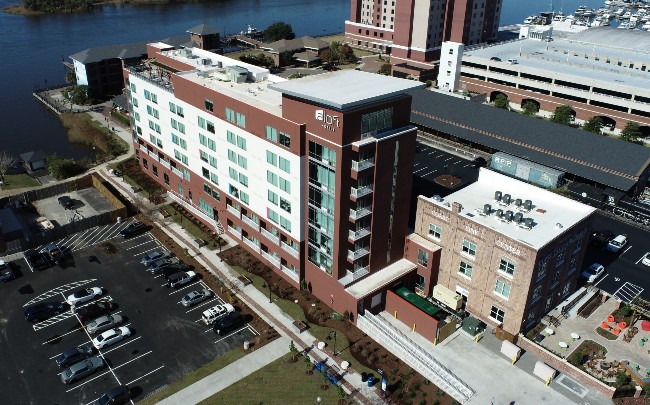 The new downtown hotel is operated by Poteat Hospitality Associates of Laurinburg and located on the Riverwalk.

The lobby and meeting spaces give nods to this heritage, with high ceilings, exposed brick walls and the building’s original wooden beams, a news release stated.

The hotel’s guest rooms include 12 suites and 11 corner rooms with balconies,
and all rooms feature king or double queen beds.

With meeting spaces ranging from 500 to 7,800 square feet, Aloft Wilmington at Coastline Center has the capacity to host intimate gatherings to weddings of up to 400 guests, according to the release.

"Unique to the hotel is the Aloft Coffee Bar, a specialty coffee and pastry experience. Guests and the local community can indulge in sweet and savory treats and breakfast pastries made inhouse by the hotel’s pastry chef," according to the release.

“Our entire team is so excited to bring this fresh, new offering to downtown
Wilmington’s hotel scene,” said Ken Lile, general manager of Aloft Wilmington at
Coastline Center, in the release.

Poteat Hospitality bought the site for the new hotel, the Coastline Conference and Event Center property, and the neighboring Best Western hotel in 2016. The general contractor for the project was the Clancy & Theys Wilmington division.

Visitor spending way up in 2021 in Cape Fear region