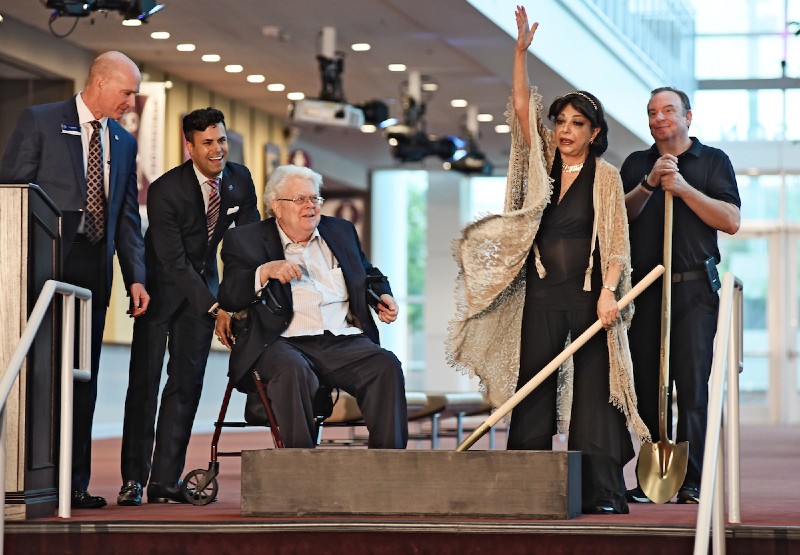 CFCC held an event on Tuesday to announce Wilson Center expansion. From left to right, Jim Morton, Shane Fernando, Henry and Roya Weyerhaeuser. (Photo by Michael Cline Spencer)
Cape Fear Community College’s Wilson Center will undergo an expansion with a new addition accessible from its lower lobby, according to an announcement.

The expansion project will be initiated thanks to a $500,000 donation from lead donors Henry and Roya Weyerhaeuser.

The preliminary design of the project involves expansion into the existing lower lobby space and into a portion of the existing courtyard, Sonya Johnson, director of marketing and communications at CFCC, said in an email.

The anticipated timeline for the project is not yet known because the college is in the early stages of the project and is working on finalizing the design with the architects, Johnson added.

The expansion was designed by LS3P, the local architecture firm that designed the Wilson Center which opened in 2015.

Among the new features of the addition include a special event space and donor lounge, expanded student office space and Guest Services facilities, lobby support space and the relocation of Ticket Central to a more visible and accessible location, the release stated.

Details of the project were announced Tuesday at an event held at the center.

“Since the Wilson Center opened its doors to the community more than five years ago, we have welcomed hundreds of thousands of guests for Broadway productions, concerts, dance, comedy, commencements, and numerous other events,” Shane Fernando, vice president of advancement and the arts at CFCC, said in the press release. “We are excited about this new expansion, and how it will allow us to move forward with both our educational and artistic missions.”

The Weyerhaeusers have a long history with the musical arts, with Roya Weyerhaeuser enrolling at the Tehran Conservatory of Music at 6 years old and attending The Juilliard School, where she studied music, according to a Port City Daily article.