Races Ramp Up In The Area 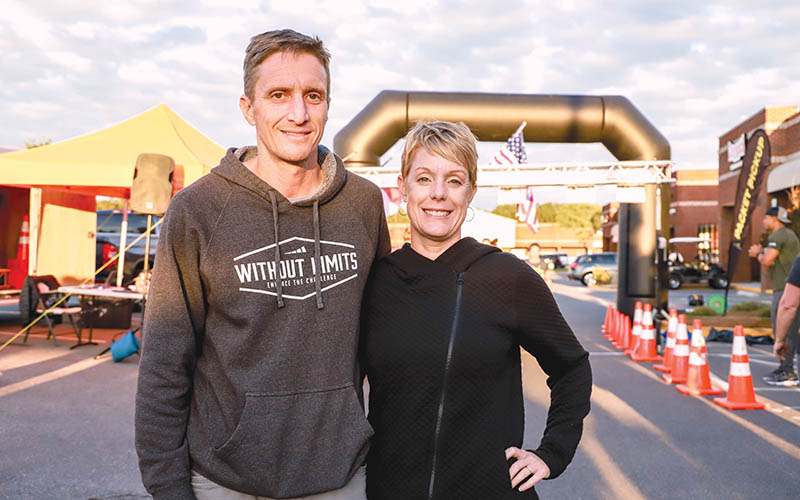 Colin and Michelle Hackman, president and COO of It's Go Time Inc., respectively, are shown at a recent race their company managed. (Photo c/o It's Go Time Inc.)
The racing community, from fun runs to endurance events such as Ironman, has a significant impact on the Wilmington economy.

While restaurants and hotels have felt the effects of many of these events being canceled due to the pandemic, so have local nonprofit organizations that depend on them as part of their overall budgets.

The Ironman 70.3 North Carolina race, formerly the Beach2Battleship, brings in millions of dollars to the Cape Fear region. It will return this fall after a pandemic hiatus last year.

“Based on the number of athletes and night/rooms, our 70.3 event usually has an economic impact of $6-7 million,” said Brian Bohrer, operations director for The Ironman Group.

This creates a significant economic impact on hotel revenue, food and beverage revenue and attraction revenue, in addition to overall tax revenue.

“The city of Wilmington will benefit in a variety of ways, with the first [being] a potential $4 million economic impact,” race director Sami Winter said.

Athletes and families can enjoy the Wilmington area beaches and local attractions.

“By working together and creating a unique athlete experience, we are able to highlight everything that Wilmington and the surrounding area has to offer,” Winter said. “… we bring over 5,000 people to the area over the course of three days.”

Even when natural disasters have impacted the area and the race was not held, Ironman still gave back to the region.

After Hurricane Florence’s catastrophic damage, the organization donated $30,000 to the United Way of the Cape Fear Area, in addition to a donation of a 24-foot box truck of water and Gatorade to area law enforcement. It also gave $25,000 in grant money, Bohrer said.

When It’s Go Time Inc., an event management company that specializes in all areas of race management, was stopped in its tracks by COVID-19, the halt also impacted the bottom lines of local businesses and nonprofits.

“Everything basically just shut down last March, April, May and June, shifting in-person events to virtual, and nonprofits could still hold events, just virtually,” said Michelle Hackman, It’s Go Time’s chief operating officer. “Business basically stopped, but since the beginning of this year, it has started to pick up drastically.”

Events like the Willie Stargell 5K Road Race went off without a hitch earlier this month, managed by It’s Go Time within the current COVID protocols at that time, she said.

“With road racing and being outside, racers do not have to be next to each other, and they actually prefer not to be,” It’s Go Time President Colin Hackman said. “People like to get out there and they are still exercising, so there has been an increase in participation.”

The Hackmans attribute the regained confidence in their events to the increase in vaccinations, and being outdoors makes participants more comfortable.

“The shutdown hit us as hard as anyone, but there is no clause for road races. The governor’s protocols were for retail and restaurant, but we are not any of those things,” Colin Hackman said. “There were a lot of widely different interpretations of the governor’s orders, but we were not included in them.”

Working closely with the city of Wilmington, the company was able to operate as a venue and go through the process to adhere to the city’s requirements.

Since the event management company supports a number of nonprofits for those with health issues, its adherence to safety was even more of a priority.

“We serve a lot of immunocompromised people, including Susan G. Komen Race for the Cure, so we are making sure that we can protect our participants with multiple underlying conditions,” Colin Hackman said.

As a partner with New Hanover Regional Medical Center, figuring out a path to promote public health by continuing to host events that encourage people to create and achieve healthy goals was imperative.

“We are all about public health for everybody and anybody, for people to set goals and do what really does work. Dr. [Philip] Brown and other leaders at the hospital sponsored events, during a pandemic, so we had to prove that we can do this safely,” Colin Hackman said.

It’s Go Time partnered as a vendor for the Wilmington Marathon in April, an event with 1,000 people running, and, Michelle Hackman said, “we are proud to say we have not had any reports of community spread.”

The Hackmans see encouraging signs that as of this Fourth of July, they hope to have “submitted their final safety protocols,” but plan to keep many of the procedures in place going forward, including having hand sanitizers and wipes on hand to promote cleanliness.

“We’ve learned to not predict the pandemic and action elected officials will take. In the beginning months, protocols and requirements changed almost weekly,” Michelle Hackman said.

It’s Go Time just celebrated its 10th anniversary May 1, and the Hackmans are excited about its future as the post-pandemic outlook looks bright.

“We have a reputation of producing fluid events that run well,” Colin Hackman said.

They also have a reputation for bringing people into the Wilmington area during seasonal downtimes, serving as a boost to the local hospitality industry.

“Wilmington is awesome, and it’s surrounded by water, so people want to be outside, and the people we serve typically come for those shoulder season events like the Turkey Trot and the Battleship Half Marathon, not during the big tourist season,” Colin Hackman said. “It is a boost for hotels to have that energy coming in when they are usually 40 to 50% booked.”

It’s Go Time partners with hotels for their larger events including the Battleship Half Marathon in November and the Wilmington Full and Half Marathon in March that are “bigger, more destination events” that host thousands of runners, many from out of town.

“Ironman purchased the most popular triathlon in the region, and that happens because it is here,” Colin Hackman said. “Our races bring in high-income families with a lot of disposable income for travel, and they all need a place to sleep, eat and things to do, and Wilmington provides that.”