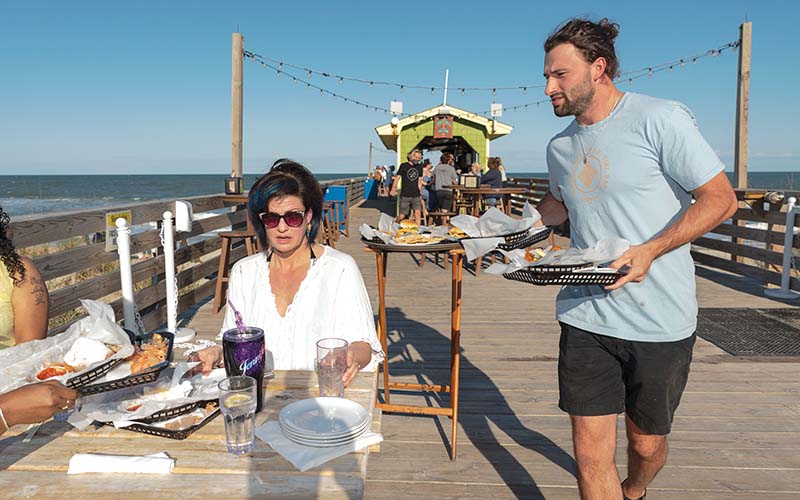 Jimmy Sullivan serves food to a table on the pier at Ocean Grill and Tiki Bar in Carolina Beach. Restaurants throughout the region are understaffed. (Photo by Michael Cline Spencer)
"Now Hiring” signs dot the commercial landscape these days. After many months of a COVID-plagued economy that forced companies to furlough or lay off employees, a return to economic opportunities surely should be good news.

Many small businesses, however, find their rebound constrained by a lack of workers.

The hospitality industry is having a particularly difficult time in staffing up, by all accounts. That presents complications for the Cape Fear region, which depends heavily on tourism. The tourist season traditionally begins on Memorial Day, which is May 31, but this year, flocks of visitors have been traveling to the region before then.

“This year, we’re extremely understaffed and having a hard time meeting the demand,” said Abbie Sinclair, co-owner with her husband, Dave, of Ocean Grill and Tiki Bar in Carolina Beach. “Everybody is so ready to go out dining and drinking. So many of our summer employees are college students, and we’re ready for them to come home. In the meantime, our other employees are sometimes working a double shift. We’re trying not to burn them out.”

With large numbers of people becoming vaccinated against COVID-19 and tiring of a life lived close to home, demand for beach time is swelling even earlier than usual.

“We’ve already started off having numbers that we haven’t had in a while,” Dave Sinclair said in early May. “I think everyone’s feeling like they can finally cut loose. I know for a fact it’s going to be a very busy summer.”

Abbie Sinclair attributes an early start to the season partly to the fact that more people moved to the beach, at least temporarily, during the COVID-related workplace shutdowns.

“There are more people living in Carolina Beach these days, working remotely,” she said. “We’ve done a lot of things right: We’ve been very diligent about keeping our staff healthy as well as keeping customers safe. People know we are a safe place to go.”

The Sinclairs are fortunate: They have a “pretty solid crew” of kitchen workers and bartenders who have been with the restaurant for many years, according to Abbie Sinclair. She and her husband have tried to reward that loyalty by keeping these staffers employed; a PPP loan helped them do that. The Sinclairs’ daughter put off going to college for a year and recruited similar-minded friends to help out as servers last summer and in subsequent months. Their son, a high school student, washed dishes and found friends willing to help there as well.

Even with the ability to have higher customer levels because the state lifted capacity mandates May 14, Abbie Sinclair doesn’t think her eatery will open all its tables any time soon.

“We probably won’t go back to full capacity this year,” she said. “We are having a hard time keeping up.”

Embassy Suites by Hilton Wilmington Riverfront is having staffing challenges that affect all aspects of its customer-facing operations.

“We’re currently looking for applicants for any and all positions,” said Zach Brigman, the property’s general manager. He’s got openings in everything from banquet service to housekeeping.

And he’s not seeing a lot of interest.

“During the ramp-up [of operations] that started a few months back, we are finding that we’re getting less applicants than we normally do,” he said. “When we call applicants to schedule an interview, people don’t show up for the interview. Or people are offered a job and accept, they fill out the paperwork but don’t show up for work. Or they don’t even show up to complete the onboarding paperwork.

“When we’ve reached back out to them, they tell us they took another job elsewhere; they provide various reasons,” Brigman added. “I have been experiencing – a lot of other East Coast hotels are experiencing – similar trends. It’s a challenge. I can only speculate as to why people are not showing up, not doing what we thought they would do.”

Brigman said he and his staff have looked at every facet of the property’s operations and have created a variety of incentive programs to attract personnel. To date, they can’t tell whether these incentives have borne fruit.

“It’s too early to say,” he said. “I’ve talked with many of my colleagues in the Norfolk [Virginia] area, Wilmington area, Miami area, California. A lot of people are seeing the same thing. We are trying to pull out all the stops, but 95% of the applicants we invite don’t come in for an interview.”

There’s a public debate over the impact of the federal government’s enhanced unemployment benefits, which were extended through September. Some pundits and small business owners believe the federal supplement has made it more attractive for laid-off workers to stay home rather than return to low-wage jobs.

Others disagree, saying that some workers are afraid of the risk of contracting COVID in the workplace.

Back-of-house staff, like line cooks and dishwashers, have been especially at risk for COVID contagion, states a May 3 article in Eater magazine, a publication of the food and dining network of the same name.

“There is no mask in the world that’s going to protect you from being next to someone for eight hours a day in that hot environment,” he is quoted as saying.

Even with vaccinations on the rise, many people are afraid of returning to jobs in those conditions, the article states. And that fear is reinforced by data.

The Eater story cites a February study from researchers at the University of California San Francisco, which found that line cooks had the highest mortality rate during the height of the pandemic in the U.S. Even when cities were supposed to be under lockdown, plenty of restaurants were open for takeout and delivery, and “back-of-house staff were bearing the brunt of the labor and the risk,” the story states.

There’s a further factor mentioned in the Eater article: Most servers and bartenders count on tips as a substantial portion of their income. With restaurants and bars operating at limited capacity, fewer patrons equaled less money in tips. That means a front-of-house worker was putting his or her health at risk while perhaps working fewer hours and earning less in tips. And many servers and bartenders, like other hospitality workers, can’t afford health insurance.

Ray Worrell, owner of Wilmington’s Slice of Life pizza restaurants, believes that some laid-off restaurant workers have found other jobs and won’t return to their former employer – at least not yet. And, he said, some University of North Carolina Wilmington students, usually a predictable source of tourist-season workers in the Wilmington area, may have decided to live at home and take classes remotely this year, making them unavailable for local employment.

“Outdoor dining is now permitted at 100%, so the rooftop bar can go to 100% but operationally I can’t do that; to ensure a good experience for all, I can’t do that,” he said. “We’re in business to make money but at the same time provide a good experience for all our guests. When we get to the summer season, demand is going to be very strong, I believe. From industry folks I’ve talked with, I expect to see some long waits at various restaurants. Every industry person or owner is facing the same challenges with staffing.”

Add to that the recently announced appearance of Widespread Panic, the band that will open Wilmington’s new Riverfront Park concert venue in July.

“When it was announced that Widespread Panic was coming, we saw a big boost in demand [for rooms]. It will be a very busy week here in Wilmington,” Brigman said.

While the labor shortage is painful for businesses, it presents many opportunities for willing workers who are looking for entry-level positions, according to one local restaurateur.

“The whole job market is up a couple of dollars per hour,” said Hayley Jensen, co-owner of Beer Barrio in downtown Wilmington. “Jobs that used to pay $9 to $10 an hour are now offering $11 to $12. It’s a great time to look for a job because everyone is paying more.”

Outdoor recreation gets a statewide voice