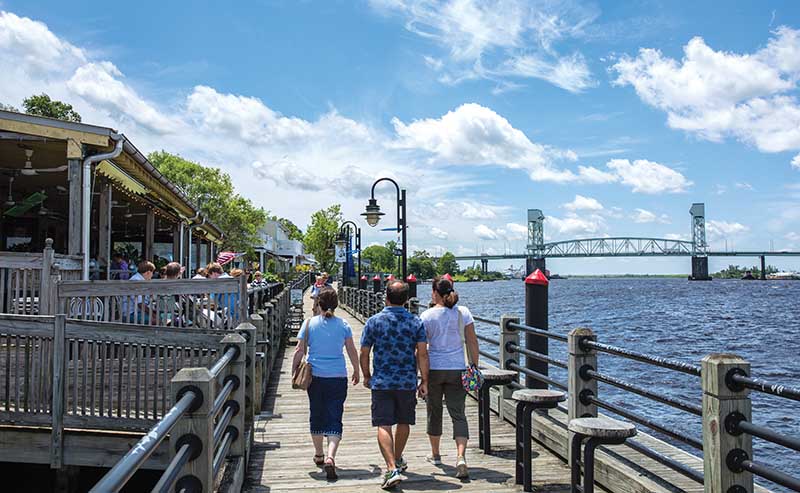 The Riverwalk in downtown Wilmington earned the second-best Riverwalk ranking in USA Today's 10Best Readers' Choice travel award contest.
Area residents, business owners and city leaders have said they are proud that the Wilmington Riverwalk was recognized as the No. 2 Riverwalk in USA Today’s 10Best Readers’ Choice travel award contest in January. They hope the honor will build momentum toward the Riverwalk’s continued progress and its effect on the local economy.

The Riverwalk runs 1.75 miles along the Cape Fear River in downtown Wilmington with a number of restaurants and retail shops available to walkers. Its growth continues to inch northward with construction of projects past North Waterfront Park, which is slated to open this summer.

As of press time, Wilmington City Council members this week were scheduled to discuss a $230,000 agreement with the Aloft Hotel developer to build a 300-foot access to the Riverwalk. If approved, it would connect Water Street to the Riverwalk behind the new hotel at the foot of Red Cross Street.

“The Riverwalk is symbolic of downtown Wilmington. It is consistently in the top five of what people mention about what they love about downtown Wilmington,” said Holly Childs, president and CEO of Wilmington Downtown Inc. “It is a great tourist attraction, especially with all the shops and restaurants that draw people to downtown. It’s a real magnet for the downtown area.”

The Riverwalk is considered an asset to the city as a destination for tourists, but Childs believes it is an attraction for area residents too.

“It is important for us to be externally recognized as one of the top Riverwalks in the country, but it is also good for us internally, so that locals realize what is available to them in their own town,” Childs said.

One new resident of Wilmington who recognizes the significance of the Riverwalk is Jamie Branda, owner and operator of Floriana Restaurant on the corner of Market and Water streets.

With a delayed opening because of the COVID-19 pandemic, Branda’s Italian dining establishment opened last Memorial Day weekend, and he attributes its success to its proximity to the Riverwalk.

“The Riverwalk has been absolutely central to what we do. We would never have gotten through this pandemic without having those balconies out there [overlooking the Riverwalk],” Branda said.

“We are confident in what we do, but we are the new guy in town, and the location tempted many people inside and have made regulars out of those who just wanted to see the battleship or watch the sunset,” Branda said.

The continued progress of the Riverwalk is something that Branda says will only encourage people to come and walk along the river and enjoy the scenery.

“It has always been an asset, a great marketing tool, and when people are considering staying in our area, they always ask, ‘How close am I to the Riverwalk?’” said Terry Espy, president of the Downtown Business Alliance.

One example of the impact of the Riverwalk that Espy shared is the story of the gelato shop, Gelarto, whose back door opens onto the Riverwalk.

“They went through great lengths to have the city allow them to have a door that opened directly on the Riverwalk … and it’s a real asset to them,” Espy said.

Restaurants with outdoor seating on the Riverwalk also benefit from those walking by who decide to stop and give the business a try, according to Espy. With the growth of the north end of the corridor, Espy expects additional advantages for businesses along the Riverwalk.

“The north end is going to change dramatically,” Espy said. “It will be a different look on that end with the amphitheater [at North Waterfront Park].”

Both WDI and DBA would like to see all areas of the Riverwalk cleaned and maintained regularly, as well as lighted for year-round use.

“It is a treasure, and we need to invest in the Riverwalk in terms of its general maintenance and upkeep as well as adding lighting all along it,” Childs said.

“There needs to be a concerted effort for better maintenance along the Riverwalk, not just the new part. It needs some love, and we need to make sure we pretty up the Riverwalk every spring,” Espy said.

Illuminating the Riverwalk will require a “unified vision,” Espy said for it to draw people to downtown year-round.

“It’ll be a huge effort to see the Riverwalk lit up permanently with LED lights, but drawing people to the riverfront in the dead of winter and over the holidays should be our goal,” Espy said. “We shouldn’t be behind the pack; we should be leading the pack.”

Wilmington Mayor Bill Saffo agrees that the regional attraction should be an effort that serves the needs of the entire community.

“I think it needs to be a coordinated effort from the business community, especially businesses along the Riverwalk, from south to north, on how this thing should look and how to enhance the experience in the off-season in order to make it a year-round attraction,” Saffo said.

He said he recognizes that lighting the Riverwalk has “a lot of merit to it,” but the concerns of downtown residents need to be considered as well.

As far as maintenance is concerned, Saffo agrees that the Riverwalk is a city investment that has been paid for by taxpayers over several years, which benefits the region. Because of that, he said he believes there has been discussion to look at funding from other sources of revenue.

“Not only has the Riverwalk been named No. 2 in the country, but it has also been recognized as the No. 1 destination for people who choose to visit or migrate here,” Saffo said. “It is part of the wider infrastructure investments we need to make to anticipate growth and stay ahead of it.”

Wilson Center springs back to life