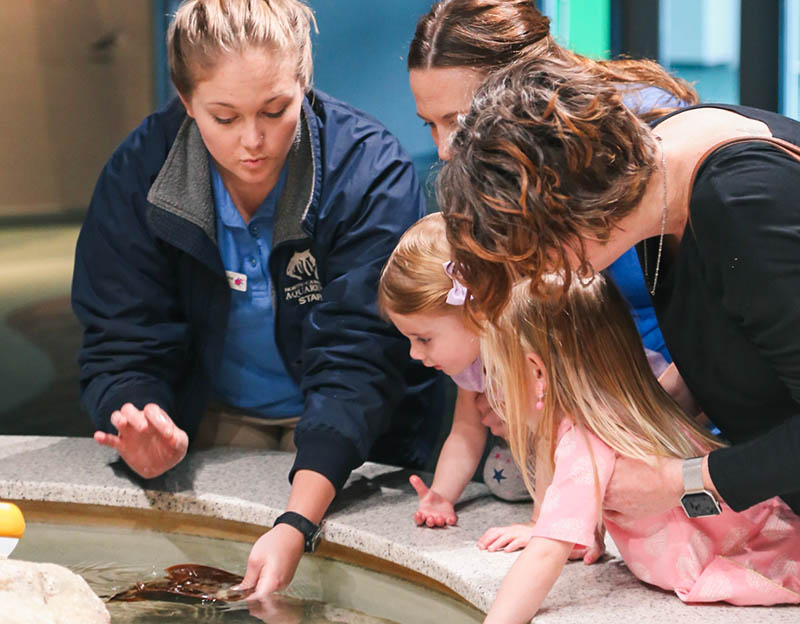 School groups have canceled trips to the N.C. Aquarium at Fort Fisher because of coronavirus concerns. (File photo)
One of the Wilmington area's biggest industries – tourism – is feeling the effects of the coronavirus, as school trips to local attractions are canceled, along with volunteer opportunities and other previously scheduled events.

On Thursday, the number of confirmed cases of COVID-19 increased in North Carolina to 14 (from nine on Wednesday), according to state news outlets.

Although no coronavirus cases had been reported in New Hanover, Brunswick or Pender counties as of 2 p.m. Thursday, the highly contagious disease is at the forefront of discussion in Southeastern North Carolina.

School field trips, primarily from school districts outside the area that were scheduled to visit the N.C. Aquarium at Fort Fisher and the Battleship North Carolina this spring, have been canceled, officials at the area attractions said.

At the aquarium alone, 16 school groups have canceled field trips, totaling more than 1,400 students, teachers and chaperones. The aquarium does not charge admission to schoolchildren on field trips, but schools do sometimes schedule additional programming there for a fee, said Robin Nalepa, the aquarium's communications manager.

The 16 groups that have canceled were from the following counties: Cabarrus, Columbus, Cumberland, Durham, Hoke, Lee, Mecklenburg, Robeson and Wake.

Battleship spokeswoman Stacie Hidek said in an email Thursday afternoon, "Out of an abundance of caution for our visitors, volunteers and staff we are postponing this weekend’s Hidden Battleship until November and canceling the Battleship 101 that was scheduled for March 21. Both events historically have attracted visitors from far outside the area.

"The Battleship will monitor the COVID-19 situation and make decisions regarding events scheduled in April closer to the dates. The Battleship remains open to visitors daily from 8 a.m. to 5 p.m."

Of school field trips, Hidek said that many North Carolina public school systems are canceling field trips this spring or limiting them to within their own counties.

"This has led to cancellations at the Battleship," Hidek said.

Future field trips to Cape Fear Museum had not been canceled as of early Thursday afternoon, but the museum did postpone an event.

"The health, safety and well-being of our visitors is our top priority at Cape Fear Museum. Out of an abundance of caution, our Experience STEM-ILM 2.0 event for tomorrow, March 12 has been postponed," officials stated in a release. "As recommended by New Hanover County officials, social distancing is encouraged and event planners should take extra steps to prevent the impact of COVID-19 in our area."

Earlier this week, Wilmington International Airport officials said a nonstop flight to Chicago between ILM and Chicago O'Hare will be subject to a two-month suspension beginning in April because of a decrease in air travel demand brought about by the coronavirus.

At least one nonprofit in the region is also being affected by canceled travel plans.

Typically in the spring, Wilmington Area Rebuilding Ministry, which has rebuilt more than 1,350 homes in its 24-year history, welcomes university students for spring break volunteer trips.

Some of the students come from as far away as Indiana and North Dakota.

But the coronavirus pandemic has resulted in a change.

"This year, spring and summer out-of-town teams from 27 states are registered to visit our region to volunteer with WARM," stated a news release this week from the group. "Due to fear of COVID-19, many of the teams are not allowed to travel or are choosing not to make the trip."

JC Lyle, WARM's executive director, said in the release, “While we have amazing local volunteers year-round, we rely heavily on the Spring Breakers this time of year. Many bring 20-40 people and work on four or more homes during their week here. Having three teams cancel so far, and more expected, will slow us down tremendously. These families, who have already waited 18 months, are very disappointed they will have to wait even longer.”

This week, three teams from universities in Massachusetts, Florida and Georgia canceled their trips. These volunteers would have worked on a combined five homes damaged by Hurricane Florence, according to the release.

"In Brunswick, New Hanover, and Pender Counties, approximately 325 homeowners wait on the Hurricane Florence lists of various nonprofits and faith-based home repair ministries," the release stated. "New applications are still coming in weekly as people exhaust all their resources and realize they can’t recover on their own."

As a result of the canceled trips and the need, WARM is ramping up volunteer recruitment efforts for local and out-of-town individuals and teams, the release stated.

Earlier Thursday, New Hanover County Schools issued a statement about postponements and cancellations, including the postponing of its annual Best Foot Forward talent showcase that had been scheduled Friday for the Wilson Center.

"Organizers are researching alternative date and venue options," according to a news release from NHCS. "In-district NHCS sanctioned field trips will occur as scheduled. All out-of-district NHCS sanctioned field trips are canceled as of Monday, March 16, 2020. Exceptions will be reviewed by the Interim Superintendent’s designee on a case-by-case basis per principal’s request."

Races ramp up in the area