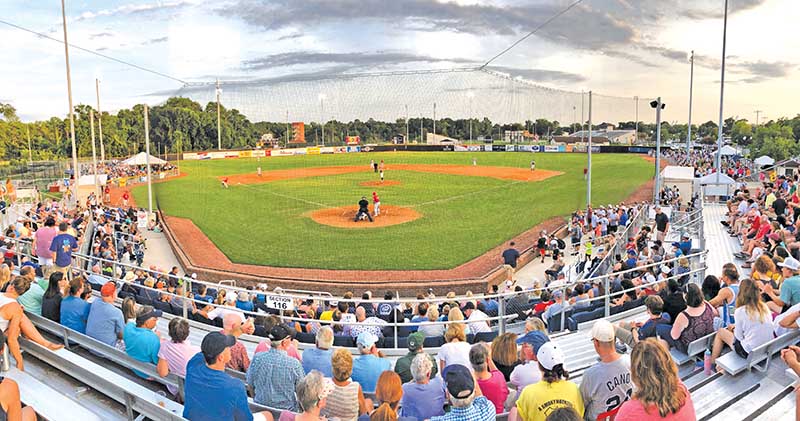 That is according to Matt Perry, co-owner and president of the Wilmington Sharks, who said renovation and funding plans need to be settled with the Legion Stadium Commission as soon as possible.

To boost backing from the community, Sharks officials on Wednesday asked its partners and attendees to reach out to county and city leaders to express their support for renovations.

The Sharks proposed a $2 million renovation for which the Sharks would pay a third.

Renovations, according to the Sharks, would address issues at the publicly-owned stadium including flooding, electrical failures, limited shaded areas and its small seating capacity for the size of the Wilmington market, among other issues.

“We have to be able to offer the experience we want to offer to the fans,” Perry said. “And at the same time, draw the number of fans that we think we can, to make us as much of an asset to the community as we possibly can be.”

While no decisions were made on funding during the meeting, Perry said a plan needs to be determined soon that settles logistics, such as balancing the different entities involved.

Amy Beatty, community services director with the City of Wilmington and staff liaison for the commission, said in an email that one of the takeaways from the meeting was that there is a consensus among the city, county and school board that the requested and proposed improvements are a good idea conceptually.

"Although the improvements may not result in a significant revenue boost, having the Sharks remain in Wilmington is good from a quality of life perspective," Beatty said. "However, there are significant obstacles to the government entities agreeing to the proposal."

Those include money and programming and site constraints.

"The City does not have a project programmed in its Capital Improvement Program for Buck Hardee Field. While the City recognizes some improvements have merit and are needed, other capital needs by the City (road resurfacing, public safety buildings, transportation bond and parks bond projects to name a few) have been prioritized higher than improvements to Buck Hardee," she said.

Buck Hardee Field and Legion Stadium are the home athletic fields for New Hanover High School and there is a binding agreement that prioritizes New Hanover’s schedules, Beatty said.

That may limit the suggested enhanced uses in the Shark’s proposal, she adds.

"Because Buck Hardee is home to the NHHS baseball team, Title IX compliance is a factor," she said. "Title IX essentially requires public educational institutions to provide equitable athletic facilities for men’s and women’s teams. If additional improvements were made to Buck Hardee, would that call in to question whether the women’s softball team plays in an equitable facility?"

Renovations are mostly needed because of the growth the stadium has experienced, Perry said.

“We've really struggled with the inefficiencies of the ballpark the last couple of years as we've been growing and they just get compounded the more people we try to put in there,” Perry said.

According to the email from the Sharks seeking more community support,  attendance has almost doubled since 2017 under its current management.

“We are a business and we've got to make a good business decision,” Perry said. “We want to stay here, but if the prospect is that we're going to have to bang our heads on the wall for another three years dealing with the issues with the stadium, then we have a decision to make if that makes good business sense.”

Discussions on renovations have been going on for more than a year, Perry said.

The Sharks’ current lease at the stadium expired last year and was extended so a plan could be developed.

While the option of leaving Wilmington is a possibility, the Sharks want to focus on working with the committee to come up with a solution all can agree on, Perry said.

“We're not fans of operating in the environment of ‘do this or we will leave,’ but, as a business, we have to say that this is critical to our long-term future in the market,” he said.

In the spring of this year, the Sharks need to inform the Coastal Plain League of its plans for the 2021 season, according to the Sharks' email.

There is no set date for when the committee will meet next, but Perry said it will be “very soon.”

If funding and a plan for renovations are achieved, the Sharks plan on entering a 10-year lease extension to remain in Wilmington, according to the Sharks email.

Renovations will not only boost attendance for baseball games, the Sharks have proposed bringing a soccer franchise to Wilmington if renovation plans move forward.

“Our message has consistently been that if we can figure something out that helps renovate the baseball facility, our organization has interest in expanding our sports presence in the market and looking at bringing soccer back,” Perry said. “We're hopeful something gets done on the baseball because our scope and desires expand beyond just baseball in the market.”