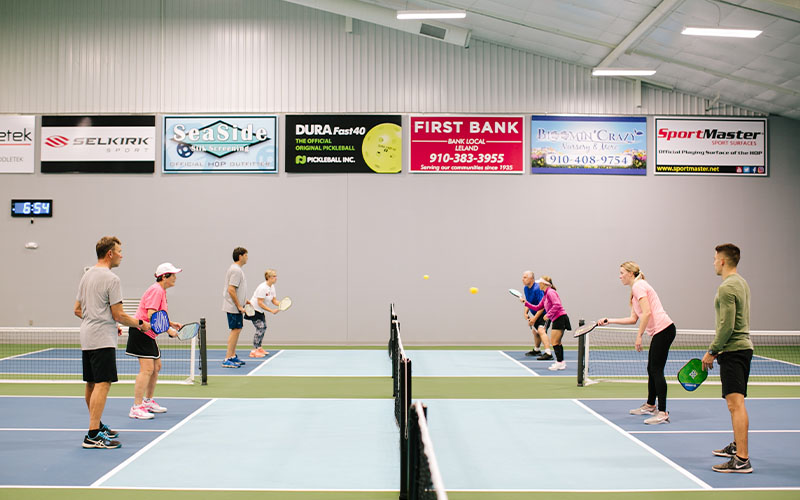 Players practice pickleball, a sport that’s growing in popularity in the area, at the House of Pickleball in Leland. The HOP, as players call the facility, opened last year. (Photo c/o House of Pickleball)
When you’re looking for some beach time, one of the many beaches in the area will do the trick. When history or theater is calling your name, downtown Wilmington has the answer to your yearning.

But when you want to socialize and engage in a multi-generational activity, Leland has a place to go: the House of Pickleball.

The popularity of pickleball in Leland has made it a tourist attraction.

Multiple tournaments throughout the year have drawn crowds, and there’s an estimated 3,000 or so pickleball players in the Cape Fear region, according to House of Pickleball owner Richard Holloman.

“We have more pickleball players in this part of the geography than any state other than Florida and Arizona,” Holloman said. “We draw people from multiple states and other countries who come to play.”

Holloman spent more than two years researching different pickleball facilities in and around the Southeast making notes about features he liked or didn’t like to design and build his House of Pickleball or “The HOP” as locals call it.

According the website, “The HOP is a world class, privately owned, yet public facility that features only pickleball.”

“It has outdoor features made for indoor with nine layers of cushion to make a more comfortable playing experience. No bugs, no rain, no humidity; all of these factors come into play,” Holloman said. “And the surface is easy on the knees, ankles and hips.”

Within the next six months, The HOP will host four tournaments bringing in people from all over the state. Last year, a tournament brought people to The HOP from seven states and two other countries.

“It’s been great for the town, great for the residents. It is serving that need,” said Niel Brooks, Leland’s assistant town manager. “It’s a good partnership. People call the town and we point them to Richard [Holloman]. It’s a symbiotic relationship.”

The symbiosis is more apparent since Holloman serves on the Tourism Development Authority (TDA), which has been marketing the Leland area to tourists.

The HOP and the area’s active pickleball community is a major draw, as well as the town’s kayaking opportunities in Sturgeon and Town creeks.

“Leland has some exciting plans for future parks to get people to visit the area, and as the town grows and develops, opportunities develop and the TDA is looking to support businesses,” Brooks said.

Supporting businesses is a goal of Leland’s TDA, which has a grant program that encourages people who host events through their businesses, like The HOP, that build tourism opportunities.

“We have an open-for-business model that is willing to support private ventures.,” Brooks said. “Our grant program is not limited to nonprofits; if it is going to draw tourists, it is open to private businesses.”

Brooks explains that the ever-increasing popularity of distilleries and breweries are businesses welcome to apply for the grants and will be included in the TDA promotions. Private business ventures that have events as part of their business plans are also encouraged to apply.

Popular among retirees, the sport has gained momentum in all age groups.

“You can pick it up fairly easily, and it’s not just retirees; it’s the youth too,” Holloman said. “Pickleball is being taught in a lot of schools too.”

The HOP offers courses to learn to play pickleball and promotes what Holloman calls, “level play,” where players are matched by similar abilities so they’re not discouraged.

“We have all levels from beginners all the way up to professionals,” Holloman said.

In addition to being a fun sport, pickleball is also a great way to meet new people.

“The key to pickleball is it’s a very social sport and very easy to engage with others,” Holloman said.

Where many communities may have private pickleball courts that are open to only community residents, The HOP is opened to players from all over the area.

Not only is the sport recruiting tourists and residents, it serves as a way to maintain them. Holloman tells of three women who were not enjoying living in the area and considering moving back North until they discovered pickleball.

“I can’t overemphasize the social side of the sport. It creates the growth,” Holloman said.

“We have neighborhood sections at The HOP where different neighborhoods can meet up and bring in food and just play and enjoy each other’s company,” he said.

As part of the TDA board, Holloman says pickleball is bringing people “across the bridge” and serving as an economic asset.

“People who live in Leland were always crossing the bridge to Wilmington all the time, but now there’s a reason to come to Leland,” Holloman said. “Now we’ve got a lot of people coming from Wilmington and coming across the bridge the other way.”

Pickleball is now a major feature of Brunswick Forest’s Coastal Discovery Tour, which introduces out-of-towners to the area. The HOP was recently featured on UNC-TV, and will be featured in Our State magazine early next year.

Leland’s TDA has even featured the sport in three separate tourism promotion videos.

“We have a lot of growth going on here,” Holloman said, “and pickleball is a great tool.”