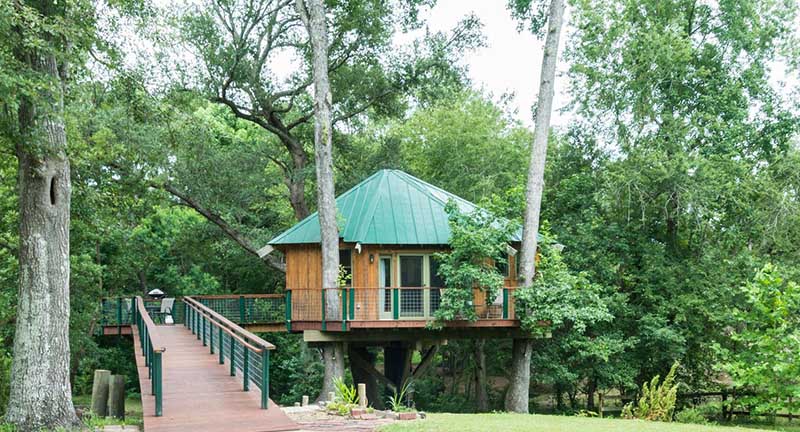 A tree house in Wilmington is titled "Live in the Trees!" in its popular Airbnb listing. State and Airbnb reports show that the vacation rental platform complements rather than competes with traditional hotels. Photo c/o Airbnb host
While alternative lodging offered through Airbnb is gaining in popularity – and availability – travel officials say it’s not necessarily hurting hotels. But it is benefiting travelers in more ways than one.

data indicates that Airbnb and the vacation rental host community appear to be complementing – rather than competing with – the North Carolina hotel industry, stated an Airbnb news release.

And according to the most recent state-commissioned lodging report, North Carolina hotels are experiencing “explosive growth in overall occupancy, revenue and prices – in parallel with short-term rental growth,” the release continued.

The latest report by Visit North Carolina showed that hotel occupancy increased 4.9 percent statewide in May, over the same month the previous year.

Meanwhile, the rate in the Southeast region jumped 20.8% in May, compared to May 2018. Brunswick, Carteret, Craven, Duplin, Greene, Jones, Lenoir, New Hanover, Onslow, Pamlico, Pender and Wayne counties comprise the Southeast region, according to the report.

As for the boon to travelers, lodging platforms like Airbnb can provide variety.

“Short-term rentals are a growing travel trend across the U.S., including Wilmington and our beaches,” said Wilmington and Beaches Convention and Visitors Bureau spokeswoman Connie Nelson. “[They] appeal to travelers who prefer to stay in a home-like environment instead of a traditional hotel or bed-and-breakfast inn.”

Airbnb has also opened unique travel options that once didn’t exist – at least not as easily. With the click of a mouse, vacation rental searches can be filtered to “unique stays,” and instantly booked.

Locally, these listings include a Wilmington treehouse, The Robbin’s Nest, that boasts 152 five-star reviews (as of press time) and is titled “Live in the Trees!” Meanwhile, Carolina Beach’s “Modern Beach Container Home #1” fits the bill for fans of the tiny house trend.

As the “experiential travel” trend continues, where travelers immerse themselves in a destination by experiencing its culture, history and the like, the hotel industry is also taking note. Where the concept of neighborhood-type stays has become commonplace thanks to Airbnb, and other similar services like VRBO, many hotels are now following suit.

For example, one of New Hanover County’s newest hotels, ARRIVE Wilmington at 101 S. Second St., is blurring the hotel and guest house line. The property – formerly The Wilmingtonian – features a communal courtyard with brick fireplaces, on-site restaurant Dram Yard and an outdoor movie and entertainment space.

The brand aims to create the “immersion travel” experience through local interaction and engagement. For example, the hotel’s restaurant serves its locally sourced dishes family style to encourage conversation and sharing, according to officials. The amiable atmosphere is also obtained by limiting seats to 36 guests.

“ARRIVE Hotels & Restaurants are built to welcome people to the neighborhood,” according to an ARRIVE release. The Port City ARRIVE location is the first expansion of the Palm Springs, California- based company; ARRIVE launched its first hotel and restaurant there in 2016.

With local hotels hitting capacity as the high travel season is in full swing, Airbnb has created another bonus for travelers. When hotel rooms are scarce, they increase supply.

“However, it is difficult for us to determine the economic impact because the Room Occupancy Tax collection reports are not broken down by name or type of accommodation, as this is proprietary information,” said Nelson. “For instance, Airbnb remits a lump sum and does not list specific properties.”

But the company recently announced that it delivered $24 million in state and local tax revenue to the state on behalf of its North Carolina hosts in 2018. What’s more, Airbnb hosts in New Hanover County earned nearly $13 million and welcomed 85,000 guests, according to a news release.