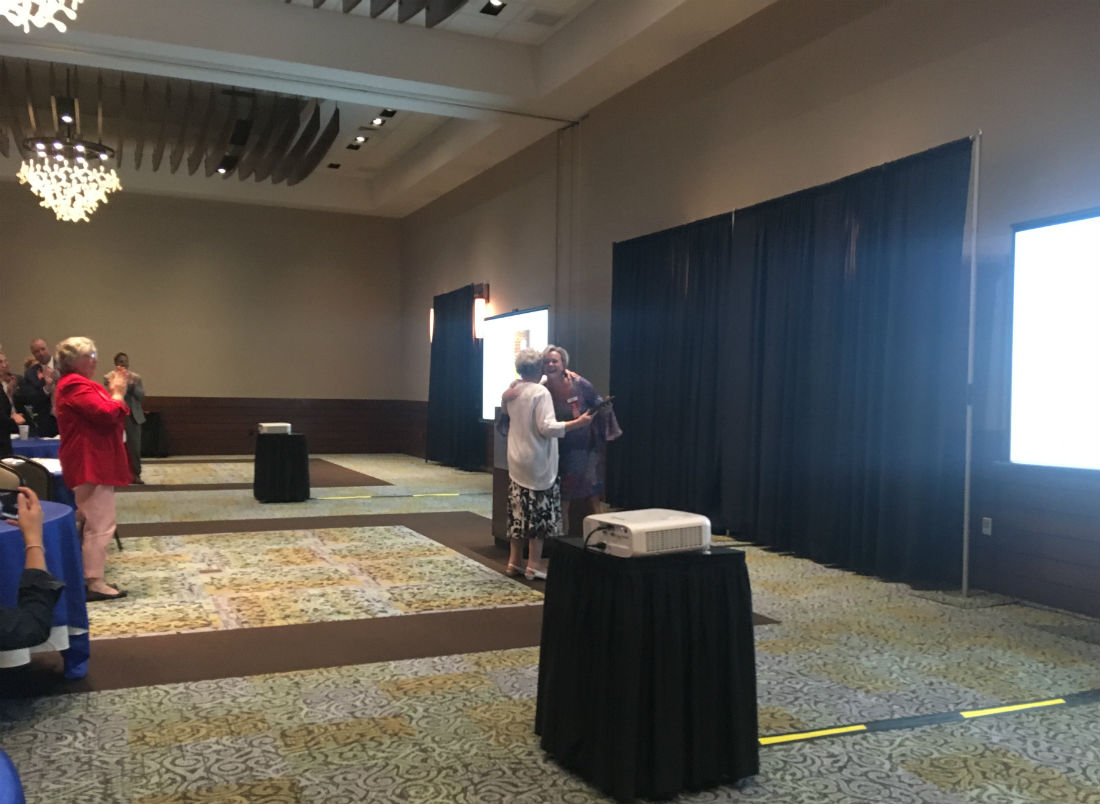 Kim Hufham presents the 2019 Tourism Pioneer Award to Jeanette Foster at the Travel Rally Breakfast where Hufham shared the CVB's marketing strategy to make Wilmington a year-round destination. (Photo by Johanna Cano)
A strong 2019 summer tourism season awaits the Wilmington region and, with a new marketing initiative, CVB hopes to attract more visitors during the off-season and establish the area as more than just a beach destination.

“We are going to have a very strong spring and summer,” said Kim Hufham, president and CEO of the New Hanover County Tourism Development Authority (TDA). “Communities, large and small, both urban and rural, rely on travel for economic development, job creation and tax revenues.”

Hufham, the event speaker, shared information on the CVB’s Hurricane Comeback Recovery Campaign, which she said was successful in reaching audiences and distributing the message that the region is open for business.

“We had 1.9 million e-blasts sent out during the recovery campaign," she said. "We were trying to get the word out that we weathered the storm… so that people knew that we are open, we are ready; come back and visit us again.”

North Carolina did two perception studies during Hurricane Florence recovery, one in November and another in January, which show that the hurricane did not negatively impact people's travel plans to the state and the area, she said.

“Perception is everything during one of these storms. You can put all the advertising you want to out there, but unless people are convinced in their minds with their perception of the area, we would have an issue,” Hufham said. “In November, 14% of people perceived that the North Carolina coast was back to normal and 12% perceived that Wilmington was back to normal. But we saw that by January of 2019, over 30% perceived us as being back to normal which is a great jump. We were glad to see that the perception was waning that we had had major damage.”

Hufham also presented the TDA’s three-year Strategic Destination Plan which identified the region’s top destination challenges, including being a highly seasonal travel destination and having a shortage of qualified visitor industry professionals.

Out of those challenges, the CVB developed 20 initiatives to address them, she said.

One initiative seeks to promote the area as a year-round destination that has more features than just the surrounding beaches.

Part of that promotion includes videos, shown at the event, that the CVB has worked on that feature area landmarks, as well as the local arts, food and sports scene.

Hufham said these new marketing videos have a story-telling approach, different from other CVB videos in the past.

“We have worked with various notable local chefs, musicians, artists, surfers, brewers and more to develop new marketing assets,” Hufham said. “Our special interest initiative is most relevant during our off-season times, during the fall, during spring and during winter. We are known for our beautiful beaches, we are known for our summer activity, but we need to go beyond that. We want to see our businesses grow, we want to see those shoulder seasons meet up in the middle and become a true year-round strong destination.”

“We know that travel really does matter and it especially matters here in New Hanover County,” Hufham said. “The brand now is “city and beaches,” but what we are looking forward to, as we start this initiative, is the city, beaches, food, breweries, culture, nightlife, parks, gardens, art, wellness and activities. All those we want to be able to promote.”