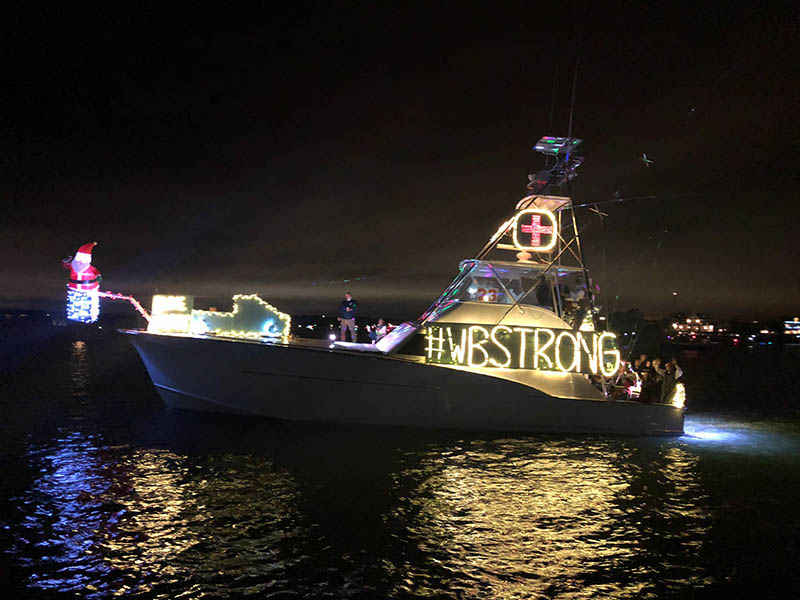 A participating boat lights up the water at the N.C. Holiday Flotilla on Nov. 24 at Wrightsville Beach. (Photo courtesy of Samantha Black)
With the 2018 holiday season in full swing, nearly a third of Wrightsville Beach’s hotel rooms remain unavailable for booking because of damage caused by Hurricane Florence.

Two of the island’s three major resorts were forced to close for repairs after the storm, which made landfall near Wrightsville Beach on Sept. 14. Both the Blockade Runner Beach Resort, 275 Waynick Blvd., and Shell Island Resort, 2700 N. Lumina Avenue, remain inoperable.

“According to our most recent room inventory, there are 1,034 total rooms in Wrightsville Beach, with 150 at the Blockade Runner Resort and 140 at Shell Island Resort,” said Wilmington Convention and Visitors Bureau spokeswoman Connie Nelson. “Surf Suites [with] 45 rooms is also closed until early 2019.”

While the three closed properties account for 335 off-line hotel rooms on the island, the overall number could be higher. New Hanover County tourism officials pointed out that there are other lodging options on the island, in addition to hotels.

“There may be some vacation rentals and individual rooms in ‘open’ hotels that were/are offline due to damage,” Nelson explained. “It is difficult to get an accurate count on every room that was not rentable and for how long.”

Regardless of the exact numbers, the loss of rooms available to rent means a revenue loss for New Hanover County. The county collects a 6 percent room occupancy tax (ROT) from short-term rentals.

Wrightsville Beach ROT collections were down 20 percent during September, over the previous year, according to officials. ROT money is used for funding beach renourishment and tourism initiatives.

Meanwhile, September’s ROT report (the most recent data available) showed a countywide increase of 18.67 percent over the same month in 2017, with the city of Wilmington experiencing a 46.66 percent jump. Like Wrightsville Beach’s ROT drop, Hurricane Florence is behind Wilmington’s hike.

“September ROT collections are not representative of a normal September,” Nelson said.

“In September, in addition to relief workers [occupying Wilmington hotels] many island residents evacuated to Wilmington lodging properties,” she explained. “The months of September, October and into November may be skewed due to housing relief workers, displaced residents and storm evacuees from surrounding counties.”

As for the closed properties in Wrightsville Beach, all three are expected to reopen by early spring of 2019.

According to Shell Island Director of Sales Meredith Swicegood, the resort “will be reopening in the next couple months.” When asked about the extent of damages and renovation plans, Swicegood declined to comment, citing privacy concerns.

“We are run by an HOA (not a management company) so it is unlike your typical hotel/resort,” she said in an email. “The HOA board would like to keep everything confidential.”

Likewise, Blockade Runner General Manger Nicolas Montoya declined to comment when asked about that resort’s revamp and estimated repair costs. He did offer some insight, however, into the decision.

“It may be premature for me to discuss some details of our renovation at this time,” Montoya said, in an email.

A Wrightsville Beach landmark for more than half a century, the Blockade Runner was initially expected to re-open early last month (November). But further assessments revealed that extensive renovations were required.

“The major cause of damage was the loss of the roof on the balcony building and more limited roof damage on the tower,” Montoya said in a news release.

“In the areas penetrated by heavy rain, operations shift from cleanup to restoration.”

“We made the decision following several weeks of analysis and assessments with engineers and experts,” added Mary Baggett, co-owner and operator of the resort, in a statement.

Although the hotel itself is closed, the Blockade Runner Beach Resort served as the host and presenting sponsor for the 2018 Holiday Flotilla, held annually Thanksgiving weekend. The resort’s sound-side lawn and docks were home to the flotilla’s headquarters, sponsors’ tent and judge’s stand, officials said in a new release.

Meanwhile, The Surf Suites announced that it has cancelled all reservations through the end of December 2018. According to the all-oceanfront suites property’s website (thesurfsuites.com), further updates will be posted as information becomes available.