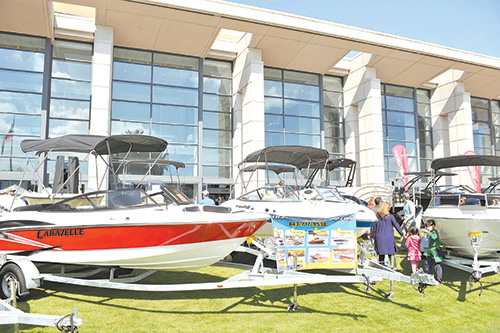 The Port City is going to host a large-scale boat show this September.

JBM & Associates, a boat show management and marketing company based out of Greenville, South Carolina, is putting together one of the largest boat shows ever staged in Wilmington, according to JBM president Jacqui Bomar.

The Wilmington Boat Show is slated for Sept. 9-11.

Bomar said she expects anywhere from 200 to 250 boats (in and out of the water) to be at the show, which will feature skiffs, cruisers, sailboats, fishing boats, yachts and power boats.

She also said JBM expects anywhere between 5,000 and 10,000 people to attend, based on the company’s previous boat show attendances. The event will have an economic impact on the city, bringing in people from all over the East Coast, according to Bomar, who added that local shops, restaurants and hotels should see a benefit.

“We have wanted to bring a quality boat show to Wilmington for more than 10 years,” Bomar said. “We knew that there was no way to hold a long-term show in the [Wilmington] Convention Center alone due to its size, and so we waited until the Port City Marina was a reality before committing to this project.”

The Port City Marina is a protected, deep-water marina with over 200 floating concrete wet slips, according to the marina’s website.

“The marina can accommodate boats up to 250 feet, with a controlled depth of 10-feet within the basin, and deeper draft slips along the Cape Fear River,” the website stated.

The show is expected to span the Port City Marina docks, its pier, space surrounding the marina, the convention center’s lawn and its exhibit hall and meeting rooms, Bomar said.

Along with boats on display and boating vendors gear available for perusing, there will also be wooden boat-building classes, fishing clinics, boat safety clinics and sailing clinics at the show. “Our plan is to have ongoing fishing seminars for adults and children, along with other types of educational sessions,” Bomar said.

Ticket prices are $10 for adults, $15 for a two-day pass, free for children 15 years old and under and $5 for seniors and military members.

JBM recently started selling space to vendors for the show. It is starting with space for 10-12 local vendors before selling the remaining space to others from outside of Wilmington.

Bomar said she believes the Wilmington Boat Show will eventually surpass the other boat shows that JBM hosts in size and attendance to become the biggest boat show the company organizes.

She hopes to make the Wilmington Boat Show JBM’s flagship show. She sees it growing it in the next five to 10 years due to its location on the East Coast and the vast number of boat dealers and manufacturers within a couple hundred miles of the Port City.