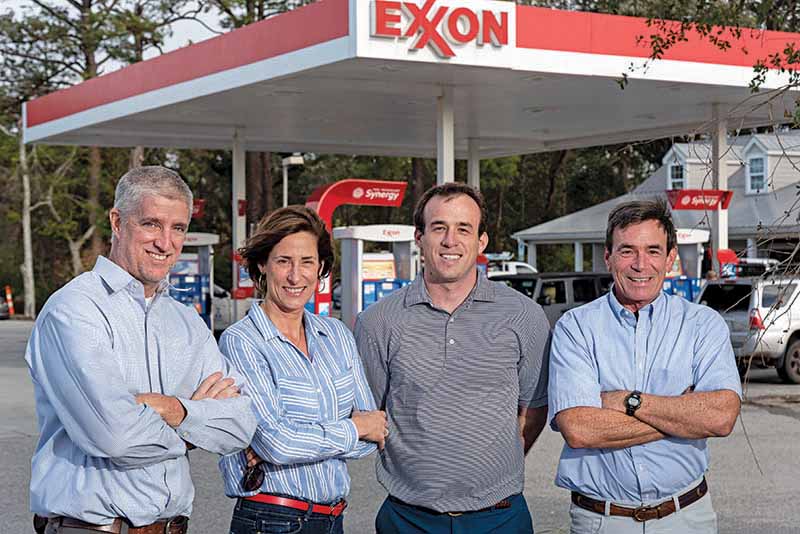 Several family members still active in the daily operations of Holt Oil Co. stand outside of the company's C-Store in the Porters Neck area. (Pictured (from left) are Bill Holt, Hannah Holt, Charles Cox and Louis Cox. (Photo by Michael Cline Spencer)
Holt Oil Co. has traditionally been a business built around the gas and retail industry.

Fayetteville-based Holt Oil Co. operates the C-Store convenience store brand throughout the Fayetteville and Wilmington areas. Its home office is in Fayetteville with a satellite office Wilmington.

The company operates 10 retail C-Stores and leases out 11 C-Store locations. It also owns and operates seven Subway and three Brrrberry Frozen Yogurt franchises, all located within the C-Stores.

But when the company was started in the 1930s by Holt’s grandfather, William deRosset Holt, in Fayetteville, it had a focus in the heating oil and kerosene business.

The company model has changed over the generations, moving into gasoline and retail stores, said Hannah Holt, who works out of the satellite office and lives in the Wilmington area, along with the rest of the company’s executive leadership.

There are five family members who are currently active participants in the company, four of whom are company owners. Four other family members are not involved in the day-to-day operations, but still hold ownership, Hannah Holt said. Of the family owners, six are women.

“We’re technically a women- owned business. It started out as an all-male ownership, and now its 75 percent women,” Hannah Holt said.

She joined the company in the late 1980s as part of Holt Oil’s third generation to work for the business. She followed her brother-in-law, Louis Cox, who now serves as company president.

“For about a year I actually worked in a store, ran the register, did all the things I needed to do to learn the business. And then we were able to grow,” Hannah Holt said of her beginnings with the family venture.

Two other family members, part of the third-generation group to work for the Holt business, took on roles in the 1990s – Hannah Holt’s cousins Bill Holt, company treasurer, and Walter Holt, vice president.

Their father, Henry Holt, and Hannah Holt’s father, Charlie Holt, both worked for the company and have since died.

Growing in the gasoline and retail areas, Holt Oil’s model expanded again into food service franchise about 25 years ago, she said.

That move, which was spearheaded by Hannah Holt, has become a profitable part of the company’s retail business. Family members running Holt Oil at the time did not know just how important it would become to add food service to their model, something that has taken off in the convenience station industry overall.

“We were visionaries and didn’t even know it,” Hannah Holt said.

Before, when her father and uncle ran the company, the goal was to “pump gasoline,” Hannah Holt said.

“That was their business model because that was where you made money. Now fast-forward 30 years later, the business model has completely changed, and you don’t make very much on gasoline,” she said. “So the goal is to try and sell as much stuff out of that store as you can, and food service, being a very important part of our business because it has a higher gross margin than cigarettes or lottery … that allows you to be profitable.”

“We definitely want to diversify and sort of see where that takes us. It might be apartment buildings. It might be mixed-use [or] retail and residential,” Hannah Holt said.

The company has not yet made decisions on how the real estate side of the business will grow.

The Holts, however, plan to build on that portion of the business while maintaining the current level of C-Store operations, she said.

And as the company has its sights set on future growth outside of retail gas stores, the family interest has also grown in the company.

Holt Oil has added a fourth generation to the mix: Charles Cox, Louis Cox’s son who joined the company last year. He is currently playing an active role in the company, however, it is still being determined where he will land within the business, Hannah Holt said.

Being able to work with family members, including her own father, has been one of the many reasons Hannah Holt says drove her to stick with the company. And though there have been challenges, the Holts have ways the family works around them, she said.

“There’s definitely the emotional part of it, being able to grow something that someone in your family has started and build on that,” she said of the reasons to continue. “There’s probably a little bit of a challenge too that you want to make your parents proud.”