Providers Increase Use Of Robotic-assisted Surgeries 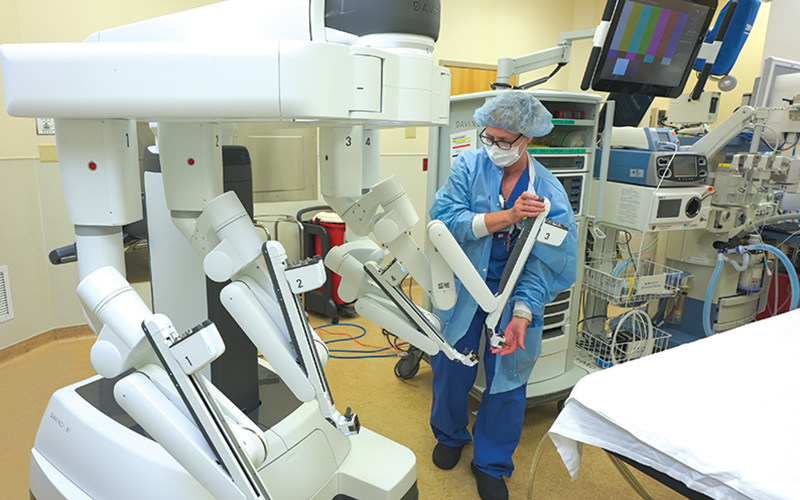 Clinical coordinator Lynn Brinson works with the da Vinci Xi robotic surgical system in an operating room at Novant Health Scotts Hill Outpatient Surgery Center. (Photo by David Hardin / c/o Novant Health)
The use of robotics in medicine is transforming how surgeries are performed and improving patient care and outcomes. At the same time, the technology is increasing operational efficiencies.

The span of robotic technology across clinical services is broad.

According to Brandon Hill, business director of surgical services at Novant Health NHRMC, gynecology was where robotics volume began and flourished for many years and is still the highest volume robotic service. General surgery is the area seeing the most growth on the da Vinci surgical system that the hospital uses. The da Vinci’s newest platform, the Xi, provides increased versatility allowing for procedures such as colorectal procedures to be performed using the robot. Additionally, gall bladder, hernia, appendectomy and bariatric surgeries are commonly performed by general surgeons.

“With every evolution of the robot,” Hill added, “capabilities have increased, which broadens the horizon of available procedures and patients who can be treated robotically.”

“The robotic device has been around in some form for 20 years or more. Only within the past five years has general surgery adopted the technology, and in the past two to three years, there has been a rapid uptake for bariatric surgery,” Stokes said.

Bariatric surgery, originally done with a large incision and then laparoscopically in the early-to-late ’90s, has progressed to robotics.

“With each evolution, patients have significantly benefitted from less pain, shorter operative times, shorter stays in the hospital, quicker returns to work and activities and less complications,” Stokes said.

He said that technology is one driver of the use of robotics in surgery. While robotic surgery is still a laparoscopic case done through four to five incisions, the robot, which connects to a tower with robotic arms controlled by the surgeon, provides a 3D visual with greater magnification and clarity. Finer dissection enables surgeons to take on more complex cases with greater confidence.

“Some of the main advantages of robotic surgery over traditional laparoscopic surgery are improved visualization and dexterity,” he said. “The improved visualization comes from the 3D high-definition screens, and the improved dexterity comes from the robotic instrument design. I am able to move the instruments just like a human wrist and hand as opposed to laparoscopic instruments that just open and close in one plane. This allows more precise manipulation of the tissue thereby decreasing post-operative pain and improving the recovery process.”

Hill said that many newer surgeons are fellowship-trained on robots and when seeking employment are looking for hospitals that can provide the latest technology including robotic access.

Stokes said there are current efforts to expand the use of robotics to other surgeries such as breast and thyroid.

“There is great interest in future robotic platforms which overlay CT scans and X-rays to guide more precise surgery,” he said, indicating that robotics is moving into both planned and emergency surgeries.

“Robotics is the way of the future,” Stokes said. “It is growing and expanding. More surgeons are getting experience and offering the technology to their patients.”