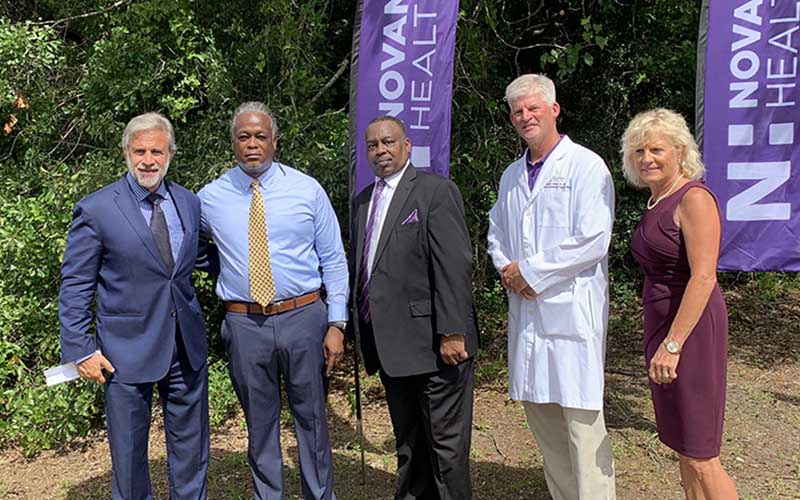 Novant, which recently purchased New Hanover Regional Medical Center, announced in February that the NBA legend is donating $10 million toward the clinics, which will provide primary care and behavioral health services.

After working with Wilmington nonprofit Cape Fear Collective on site selection, Novant announced in early July that it had selected locations at 1410 S. 15th St. and on Fanning Street, properties owned by New Hanover County and the city of Wilmington, respectively.

“After an extensive search, we identified two parcels of land that were a good fit for the development of Novant Health Michael Jordan Family Medical Clinics,” a Novant Health spokesperson said.

The New Hanover County commissioners voted July 13 to donate the 2 acres on 15th Street to the Novant Health Foundation. The site is near the county’s Health and Human Services Building.

“It is an ideal spot for Novant Health to have a clinic that can serve anyone and everyone in this neighborhood and beyond,” board chair Julia Olson-Boseman said. “I see this clinic working hand in hand with the county’s health and human services agency to provide support services and focus on improving social determinants of health for all of our residents.”

Meanwhile, Wilmington City Council is expected to take up the issue sometime in August, according to a city spokesperson.

“While the city of Wilmington owns the other identified site, we continue to work with the city and other community organizations to determine the exact location,” the Novant spokesperson said. “We want to ensure these clinics are positioned to have the greatest impact on health equity gaps. Both the county and city have played a vital role in that work, and we look forward to sharing updates in the weeks ahead.”

The Wilmington clinics would be similar to those two existing Michael Jordan Family Medical Clinics.

Such clinics fit into Novant’s goals of providing health care services closer to patients and providing better access to underserved communities, which was a significant issue as local leaders explored selling NHRMC. The sale of county-owned NHRMC to Novant closed on Feb. 1, and the Jordan announcement came just weeks after.

“These two clinics … are geared toward serving people who maybe traditionally haven’t been served too well, areas where the populations are heavily uninsured or have Medicaid,” said Philip Brown, chief community impact officer for Novant Health and former chief physician executive at NHRMC.

The clinics also build on NHRMC’s efforts to reach out beyond the hospital and directly into communities.

Gizdic said that Southeastern North Carolina suffers from some of the highest poverty levels in the state, and that on top of that, the region has some of the lowest health scores in a state that itself ranks in the bottom half of the country for health scores.

“We believe achieving health equity requires valuing everyone,” Novant President and CEO Carl Armato said, adding that there will be “ongoing efforts to address avoidable inequities, historic and contemporary injustices and the elimination of healthcare disparities in the communities we serve.”

Jordan graduated from Laney High School in Wilmington in 1981, and in 1982 he helped lead UNC to a national championship. He went on to play 15 seasons in the NBA, winning six championships with the Chicago Bulls. His last year in the NBA was 2003.

Most of Jordan’s wealth has come from endorsement deals, and, in 2012, Business Insider reported that he had become the first billionaire athlete. Jordan, now the principal owner and chairman of the Charlotte Hornets, is currently worth $1.6 billion.

Prior to the $10 million gift for the Wilmington clinics, his biggest charitable donation had been the $7 million he gave in 2017 for the Charlotte clinics.

“When we set out to partner with New Hanover Regional Medical Center, we made it absolutely clear that one of our top priorities was to improve health outcomes in Southeastern North Carolina with access to affordable care for all,” Armato added. “With Michael’s gift, we’ll be able to more quickly and directly have an impact. The establishment of these two new clinics reinforces our true commitment to improving the health of the southeast region.”