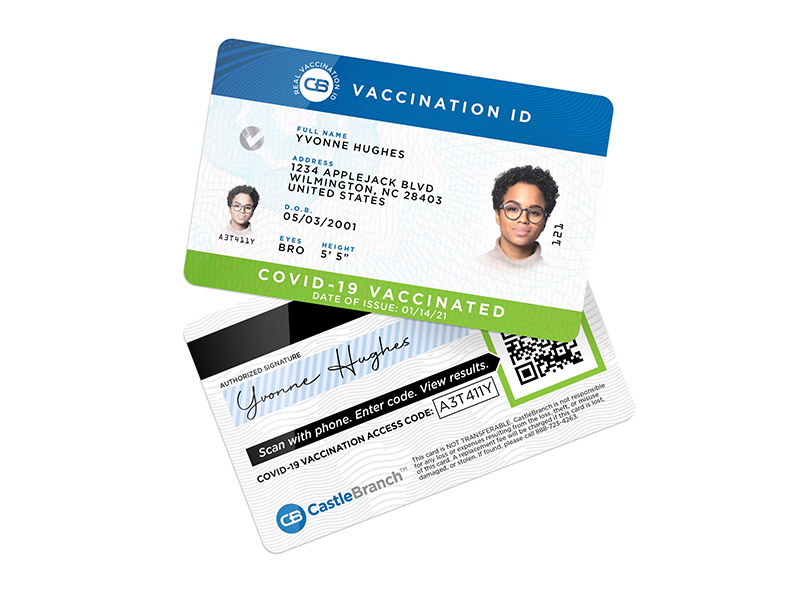 The digital pass, which provides proof of vaccination to third parties, allows someone to enter a business, school, concert, sporting event or other site that may require such certification.

CastleBranch’s “passport” is one of a growing number of pandemic- driven certification cards entering the marketplace. They are expected to become more commonplace as government, health care and business leaders pursue new ways to boost the number of individuals getting vaccinated while reigniting the economy and returning society to more normal conditions.

Officials at CastleBranch and its competitors have high hopes for the digital cards, which federal and state officials stress are not compulsory.

But with the passports still in infancy – CastleBranch launched its on Jan. 14 – it remains to be seen how many businesses and individuals will use them.

A number of vaccine verification apps have been developed since CastleBranch’s version, but pushback over privacy concerns and government agencies overstepping authority have slowed a more rapid adoption. Still, organizations ranging from universities to employers have started discussing their use. European officials in late April began announcing that they would start easing travel restrictions on Americans, a plan based on coming up with systems for verifying proof of vaccinations.

Nearly a third of North Carolinians are fully vaccinated, according to the state’s COVID-19 dashboard, qualifying them for a passport.

At CastleBranch, interested individuals typically begin the process using a scanned version of the signed paper card they received at the vaccination site, which the company says, “can be easily forged, destroyed or lost.”

The firm’s employees then get to work confirming the vaccine manufacturer, the dates doses were administered and verifying the user’s identity “consistent with state and federal privacy laws,” a company overview states.

The card contains tools such as microtext and holographic film to deter fraud as well as “physical identifiers” such as the cardholder’s height, with CastleBranch promising that private data “will never be shared or collected in a database and distributed to third parties” by the company.

The passport is the size of a driver’s license and is paired with a unique access code that, when the cardholder grants permission, can electronically verify the individual’s identity, vaccination status, and be used to view validated primary- source vaccine documents. The cost of the passport is $19.95.

Competition in the vaccine-verification space is growing. Companies including Microsoft and Salesforce are taking a joint approach to encrypting vaccination records and are coordinating their efforts with the U.S. Department of Health and Human Services. For its part, Walmart will provide customers with digital access to personal health data “beginning with” proof of vaccination if done at its pharmacies.

In New York, state officials working with IBM have launched the Excelsior Pass in a pilot program that confirms vaccinations and negative test results.

Mandy Cohen, secretary of North Carolina’s Department of Health and Human Services, said at a recent news conference that she is lining up vendors to do something similar.

“We just want to be able to make sure that people can access their own information about that vaccine for whatever purpose they may need,” she said.

As passports proliferate, their pros and cons are under scrutiny.

In North Carolina, where employers can legally require employees to be vaccinated with only a couple of exceptions, management seems largely content to simply encourage employees to get inoculated, according to Catapult, a statewide human resources consultancy.

That’s the approach being taken at Acme Smoked Fish. Neither the 295 employees at its processing plant in Pender County nor workers at its Brooklyn, New York, headquarters are required to show proof of vaccination, said Adam Caslow, the company’s co-CEO.

While Acme is “strongly recommending” that employees get vaccinated and is informally tracking its “internal immunity,” the company’s position on vaccination passports is “we don’t have an opinion,” Caslow said.

Recommended safety protocols have “worked for us tremendously,” he added.

Requiring customers and employees to show proof of vaccination is also off the menu at LM Restaurants, the parent firm of Bluewater Waterfront Grill, Carolina Ale House, Hops Supply Company and Oceanic.

“We are not requiring vaccination for our employees … it is not a condition of employment. The same philosophy will extend to our guests,” said Katherine Goldfaden, senior director of brands. “Masks, frequent cleaning and social distancing has proven to work in restaurants making them a safe place for team members and guests alike.”

“It has been a challenging 12-14 months for the restaurant industry, and the last thing we want to deal with right now is another policy that divides the public,” Watkins said. “If you’re comfortable eating inside, we will gladly welcome you; if you aren’t, we have ample outdoor seating and curbside pickup as an option.”

At Wilmington International Airport, director Julie Wilsey said it would be up to Washington to make the first move.

“Until the TSA [Transportation Security Administration] recognizes the vaccine passport, we continue to rely on wearing masks and social distancing,” she said.

Of special interest to concertgoers is whether Live Nation will require proof of vaccination for ticketholders entering Wilmington’s North Waterfront Park (just renamed Riverfront Park), the public-private entertainment complex that Live Nation will manage that is scheduled to be completed this summer.

Live Nation will discuss with local officials how the health and safety of performing artists and fans should be addressed as the grand opening draws closer.

The arrival of vaccination passports has also raised some equity issues, including possible lack of access to certain business services and events that members of minority and low-income communities might confront due to a lag in vaccinations, the cost of smartphones or both.

As those issues get debated, individuals who are disinclined to adopt digital proof of vaccination might consider laminating the paper card they receive.

Lamination is free at Office Depot and Staples. At present, though, it is unclear whether confirmation of any booster shots that may be required would be added to the original signed card or a supplementary one.

Caslow, co-CEO of Acme Smoked Fish, has staked out a middle ground of proof.

“I’m going to a Mets game tonight,” he said recently. “I’ve got a picture of my [hard] card on my phone, I’ve got my ID and I will show them my ID matched with my card and I think that will be good enough,” Caslow said.

High-tech or paper, he said, “Just go ahead and get vaccinated.”