By Vicky Janowski, posted Jun 30, 2020
Tweet
As the advisory group evaluating NHRMC’s future prepares to vote this week on their top pick for a potential buyer, a number of people still opposed to selling the county-owned hospital voiced their concerns this week.

The Save Our Hospital grassroots group and State Employees Association of North Carolina hosted a virtual town hall discussion about the hospital Monday evening. The meeting, which lasted for more than three hours, drew about 60 participants online and included questions about potential impacts on cost and patient care as well as other issues.

“We have high access, profitability and low cost and … a monopoly,” he said about NHRMC’s current situation. “We have a successful model that we have here, and for 53 years, we have not cost the taxpayer or asked them for any portion that. So even though I know there seems to be a kind of a growing mood … by some sections of our community that would pay more, I’m not quite there yet.

“I think that there are other ways and other opportunities so that it does not become a long-term financial burden on us,” he added. “You’ve got a good business model.”

Zapple is one of five county commissioners who would vote on a deal, if one is negotiated. The hospital trustees also would have to sign off on a sale.

The PAG is slated to vote at its meeting Thursday evening on its recommendation for the frontrunner. If the county commissioners and hospital trustees agree, negotiations would continue with that health system in the coming months.

As part of that vote Thursday, PAG members are expected to weigh in officially on where stand with two other options – keeping things as they are now for NHRMC or restructuring internally but without an outside system. The group, however, recently issued a letter explaining why they think selling is the best option for the hospital and community.

Several people participating in Monday’s discussion questioned the timing of the process, especially because of the disruptions caused by the coronavirus pandemic.

“To go on with this process because you had a deliverable kind of show us that you’re not being cognizant of the big picture and is the reason why we are so distrustful of this process,” Kyle Horton, a physician who is running for the board of commissioners this year, said to PAG co-chair Spence Broadhurst, who also was on Monday’s talk and responded to questions and comments. “We can never lose sight that this is a life-and-death issue for people.”

Broadhurst said that while he agreed the COVID-19 situation impacted the recent public hearing, he pointed out that the advisory group has been taking input and comments since they first began meeting in October, incorporating those into its work as members went through the process.

“The exploration effort was announced almost a year ago (July 23),” Carolyn Fisher, director of marketing for NHRMC, said in an email Tuesday. “It will be another 2-3 months before it goes to the county commissioners for a final vote, which would be a year since the commissioners approved moving forward with the exploration. Repeated claims that this process has been rushed are simply false.”

Gene Merritt, president of Save Our Hospital, pointed to a recent poll the group commissioned that showed 70% of respondents stating they were against selling the hospital and 73% believing that prices will increase.

Fisher said that the three health systems have shown how they have been able to reduce care costs and raise quality of care for the patients they manage through their ACOs, or accountable care organizations.

“NHRMC has been able to do this, too, but on a much smaller scale,” she said, “because we don’t have the infrastructure to grow these efforts. With a partner, we do more to lower costs than we could do on our own.”

The next PAG meeting was originally scheduled for July 7 but will now take place Thursday at 5:30 p.m. at New Hanover County’s Government Center, 30 Government Center Drive, in the Andre Mallete Training Room.
The public can attend, but capacity will be limited to allow for social distancing. The meeting also will be streamed live on NHCTV.com and on NHCTV’s cable stations: Spectrum Channel 13 and Charter Channel 5.
According to the PAG’s meeting schedule (Thursday is meeting #16 in the chart below), the group is slated to vote on its recommendation for maintaining status quo for NHRMC, restructuring or its first choice of an outside partner. 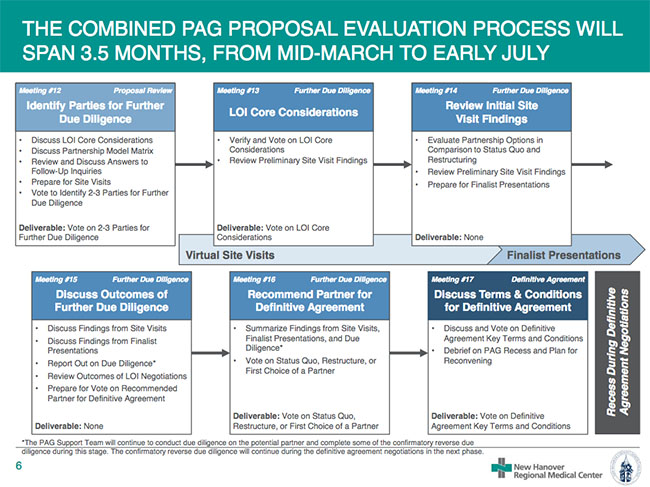