By Vicky Janowski, posted Jun 18, 2020
Tweet
Signing a deal with an outside health system for New Hanover Regional Medical Center now appears to be the preference for an advisory group formed to evaluate the county-owned hospital’s future.

Compared to what several health systems have offered for NHRMC, continuing to go it alone doesn’t stack up, members of the Partnership Advisory Group said Thursday at their meeting, held at University of North Carolina Wilmington’s Burney Center and streamed online.

Control at the local level is the only area among 18 identified issues in which maintaining the status quo or restructuring internally – plans referred to as SystemCo – outweighs going with outside health system proposals, according to the 21-member Partnership Advisory Group (PAG).

Other issues, such as avoiding staff shortages, addressing financial gaps and providing highly specialized services, broke in favor of an outside partnership, according to the PAG's analysis.

“In this process, you know, I’ll be completely honest I did not enter into it open-minded. I was very probably stuck in a position where ‘Everything is going pretty good, but I will listen,’ And things are going great, and New Hanover [Regional] does an outstanding job,” PAG member Cedric Dickerson said. “I think the word that keeps coming up is opportunity … The one thing that popped out to me in this process and word that has come up a lot is health equity.”

NHRMC developed and approved its strategic plan in 2017. The following year hospital trustees started vetting what’s called SystemCo, a plan for how New Hanover Regional Medical Center could restructure to address what hospital leaders describe as its limitations as a county-owned facility. An example of restructuring would be creating a hospital authority, which would move liability off the county if the now-profitable hospital struggled in the future or give it the flexibility to use bond financing tools for construction outside of county lines.

PAG members are currently talking with three health systems – Novant Health, Duke Health and Atrium Health – that have now all offered to buy NHRMC, though they have also said they are open to other models as well. (Those talks as well as the overall discussion about New Hanover Regional’s future ownership questions were the focus of the Greater Wilmington Business Journal’s Power Breakfast event earlier on Thursday. Click here for that coverage.)

For their discussion Thursday evening, PAG members talked about comparing the status quo scenario and restructuring with a partnership. They did not separate out how the three different partnership proposals fared on that scoring – that info hasn’t been released because of the negotiations – but lumped those together as a range under one category.

Here is the PAG’s comparison chart of those 18 areas and how they compare. 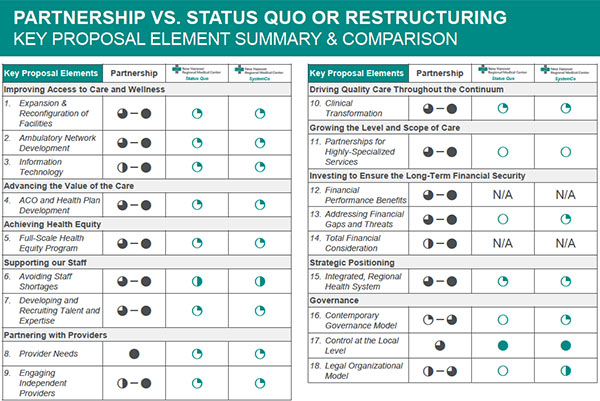 A number of advisory board members spoke in favor of the idea of pursuing the outside proposals over staying standalone, with several like Dickerson explaining their shift from initial skepticism to support of entering into an agreement with one of the bidding parties.

No members Thursday evening spoke up in favor of continuing to consider the status quo and SystemCo scenarios. PAG member David Williams, who also is an NHRMC trustee and Pender County commissioner, even moved to take a vote to formally take those off the table because of the level of agreement – a move that ultimately did not move forward.

New Hanover County Manager Chris Coudriet cautioned against taking a vote so soon on it, and PAG co-chair Spence Broadhurst pointed to the group’s charter, which calls for next bringing a single recommendation on how to proceed to county commissioners and hospital trustees (who have the final vote on any deal), and said it could be addressed then.

PAG leaders have said they could be ready for their next recommendation in mid-July.

“All the respondents gave us almost everything we want, and this is the only area where status quo and SystemCo, when it’s just 100% local control, [rates higher],” Jason Thompson, a member of the PAG and NHRMC Board of Trustees, said at Thursday’s meeting. “If we look at all the other [18 issues], under financial performance, status quo and SystemCo don’t even rate in some and get a 25% of what we want in another. All of the respondents get to the 100% mark through some combination of the things they offer.

“When we look at governance, all the respondents get us 75% of what we want because obviously, they retain some control, so we don’t have 100%, local autonomy like we do today,” Thompson continued. “But all the benefits … justify giving 25% of some control up to get all of those other things.”