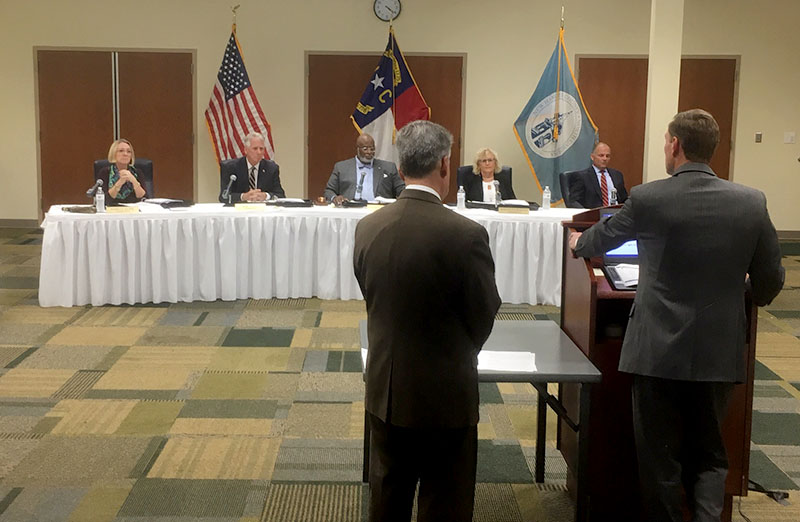 “I’m a proponent of studying all the options, and I have not made a decision about whether this hospital should be sold or not. I don’t have enough information to make that happen,” Kusek said. “It’s about increasing the level of health care in our community regardless of who owns that hospital.

“If we don’t learn now what other entities might provide for our community we might wish we had done so 10 years down the road,” she said at the meeting, which was standing-room only at the government center and included a mix of residents holding signs calling for a vote delay as well as representatives from area business groups. A rally against the vote took place before the meeting at the county building.

Approval of the resolution, required by state law, means a request for proposals can now be crafted for outside health care systems to make their offers to buy or manage NHRMC, which is county owned.

Commissioner Rob Zapple offered an amendment that would have set a one-year minimum from now before any final vote on a sale could take place.

“This process is being rushed unnecessarily. It is not transparent, and important stakeholders in this decision are being ignored,” Zapple said, who asked questions about why the issue didn’t come up to the hospital trustees first and why it had to be handled first through an RFP that comes with contractually binding offer quotes instead of a request for information. “Rushing this resolution could very well lock the hospital into a wrong approach.”

The amendment failed, however, with only the additional backing of Barfield, who explained why he did not support the overall measure to kick-start the RFP process.

“What I’ve heard resounding in this community is this is not the time to move this forward,” said Barfield, who has remained publicly quiet on his position since the proposal was first announced.

County Manager Chris Coudriet and NHRMC President and CEO John Gizdic in late July announced that the county-owned health care system would be looking at exploring a new ownership model.

At that announcement, and at public forums held since then, they have emphasized that Monday’s vote does not commit the county to sell but seeing what offers would be made for NHRMC, the third-largest county-owned hospital remaining in the U.S.

“It is our recommendation that you proceed in a very deliberate, fact-based manner that complies with the state statute and ensures additional valuable input,” Coudriet said to commissioners before they voted.

"The approved resolution and direction of the board begins a research phase to understand what options exist for NHRMC, including a potential sale, other partnerships, and an evaluation of options for NHRMC to remain county owned," a news released sent out after the vote stated. "The resolution does not direct or confirm a sale of NHRMC."

The resolution also authorized forming a Partnership Advisory Group to help develop priorities for the RFP, evaluate the proposals received and provide a recommendation on next steps to the county commissioners and hospital trustees.

"The group would include county, hospital physician, nonprofit and community leaders, and it would be reflective of the communities, diverse individuals and interests," Coudriet said, adding that it will meet at least twice before an RFP goes out.