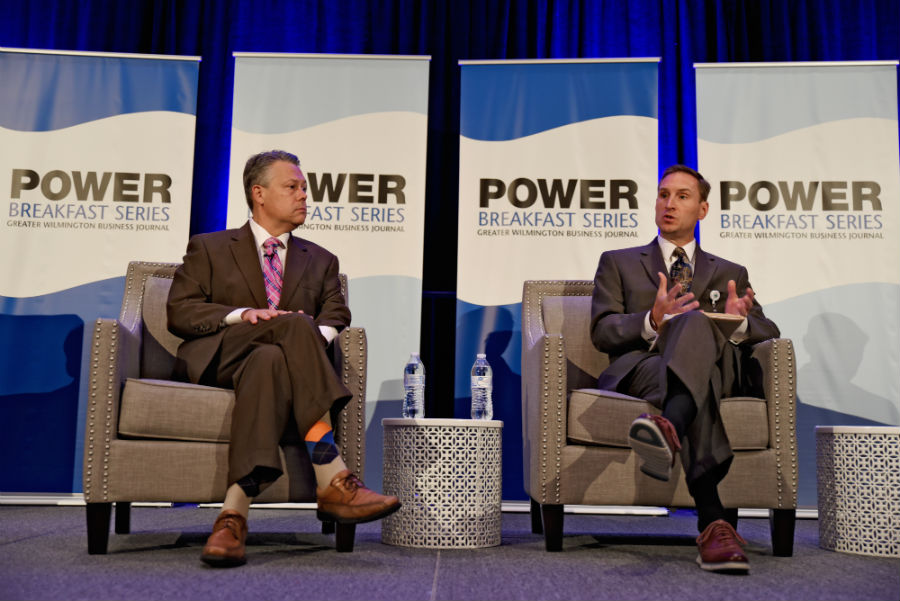 Who might run or own New Hanover Regional Medical Center in the future remains to be seen, but if a Sept. 3 vote on exploring a potential sale of the hospital moves forward, more community input will be part of the process, officials said Monday.

But why does the issue of a possible sale or changing the ownership structure in some way of county-owned NHRMC have to be considered Sept. 3? A question about the date, which is when the issue is on the New  Hanover County Board of Commissioners agenda, was posed Monday during the Greater Wilmington Business Journal Power Breakfast titled, "A Healthy Sale?"

“I want to start off by acknowledging: Putting the question before the board has opened up a lot of passion, a lot of emotion. It’s added to uncertainty in an industry that already faces lots of uncertainty, and that’s unfortunate,” responded New Hanover County Manager Chris Coudriet. “But I think it is absolutely necessary if we want to take the long-term view for the hospital. And can we have a hospital, to be perfectly honest, that doesn’t carry local tax subsidy?”

Coudriet and John Gizdic, president and CEO of NHRMC, fielded the questions before more than 500 businesspeople and local leaders during the Power Breakfast, held at the Wilmington Convention Center. A video of the event is available on TV station WECT's website.

Earlier this month, members of NHRMC’s Medical Staff asked New Hanover County commissioners to hold off on the Sept. 3 vote.

About the date, Coudriet added Monday, “We wanted to put it on an agenda whereby we gave plenty of opportunity for the community to hear and understand what the question is. There was nothing magical about September the third. There was no triggering event in the course of the hospital.”

He said it became a topic through normal conversations between himself and Gizdic and other area officials. After discussions that included those officials, “John and I came to the point this summer that if the hospital is at its very best that it’s ever been and we want to explore a potentially different kind of ownership model in the future, we need to move that ball forward,” Coudriet said.

Three of the five New Hanover County Commissioners have said they support exploring a possible sale, but the vote does not automatically mean the hospital is for sale; instead, it clears the way for the creation of a request for proposals (RFP) that would be issued to seek information from interested entities and lead to more public hearings.

If the board approves the resolution, Coudriet said, “the first thing that John and I would do, and it's called for in the resolution, is work together, work with the community to establish a partnership advisory group that's going to be made up of health care professionals, of folks from the hospital, folks from the county, community and business leaders. The intention of that advisory group is to actually begin the process of putting the request for proposals together that addresses what we need, want and expect and the protections that would be necessary for the foreseeable future in health care.”

Referring to the advisory committee, Frank Williams, chairman of the Brunswick County Board of Commissioners, asked Monday: “Yes-or-no question: Will Brunswick County have a seat on that commission?”

Coudriet responded, “John and I will talk about that and evaluate whether or not that is the right thing to do with the advisory group or is there another model for us to seek and receive that regional comment.”

The county manager said he does not know how many members the advisory committee would hold.

Gizdic said he wanted to emphasize that selling is not the only option, although “resolution of intent to sell” is the required state statute language.

“That does not mean that is the only option,” Gizdic said, “and so exploring different structures going forward is what we're talking about. One of which could include a sale, but there are many, many other types of structures and models that could be proposed and that we would want to understand as part of that process. And that is the point about getting information and options so we know what they might be.”

Gizdic and Coudriet have said the hospital is expected to need an enormous amount of money in the future to add needed services. City Councilman Paul Lawler asked Gizdic and Coudriet on Monday about where those services might end up being located.

“What assurance do we have that an owner from Charlotte or Chapel Hill or Durham would choose to add services here, whatever the next service would be, than rather than making us a feeder to the mother ship, wherever that happened to be?” Lawler asked.

Gizdic responded, “First of all, I don’t think that would be acceptable to our medical community. It's more than just the hospital. When you look at the physicians and the providers in our region, they want to make sure they have access and the ability to care for patients locally,”

Additionally, he said, because of the demand for health care in the growing Cape Fear region, “it makes business sense to place them here,” Gizdic said.

If the resolution is approved, the public will have more chances to provide input through future public hearings, and advisory board meetings will be subject to open meeting laws, Coudriet said.

A couple of county forums have already been held on the subject. The New Hanover County Democratic Party is hosting a forum on the issue at 6 p.m. Wednesday at 1305 S. Fifth Ave. in Wilmington.

The Sept. 3 New Hanover County Board of Commissioners meeting starts at 4 p.m.