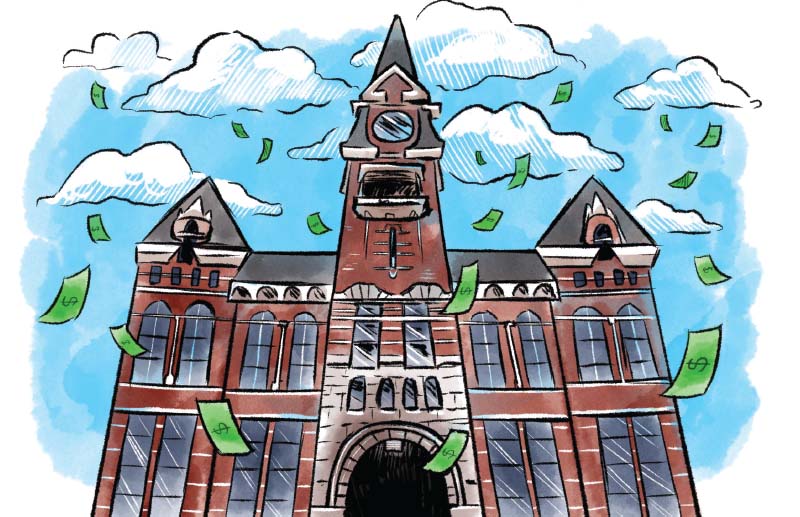 If the county were to sell New Hanover Regional Medical Center to a larger health system, potentially hundreds of millions of dollars could go to New Hanover County’s coffers. Illustration by Victor Morris
If New Hanover County commissioners decide in September to explore putting the county-owned hospital up for sale, the decision could not only impact the future of health care in the Cape Fear region, but could potentially result in lottery-like winnings that might change the county for generations.

On July 23, county administrators and New Hanover County Regional Medical Center officials announced their desire to solicit bids from potential buyers. At the Sept. 3 county commissioners meeting, members are expected to vote on a “Resolution of Intent to Sell” that would clear the way to put the not-for-profit system that is the region’s largest employer on the market to see who’s interested through a formal request for proposals.

If the process did point to a selloff of the county’s most-valuable asset, officials said that picking a new owner and executing an agreement could take more than a year.

But even if the resolution passes it doesn’t mean an immediate sale.

Instead, it is a signal the county is willing to hear offers, and those offers could be “in the hundreds of millions of dollars, potentially up to a billion-dollar range,” according to John Gizdic, the hospital’s president and CEO.

The high price stems from a hospital that has strong financials. Last year, NHRMC’s operating revenue surpassed $1.1 billion and is forecast for more than $1.2 billion this fiscal year, which runs through the end of September. Those figures include its physician group and accountable care organization. And in the tri-county area, NHRMC holds 78.7% of the market share for inpatient care.

As a county-owned facility, sale proceeds would mean a major windfall to New Hanover County – potentially more than double what the county spends on its annual budget, which is $399 million this fiscal year.

“If the county did choose to sell the hospital, those dollars would afford the county the ability to strategically invest a significant amount of money back into the community it serves,” New Hanover County Manager Chris Coudriet said at a news conference.

New Hanover County is facing pressure to upgrade schools, solve the affordable housing crisis and address the opioid epidemic from an electorate resistant to raising taxes – meaning, in theory, funds from a sale could go to improving public schools, workforce development programs, health equity and small business and entrepreneurship.

That fact isn’t lost on the county commissioners backing the proposal.

“Now we have commissioners who are forward-thinking enough, and as well as the hospital board, that we’re able to work together to do what’s best for the community,” Commissioner Julia Olson-Boseman said.

At first glance, it appears the Sept. 3 resolution will pass the five-member board as commissioners Olson-Boseman, Pat Kusek and Woody White all said publicly they support the move.

Chairman Jonathan Barfield Jr., the lone supporter of a 2011 plan to enter a management – not ownership – agreement with Carolinas Health- Care System, said he wants to hear public opinion on the move though he has concerns, and Commissioner Rob Zapple said the money is just a short-term gain.

“Having a strong health care system in New Hanover County is really at the top of my list,” Zapple said.

“For me, there are two values of the hospital. There’s a dollar value, and there’s a value to the community,” Barfield said. “For me, I don’t have enough information to say I’m voting for anything until I hear from the third leg of the stool, which would be community input.

“The question is what is the most important value.”

Much has changed in the landscape since the 2011 management offer from Charlotte-based Carolinas HealthCare System (now called Atrium Health) failed to garner support from then-county commissions because of concerns over losing local control.

Uncertainty in the health care industry has driven counties to sell their hospitals, and merger and acquisition activity has spiked.

The pending resolution to explore a sell follows a trend across the state and country as local governments are selling public buildings to make up for budget shortfalls or to generate funds to reinvest in infrastructure.

Arizona completed a plan in January to regain ownership of several public properties, including the state’s House and Senate buildings and the state’s Supreme Court. Those buildings along with others were sold in a sale-leaseback deal during a fiscal crisis in 2010 for about $1 billion. The state government used the funds, however, to address a $3 billion shortfall.

Indiana in 2006 chose to lease a 157-mile toll road to a private entity for $3.8 billion for 75 years to fund major transportation projects. Last year, the state announced another one-time payment of $1 billion by letting the operator increase toll costs for commercial trucks, with the funds going toward highway improvements as well as $100 million to bring highspeed internet to underserved areas.

In North Carolina, Nashville- based for-profit HCA Healthcare closed on a $1.5 billion purchase of Mission Health in Asheville earlier this year. Mission Health was a not for- profit but not a county-owned system. Sale proceeds, along with what Mission Health still had in cash and investments, went to a health trust to address public health and social determinants of health in that region.

For example, the trust will give $25 million over five years to address substance abuse in the area.

And while the local governments around Mission Health did not directly receive a large check from the sale, they are expecting a major bump in their annual budgets as the Mission Health facilities switch from a not-for-profit owner that was exempt from local property taxes.

Buncombe County officials estimate new tax revenue of more than $3.4 million this fiscal year and nearly $5.9 million next year, according to the Asheville Citizen-Times. Asheville officials expect to get $2.5 million this year and $5 million after that from taxes on Mission’s properties, which are scattered throughout the area but anchored by an 815-bed hospital in Asheville.

Officials there said they would use the money to bolster the county’s Early Childhood Education and Development Fund, stave off a tax increase for the city and potentially address issues from transportation to affordable housing, elected leaders told the Asheville newspaper.

“Every county hospital I know is considering some sort of sale or affiliation with a larger hospital system,” said Emerson Smith, a medical sociologist and president of the Metromark HealthCare Research Center in Columbia, South Carolina. “Under the current administration, we don’t know what is coming out. Not having any knowledge what the Trump Administration will do with health care will make counties think it is time to get out of the business.”

There are 6,210 hospitals in the U.S., according to the American Hospital Association.

NHRMC is the third-largest county- owned hospital in the country, Gizdic said based on their research of the national market. He said that the two larger ones – Jackson Health System in Miami and The Metro- Health System in Cleveland – receive local tax subsidies.

Though NHRMC does not pay property taxes, New Hanover County does not send tax money the hospital’s way for operations.

“It’s not just the proceeds,” Olson- Boseman said about the potential for a sale. “It’s the future of health care and what we can do for these equity drivers in our community – the food deserts, all of education and investing in the inner-city schools, giving the sheriff the money they need to stop the drugs that are in our county lines.”

Besides funding infrastructure projects, both White and Olson-Boseman said the profits could reduce the county’s debt service – which takes up 16 percent of the county’s 2018 budget and improve New Hanover’s debt service. It could also improve the county’s bond rating, meaning lower interest rates.

“Don’t just throw it into the county,” Smith said. “Use the money to build a preventive system. That is where you save money overall.”

Kusek said one idea would be to sock the proceeds away so they continue to pay off for the county for years.

“I would hope that if we move forward and get further on down the road – of course making the assumption that [selling the hospital] is the will of the whole board – that we very quickly put together some thoughts about looking at perhaps doing an endowment with the principle of this and putting some conditions on it and hiring a team of very good financial managers to advise us,” she said.

“That money should grow every year,” Kusek said. “We shouldn’t just be scooping every bit of the interest that it generates.

“In 100 years or 200 years I want somebody to look back and say, ‘Man, those county commissioners did a good job with this.’ That’d be my hope.”