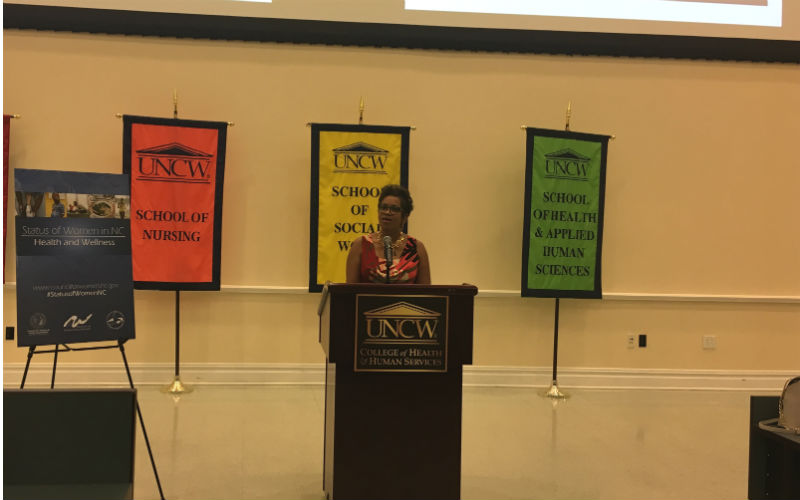 N.C. Department of Administration Secretary Machelle Sanders spoke at the launch event for a report on the status of women's health in the state. (Photo by Johanna Cano)
Closing the insurance coverage gap, increasing women’s economic security and increasing medical investments in rural areas are some steps that can be taken to improve the health and wellness of North Carolina women.

That was one central message at Wednesday’s launch event in Wilmington for “Status of Women in NC: Health and Wellness Report” hosted by the North Carolina Council for Women and Youth Involvement and the YWCA Lower Cape Fear.

The report, completed by the Institute for Women’s Policy Research (IWPR), analyzes data on women’s health including chronic disease, physical health and sexual health, among other indicators.

“While this report is called the 'Status of Women,' we know that improving the health and wellness of women in our state is not just a women's issue, but rather an issue that is creating healthier families and communities, contributing to a stronger and healthier workforce and helping to grow the state's economy,” said Machelle Sanders, N.C. Department of Administration secretary.

The report found that the health of women in the state has improved in some areas since a previous 2013 report, but in other areas, it has remained the same or worsened, particularly in rural counties, Sanders said.

“North Carolina ranked pretty much in the middle or at the bottom nationally on these indicators of health and well-being,” said Elyse Shaw, study director with IWPR.

The state ranked the worst when it comes to AIDS diagnosis; also, women in the state are diagnosed with gonorrhea and chlamydia at a higher rate than the national rate.

The diabetes mortality rate for women in North Carolina is slightly higher than the national rate, according to the report.

New Hanover County ranked high -- in the top third among counties in the state -- for mortality rates, including heart disease, diabetes and breast cancer.

However, the county did not rank well for stroke mortality, where it ranked 80 out of 100 counties.

The county also ranks low in the state for reported rates of gonorrhea and chlamydia, which is a trend happening throughout the country, Shaw said.

“Black women in North Carolina have the highest mortality rates for heart disease and stroke,” Shaw said. “Native American women also tend to fare poorly when it comes to these indicators.”

The report includes policy recommendations that can be localized to help improve the health of women in the state.

Those policies include closing the insurance coverage gap, increasing funding for those who have experienced interpersonal violence and sexual assault and, because rural counties had the worst women’s health rankings in the state, increasing medical investments in rural areas.

Closing the insurance coverage gap, which would provide coverage for women who make too much for Medicaid but too little too afford private health insurance, is an item Gov. Roy Cooper has recommended in the state’s budget, Sanders said.

The recommendation in the state’s budget, if approved, would involve expanding Medicaid in the state and would bring billions to North Carolina’s economy, Sanders said.

According to research by two NC-based foundations, Kate B. Reynolds Charitable Trust and Cone Health Foundation, North Carolina would experience $11.7 billion in increased business activity and add 37,000 jobs if Medicaid is expanded. The research found that Medicaid expansion would ensure 365,000 more people and provide economic benefits in every county.

The report stated that increasing women’s economic security, such as raising the minimum wage, enacting paid family and medical leave, and investing in young people, such as raising funding for schools, are some ways to help better the health and wellness of women.

Cooper is recommending $40 million for school nurses, counselors, psychologists, social workers and school resource officers which also will help in the fight for health care for all, Sanders said.

“There are multiple ways to help improve the status of women’s wellness in North Carolina,” Sanders said. “Supporting efforts to close the insurance gap, increasing health and medical investments in rural areas, supporting efforts that will increase women’s economic security…all lead to healthier women and families, a stronger workforce and thriving economy.”