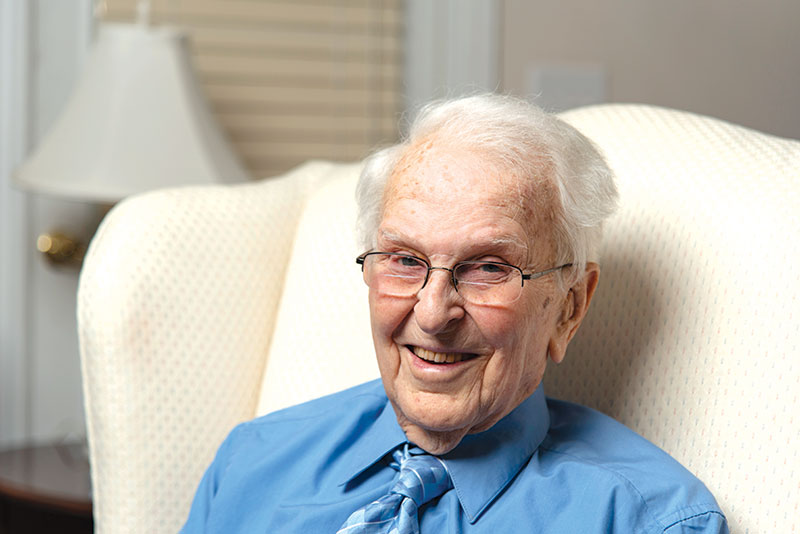 A heart for medicine: Robert “Bob” Andrews, 97, practiced medicine for more than half a century and developed the cardiology department at Cape Fear Hospital. (photo by Michael Cline Spencer)
Ninety-seven-year-old retired doctor Robert “Bob” Andrews sat next to his wife, home health care provider and his daughter as I looked around their home, seeing medical-themed ceramic figurines and several pictures of a smiling family. Andrews, who stopped practicing 15 years ago at an impressive age 82, is one of two winners of the 2018 Health Care Heroes Lifetime Achievement awards.

As told by his award nominator, Bonnie Brown of the New Hanover- Pender Medical Society, Andrews loved a good house call. Like I entered his home to learn about his career, Andrews visited his patients at their primary residences to learn about their lifestyle, not just their illness.

While Andrews was being photographed, I asked the family about his greatest achievements, though just the length of his career is an achievement itself. He attended the University of North Carolina at Chapel Hill as an undergraduate and then graduated from the University of Tennessee’s medical school in 1946, meaning he practiced for 57 years.

“I remember him being on-call all the time,” said Kayren Hobbs, his daughter. “He spent time with each patient and never rushed.”

As Brown explained in her nomination, Andrews saw no need to maintain a “professional distance.”

“I tried to make my patients my friends. I figured that they’d be more willing or likely to do what I wanted them to do to get well quicker,” he said with a laugh.

Hobbs remembered being with her father at church, and patients would stop to talk to him after the service.

“He’d answer their questions right then and there,” she said. “Everybody loved and admired him as a friend.”

Despite his long hours at the hospital and his workaholic nature, Andrews always made a point to let go of his work when he finally walked through his front door at the end of the day, Hobbs said.

Brown described the doctor’s parenting philosophy: Play with your children no matter how exhausted you are when you get home.

Of her father, Hobbs is most proud of his development of the Cape Fear Hospital’s cardiology department. He purchased equipment, hired technicians and read all of the EKGs.

“He was really good at diagnosing EKGs and deciphering what was wrong with people’s hearts,” she said. At one point, Hobbs worked as one of her father’s EKG technicians.

Hoping to be closer to his aging parents, in 1958, the family moved back to Wilmington, Andrews’ birthplace, after he had an already impressive career. His interest in caring for others, Brown explained, started at a very young age when he visited his grandmother to administer her heart medication and read the Horatio Alger book series while she crocheted.

After completing medical school, Andrews worked hard to increase his 111 pounds to meet the 126-pound weight minimum for the military and served in the U.S. Navy for two years. He then practiced in Washington, D.C., the UNC Infirmary, and in Roxboro, where he practiced from 1950 to 1958.

He was recruited to Wilmington by the Cape Fear Memorial Hospital, which a group of physicians had opened in 1957 on Wrightsville Avenue (the site of what is now New Hanover Regional Medical Center Orthopedic Hospital).

“Dr. Mebane and Dr. Sinclair took me out for a seafood dinner on the Wrightsville sound,” Andrews said, referring to two of the founding doctors, “and I agreed to work with them.”

During his start at Cape Fear, among regular duties, Andrews also worked in obstetrics, delivering around 300 babies, who the hospital lovingly called “Andrews’ angels.”

After about three years of working long, difficult hours, going above and beyond, Andrews’ colleague, Bill Mebane, recognized the need for a change.

“Bill fell into my office, and he said, ‘You will not last long doing all this,’” Andrews said. “He said you have to give up something.”

And so Andrews made his most important delivery of all, the cardiology department, where he worked until the 1990s.

One might think that the facility change would seem like an obvious opportunity for Andrews to retire, but as you might expect, he kept going, leaving the cardiology department but choosing to serve as a general practitioner at New Hanover Hospital.

“I liked all phases of medicine so that’s why I chose general practitioning again,” he said.

The award nominator also added that, if it appeared that paying for care would be a hardship, he adjusted his fee for patients accordingly.

“His practice was always about the patient,” Brown said.

In addition to his admired work as a physician, Andrews served as Medical Society President in 1974 and was active in Kiwanis International, the AMA, AAFP and the Executive Club. A member of the Temple Baptist Church since the age of two months, he was also a longtime Sunday school teacher, deacon and now deacon emeritus.

Even now, at 97, when he’s being cared for by his own home health specialist, Andrews talks about his patients with a twinkle in his eyes.

When I finally asked the award winner himself what he believed to be his greatest achievement, I wasn’t surprised by his answer.

“I really think house calls was one of my greatest contributions to medicine,” he said.