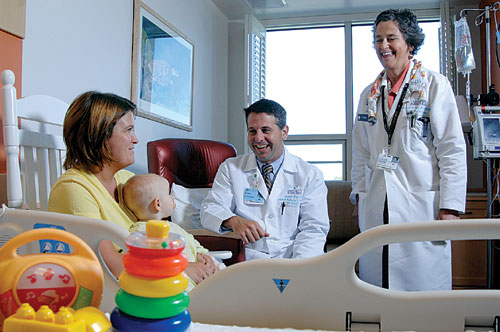 Joseph Pino has made a career of more than just treating patients. He’s intensely interested in improving the systems that provide care for those individuals.

Pino chose to become board certified in two areas of specialization because of that interest.

“I chose the dual track of internal medicine and pediatrics, not to be schizophrenic but because I would be able to develop a greater breadth and depth of knowledge in each,” he said.

Since he came to Wilmington in July 2001 to take the position of teaching physician at New Hanover Regional Medical Center, Pino said he has focused his efforts on three interrelated endeavors: providing direct patient care; supervising residents at the medical center with a goal of helping them become successful independent physicians; and improving the health care and health systems for people in the region.

To help him achieve his goals, Pino subsequently earned a master’s degree in health care administration from University of North Carolina at Chapel Hill’s School of Public Health and became chief of staff at NHRMC.

In that capacity he worked with medical staff there on a project that focused on how to improve outcomes for patients. The plan, Pino said, positioned the medical center for changes in the way that health care organizations will be reimbursed under the Affordable Care Act, with reimbursement based on patient outcomes rather than numbers of patients treated.

“Wonderful projects came out of this,” Pino said. “For example, five years ago, as the [Betty H. Cameron] Women’s and Children’s Hospital was nearing completion, we made a proposal for 24/7 care for children requiring hospitalization with the support of community physicians and pediatricians.”

Since then, Pino’s professional focus, in addition to his pediatric practice, has been on the training of residents. As vice president of graduate medical education at NHRMC, he oversees all four of the hospital’s residency programs: internal medicine, general surgery, obstetrics and gynecology and family medicine.

Those programs operate through the hospital’s affiliations with the UNC School of Medicine and, locally, with the South East Area Health Education Center (SEAHEC), a nonprofit organization that provides training, education and resources to area health care professionals.

For many physicians, administering those resident programs while remaining a busy pediatrician would be more than enough responsibility. But Pino’s commitment to improving the quality of health care led to his accepting an additional role. In December, he became president and CEO of SEAHEC itself.

“I’m busy on many fronts; the only thing constant is change,” he said with a laugh.

Pino doesn’t think of health care education as something that should be limited to professionals in the field.

“I want to make a difference with people, with systems,” he said. “I want to improve health access and health care, partnering with entities such as Legal Aid or MedNorth [Health Center] that have navigators or counselors to help the newly insured. This is a team effort.”