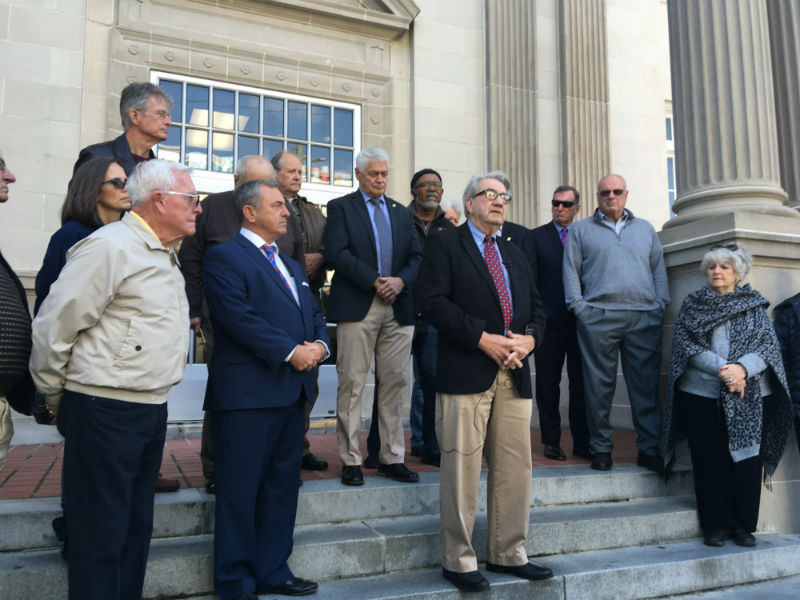 Members of Save Our Hospital, a newly formed nonprofit opposing a sale or partnership for NHRMC, gathered outside the New Hanover County Courthouse on Wednesday to officially announce the formation of the group. (Photo by Johanna Cano)
With the idea of a potential lawsuit on the table, Save Our Hospital Inc., a recently formed nonprofit, is positioning itself against the sale of New Hanover Regional Medical Center.

Gene Merritt, president of the nonprofit made up of Wilmington residents and Sen. Harper Peterson (D-New Hanover), said Wednesday in a press conference that the nonprofit will carry out a public information campaign to educate people in the area about the dangers of selling the hospital. The group is also against the hospital obtaining a partner.

“We believe that NHRMC, a financially viable institution, is fully capable of managing its own future without selling out or obtaining a partner,” Merritt said. “We favor local control of our hospital system. And, we were confident that a large majority of the people of New Hanover County and Southeastern North Carolina feel the same.”

The request was sent through certified mail Nov. 15, which provides verification when the mail is received. Shell said they haven't gotten a notice of its delivery yet.

Jessica Loeper, chief communications officer with New Hanover County, said in an email that the hospital had not received any public information requests.

The incorporation of Save Our Hospital might lay down the groundwork for a potential lawsuit later on if the hospital does change hands, according to Hall.

Peterson also said the group is prepared to take legal action if the request for documents is not fulfilled.

“The public records request is so important and so far, they haven't provided that,” Peterson said. “That's a legal issue. So, if we take a legal attack that is part of our agenda. If we have to, we'll take legal action,”

Shell said that according to studies the possible sale or partnership of the hospital would lead to higher costs and lower quality.

“Hospital consolidation always, without exception, leads to increased cost and those costs are passed along to individuals and to small businesses especially,” Shell said. “They lead to reduced services.”

One key issue with the process is it has been rushed, Merritt said.

Merritt said he believes that members of the advisory group have good intentions but are being used to promote the sale.

“What we ideally would like to see is that the PAG turns into an investigative group that truly analyzes what the alternatives might be,” Merritt said.

New Hanover County Commissioners approved a resolution in September to receive bids from possible buyers or management partners for the county-owned hospital.

The decision to pursue a potential new owner comes after the hospital has experienced growth and invested over $1 billion in facilities; however, NHRMC President and CEO John Gizdic said in a previous story that based on the area's projected population growth, it's uncertain if the health system could handle that growth on its own.

Additionally, the city of Wilmington Council approved a resolution in October urging county commissioners to make no final decision for at least a year to provide time for community discussions.

In response to the formation of Save our Hospital Inc., NHRMC issued a statement Monday afternoon encouraging the community to keep an open mind.

“We urge all members of the community to refrain from a rush to judgment and allow the Partnership Advisory Group to do its work, evaluating all options, considering all facts, and making a recommendation for the NHRMC Board of Trustees, New Hanover County Commissioners, and public to review and thoughtfully consider, with an open mind and a determination to do what is right,” the response stated.

Opposition to the sale or partnership with no knowledge of what it could bring to the region overshadows and minimizes the work being done by the 21-member Partnership Advisory Group, stated the hospital’s response.

The advisory group was formed to help develop priorities, evaluate proposals and examine options for maintaining ownership, as well as provide recommendations on next steps, according to the county.

"Obviously we want input from everybody we can in the community. We are brand new; we are just starting," said Biehner, a former hospital executive who also serves on NHRMC's board of trustees.

Biehner, speaking during a press briefing Wednesday afternoon along with co-chair Broadhurst and PAG member Bill Cameron, said representatives of the advisory group are planning to meet with members of Save Our Hospital on Friday.

"This is such an emotional thing. What’s more important to us and our families than our health care," Broadhurst said. "I disagree personally with some of the things they said. But we’re a community, we’re going to disagree."

One of those areas for Broadhurst, he said, is about comments that the PAG was chosen to usher through a decision that's already been made.

"If you wanted to pick 21 people to rubber-stamp something, you picked the wrong people," Broadhurst said, describing the group as a mix of strong-willed, opinionated members.

The PAG will hold its third meeting Wednesday at the New Hanover County Government Center from 5:30 to 7:30 p.m. The meeting is open to the public but does not include a public comment period.

Peterson said more time should be devoted to such an impactful decision.

“I respect the PAG, but again, there are counterpoints, and I think we need to slow it down and be comprehensive about every option,” Peterson said. “It’s the biggest decision we'll make in our lifetimes. And more importantly, it impacts future generations. County Commission is going to make a paramount decision that is going to impact us for years.”

This updated version includes more information on the public information request the nonprofit has made and a response from the county about the request.