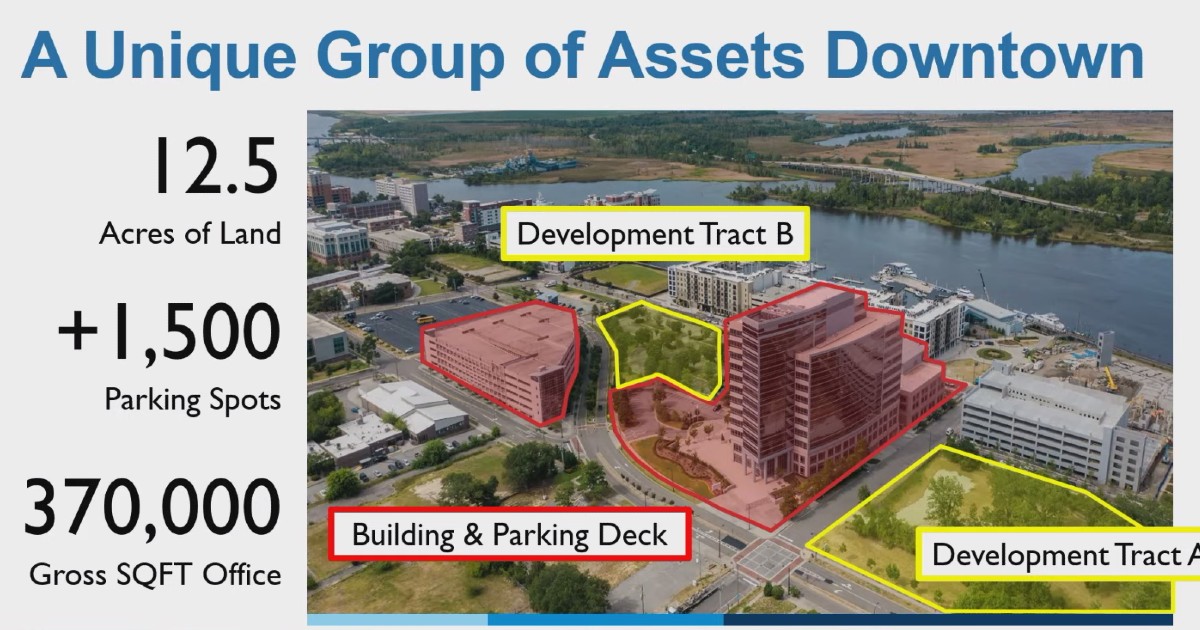 A city of Wilmington staff presentation Monday highlighted the potential benefits if the city buys the Thermo Fisher campus downtown. (City of Wilmington)
Potential tenants have already expressed interest in leasing parts of the 12-story former PPD building should a purchase by the city of Wilmington take place, city officials said Monday.

But they also emphasized to Wilmington City Council members that the potential $68 million transaction with owner Thermo Fisher is far from guaranteed at this point, even if the elected officials agree to move forward with examining the idea.

"[PPD owner] Thermo Fisher has not accepted the terms of the deal ... All we're asking for is an opportunity to explore this much more thoroughly so that we can determine whether or not it is as good an idea as we think it may be," said Tony Caudle, Wilmington city manager, during a presentation to the council at its agenda briefing Monday morning.

City officials say buying the Thermo Fisher campus, which includes the building, adjacent property and more than 1,000 parking spaces in a parking deck, will cost less than the city trying to solve the space problems it has now, an endeavor that an outside expert estimated could cost more than $90 million.

At its regular meeting Tuesday, the council will consider a resolution that would allow the city manager to make the offer to PPD entity River Ventures LLC to buy the Thermo Fisher campus. They will also consider providing $500,000 in refundable earnest money to go with the offer and another $250,000 to fund the offer's 120-day exploration process.

If the city buys the building, up to half of it could be used to consolidate city departments, now spread across multiple aging buildings in downtown Wilmington and beyond. Another portion would be leased back by Thermo Fisher, the global pharmaceutical firm that bought Wilmington-based PPD in 2021, to continue to use as office space. The rest could be leased at market rates to other office users with the money going to the city. The sale of current city office buildings, other than Thalian Hall, could offset the purchase of the Thermo Fisher property, officials said.


Wilmington Mayor Bill Saffo said Friday that city council members seem to agree that they need to pursue the potential Thermo Fisher campus purchase. Council members only asked a couple of questions about the matter at Monday's agenda briefing.

"During that 120-day examination period, does the city anticipate engaging with the public [at large] with regards to the market rate space that will be available to determine the market demand of that space; how much we'll have available; can we put in the public notice so we can get some feedback from potential tenants?" asked Luke Waddell, councilman and principal broker at Wrightville Beach-based Cadence Realty Corp.

Deputy City Manager Chad McEwen replied, "Absolutely. We've actually already received some interest. Obviously interest doesn't pay bills, but we have had phone calls and interest in those residual floors that will be available and we certainly will engage public as well as private entities that may be interested in securing space."


Councilman Charlie Rivenbark, who is also a commercial real estate broker with Wilmington-based commercial real estate firm Cape Fear Commercial, asked whether those talks could result in something in written form, such as a letter of intent to lease the space, to which McEwen also replied, "Absolutely." McEwen added, "One component of this obviously involves Local Government Commission, and one key component for us in terms of our negotiation with Thermo Fisher is prior to any LGC review, having a signed lease for the LGC reflecting Thermo Fisher's leasing of those floors. That will help with the LGC process. Any other subsequent contracts which are related to lease space will also bolster that argument to LGC."

The LGC has been critical of some local government development ideas in recent years, recently swatting down the Project Grace proposal by New Hanover County officials. As it stood then, Project Grace would have involved the redevelopment of a county-owned downtown block into a mixed-use project that would include new facilities for the county library and the Cape Fear Museum, along with commercial and residential space.

In the Thermo Fisher campus case, the LGC would have to sign off on the city of Wilmington borrowing money to buy the property. According to the LGC's website, "In reviewing each proposed borrowing, the LGC examines whether the amount being borrowed is adequate and reasonable for the projects and is an amount the unit can reasonably afford to repay."


City as a prospect

City officials didn't think the city could afford to buy the campus when they first looked at the idea, but representatives of the team selling the property came to them and began engaging in conversations about the possibility, Caudle said.

"We spoke to dozens upon dozens of prospects, and clearly to us one of those potential prospects was the city of Wilmington," Loukas said.

He said they’ve also had interest from Class-A office users interested in leasing space in the building.

"While we've been marketing this, we've had several prospects approach us about leasing space in the building. Some of those prospects have been interested in space for quite some time, but they're larger users, and there just hasn't been availability of their square footage needs," Loukas said. "So this was a good opportunity for them."

Asked about CFC's connection to Councilman Rivenbark, Loukas said Monday that although Rivenbark is a senior vice president at CFC, he has "zero involvement" in the potential transaction between Thermo Fisher and the city.

The Wilmington Chamber of Commerce Board of Directors on Monday announced "strong support for the city of Wilmington’s potential acquisition of Thermo Fisher Scientific’s 12.5-acre campus in northern downtown. The Chamber believes this presents a generational opportunity to positively impact the city’s downtown, creating new opportunities for commerce and economic growth, while meeting the city’s long-term space needs in a financially responsible way."

Chamber officials said the city's ownership of the deck could "alleviate parking challenges for events at Riverfront Park and future development at the north end of downtown. Undeveloped parcels on the campus could also be made available for future economic development opportunities."

The chamber release also announced that the organization will be leading "a visioning process, working with key collaborative partners to implement community charettes and develop an exciting vision for what a redeveloped and reimagined city properties and downtown could become. This promises an array of benefits to the entire community, including dining, retail, entertainment, job creation, housing opportunities for all incomes, and enhancing the community’s tax base."

The chamber wanted to weigh in on the prospect, according to its president, Natalie English, because its board of directors supports the ongoing efforts of the city to address its space needs "in a financially responsible manner. This plan aims to increase the efficiency of our government partners and also preserves potential growth opportunities for businesses who are looking to expand or move to Wilmington in the future."

In an emailed statement Monday, the CEO of the region's lead economic development agency, Wilmington Business Development, responded to a question about WBD's opinion on the potential purchase.

Scott Satterfield stated, "We are supportive of our partners at the city of Wilmington as they further evaluate their operational efficiencies. The opportunities that could develop from this potential purchase leave us in a strong position to work with our various partners to identify viable clients for the properties left behind as well as what will remain in the former PPD building."