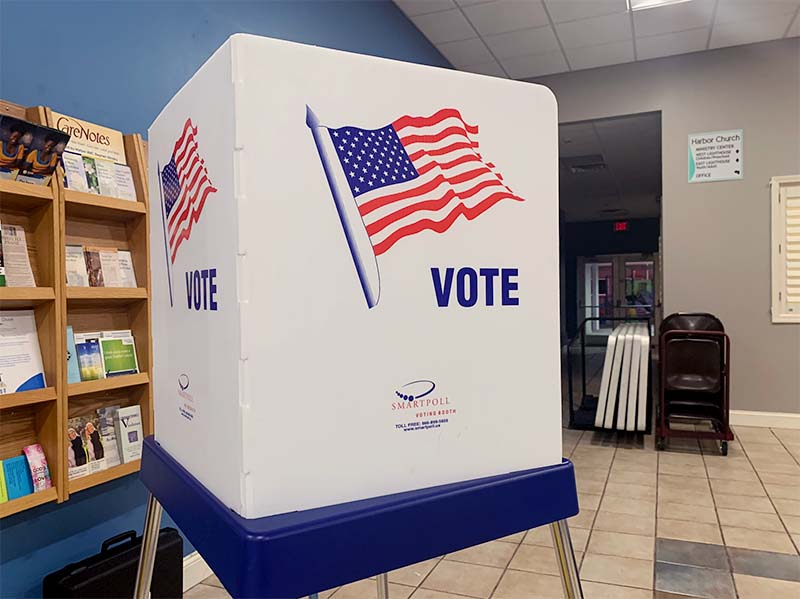 The 2022 midterm election resulted in gains for Republican candidates at the local and state level. (Photo by Johanna F. Still)
Republicans in North Carolina and New Hanover County secured significant victories in this year’s midterm elections.

The political breakdown of the New Hanover County Board of Commissioners will remain the same, favoring Republicans 3-2. Outgoing Chairwoman Julia Olson-Boseman, who lost her reelection bid in the primary, had voted in recent years with a Republican bloc on the board and made her party switch official this summer.

Should current results hold, voters appear to have elected Democratic Commissioner Rob Zapple for a third term. (Note: Local results are not final until the New Hanover County Board of Elections completes its canvass on Nov. 18.)

Zapple earned the second-most votes, behind newcomer to the board – but not a political newcomer – Republican LeAnn Pierce. The former mayor of Carolina Beach said she didn’t anticipate earning the most votes among the four commissioner candidates on the ballot.

“Honestly, I did not expect that,” she said. “I knew that it would be a close race.”

Pierce is ready to get busy. She said her first call was to the county clerk to get the upcoming slate of commissioners’ meetings added to her calendar. After thanking volunteers, voters and getting her schedule set up, Pierce said catching up on county projects and getting to know staff are at the top of her list. “I think we have to get probably under control some of the growth and development,” she said.

Republican candidates swept the New Hanover County Board of Education, ending a short-lived Democratic majority. In 2018, Democratic newcomers first shook up a decades-long Republican board, and in 2020, the party secured a 5-2 majority on the school board.

With the new slate of elected board members – Pat Bradford, incumbent Pete Wildeboer, Josie Barnhart and Melissa Mason – Republicans have flipped the board’s political power back in their favor, 5-2.

A local referendum requesting a quarter-cent sales tax to fund public transportation failed by a 6 percentage point margin. In a statement, a New Hanover County spokesperson said it remains committed to Wave Transit through its regular budget funding.

“The Wave Board will work with their staff to determine how best to move forward with additional grants or other opportunities to help prioritize some of the projects that were identified as priorities for the sales tax,” the spokesperson stated. “Without the dedicated source of continuous revenue that the sales tax could bring, that work will take more time – but public transportation connectivity, accessibility and efficiency will continue to remain a priority for the county.”

On the federal side, U.S. Rep. David Rouzer was reelected by a 15 percentage point margin over Democratic challenger Charles Graham. “Voters are tired of inflation, crime, high gas and utility bills, and economic decline which are all the result of bad policies grounded in left wing ideology that defies common sense,” Rouzer said in a statement Tuesday evening. “Tonight is the beginning of a resurgence for the values and principles that made America great.”

“The Republicans picked up a couple of seats in this cycle, but they did not secure a supermajority as they had predicted,” Butler said in a statement Wednesday. “That means that NC House Democrats will be able to support Governor Cooper and his veto authority should any harmful legislation be forthcoming. I am proud of our campaign and I am honored to serve the citizens of New Hanover County.”

“In midterm elections, you typically have the ‘out’ party that has a lot more enthusiasm,” he said.

Many speculated the U.S. Supreme Court’s recent decision, Dobbs v. Jackson Women's Health Organization, which rescinded federal abortion protections, could help drive Democrats to the polls. “It's really impossible to say the effect of something like Dobbs,” King said. “But certainly, Dobbs put a damper in the red wave.”

“I would have predicted, mid-50s, high-50s,” King said for his expectation of statewide voter turnout. Compared to other states’ high-profile gubernatorial races, he said, “There was just not as much that was pulling people out to vote here in North Carolina.”

As is typical in election results, King noted ballot roll-off, whereby voters leave certain races blank. “they just kind of get tired,” King said of voters. Votes cast in a handful of certain local races with ballot roll-off could have made a difference, he said.

“About half of registered voters just didn't participate,” he said. “It's a reality check that I think people need to think about both from a ‘lower d’ democratic standpoint – the importance of voting – but also just from the consequential impact of this.”

New Hanover County Democratic Party Chair Andre Brown said that while the party would have hoped for a better local outcome, the main takeaway is that "the status quo reigned supreme in New Hanover County."

"Aside from the school board’s race, the incumbents on the county commission [Rob Zapple] and the N.C. General Assembly all held on to their seats," Brown said. "We were within striking distance in both the State Senate District 7 [Lee's seat] and the State House District 20 [Davis' seat] race."

Though Democrat Cheri Beasley lost to Republican Ted Budd for a U.S. Senate seat, Brown said it was encouraging to see that Beasley won in New Hanover Conuty.

"We will lick our wounds for now, further examine and assess and get ready for the next election," he said.