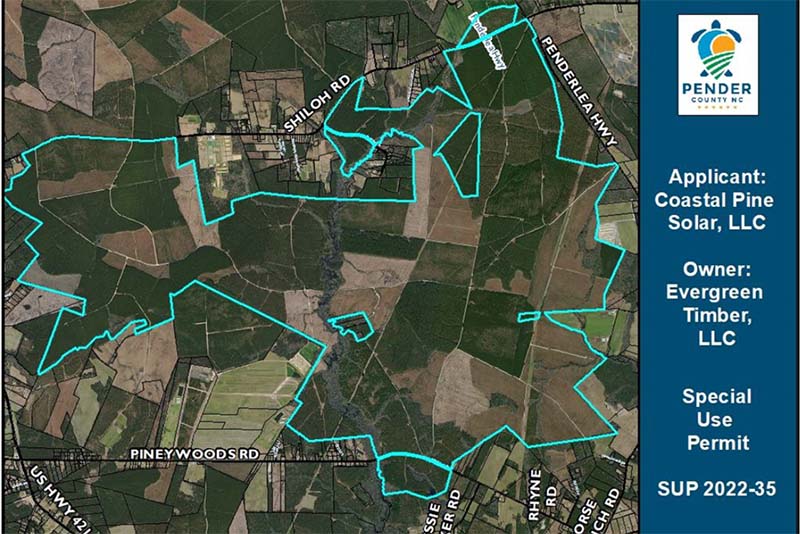 Coastal Pine Solar LLC proposed to construct a 2,360-acre solar farm in western Pender County. (Photo courtesy of Pender County)
The Pender County Board of Commissioners this week unanimously declined a special use permit request for a utility-scale solar farm proposed on the western end of the county.

The applicant, a subsidiary of California-based Birch Creek Development, proposed to build a 200-megawatt solar farm spanning 2,360 acres. Through a proposed power purchase agreement with Duke Energy Carolinas, the operation would have been capable of powering 50,000 homes, the developer estimated.

The subsidiary had plans to purchase 2,360 acres on 6,587 acres of property owned by Evergreen Timber Co NC LLC, which maintains the land as a timberland investment. The land in question and nearly all surrounding properties are zoned rural agricultural.

Coastal Pine Solar LLC Attorney Thomas Terrell said that changes in state law prompted the need for larger solar projects, as operators must participate in a competitive process to provide renewable energy to Duke Energy’s grid. “This is a large project. This sometimes is the elephant in a room,” Terrell said. “And people say, 'Why is it so large?' And the answer is: Duke Energy.”

Terrell told the board that solar farms in North Carolina have been shown to generate more taxes than agriculture, despite the ad valorem tax abatement granted to these operations. The proposed operation would not draw on county services, he said.

The panels have a 25-year warranty and are expected to last up to 40 years, Terrell said. County staff had proposed requiring a decommissioning plan prior to approving the project.

North Carolina has about 800 solar farms, Terrell said, with over 700 having been approved via the special use permit (SUP) process.

Multiple neighbors spoke against the proposal, critiquing the lack of jobs it would create, among other complaints. “From an agricultural standpoint, we’re not allowed to clear land to raise crops,” farmer and neighbor Charles Rooks said. "I question why we should be able to clear land and take it out of timber production to build and put a solar farm on it."

Commissioner Jackie Newton said she was concerned that clearcutting large swaths of land would further exacerbate the area’s flooding and runoff issues.

“I see this as light industry,” she said. “It has no business in a rural agricultural area.”