County OKs Use Of $1.9M For Affordable Housing Project 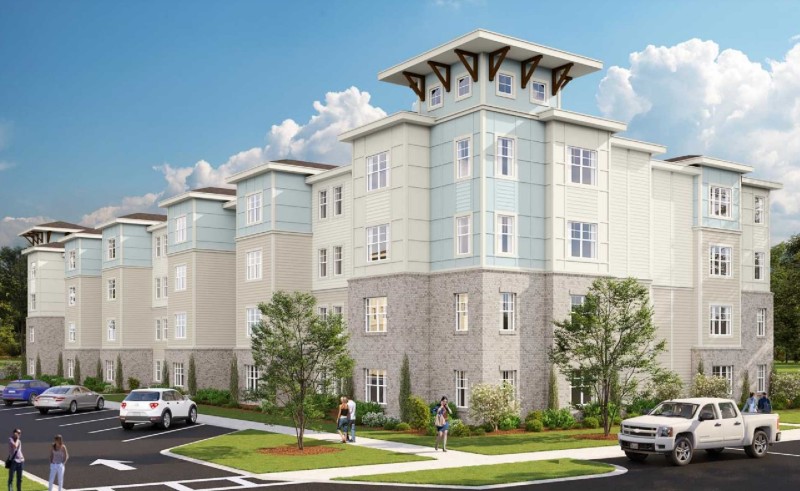 Starway Village is a 100% affordable housing project planned for Carolina Beach Road. (File rendering)
County officials on Monday agreed to set aside nearly $1.9 million to help an affordable housing apartment project come to fruition in the city of Wilmington.

The New Hanover County Board of Commissioners voted unanimously Monday morning to grant a developer's request for the gap funding allocation. The funding, which has been referred to as gap financing, would be considered a grant rather than a loan and would not be paid back, county staff members told the board.

The project, a 278-unit apartment development planned on the site of the Starway Flea Market at 2346 Carolina Beach Road, could get another $3.5 million in gap funding from the city of Wilmington if the city council gives the go-ahead at an upcoming meeting.

The total request for the project, nearly $5.4 million, would leverage about $54 million in tax credit equity and financing. The developers have applied to the N.C. Housing Finance Agency for a 4% Low-Income Housing Tax Credit (LIHTC) award and a tax-free bond allocation.

The 4% award is less competitive than the 9% LIHTC option, developers and county officials said.

The complex, dubbed Starway Village, would include one- to three-bedroom apartments with rents from $699 to $900 a month. The units are expected to be affordable to working households earning from $32,000 to $50,000 a year.

"The rent proposed for the project will provide a level of affordability that's not generally seen by market-rate proposals, which recently have run around $1,300 a month for one bedroom, $1,800 a month for two bedrooms and $2,200 a month for three bedrooms," said Rebekah Roth, New Hanover County's planning and land use director, during the county board meeting Monday.