Courthouse Renovation, Resiliency Project To Be Highlighted At Open House 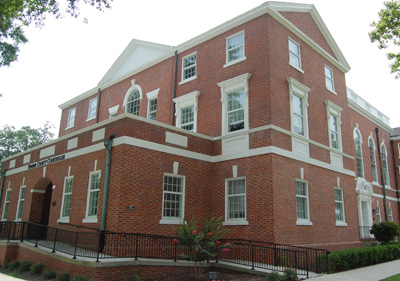 The Pender County Courthouse in Burgaw has undergone extensive interior renovations. (Photo courtesy of Pender County)
The restoration of a landmark historical building in downtown Burgaw will be shown off next month.

The Pender County Board of Commissioners is hosting an open house of the restored and renovated Pender County Courthouse on Aug. 6, according to a news release.

The general contractor was Wilmington-based Thomas Construction Group and the architect was LS3P.

"Thomas Construction Group is excited to see the 85-year-old Pender County Courthouse open its doors again after Hurricane Florence damaged the historical building in 2018. This has been a marquee project for Burgaw and the entire County and we’re proud to play a part in preserving the integrity of this landmark," said Chris Reid, president of Thomas Construction Group, in an email Thursday. "We hope the courthouse activity will provide continued growth for the downtown district of Burgaw."

An amendment approved by county officials in December priced the contract for the interior renovations at about $4.6 million.

The county used the construction period to make the building at 100 S. Wright St. in Burgaw more resilient after the hurricane damage, the release stated.

“Our goal in this construction project is to make this ... building more resilient and preserve it for future generations,” said Allen Vann, assistant county manger who oversaw the courthouse project, in the release.

"The courthouse also required lead and asbestos abatement, ADA improvements and repair and replacement of plaster work, as well as custom woodworking, a new elevator shaft and new courthouse seating," the release stated. "Exterior work included brick repointing as well as replacement, sealing, and painting of weathered wood around the windows, doors and roofline."

Vann said in the release that these exterior measures protect the building from rainwater and moisture.

“A generator has been added that will power up the entire building, including the HVAC system,” he said in the release. “Mechanical and electrical equipment were relocated to the main floor from the basement.”

The courthouse, built in 1930s, has served Pender County for decades, said George Brown, chairman of the Pender County Board of Commissioners, in the release.

According to the release, at 4 p.m., the commissioners and dignitaries will conduct a brief dedication and installation of a new plaque.