The Man With A Plan Moves On 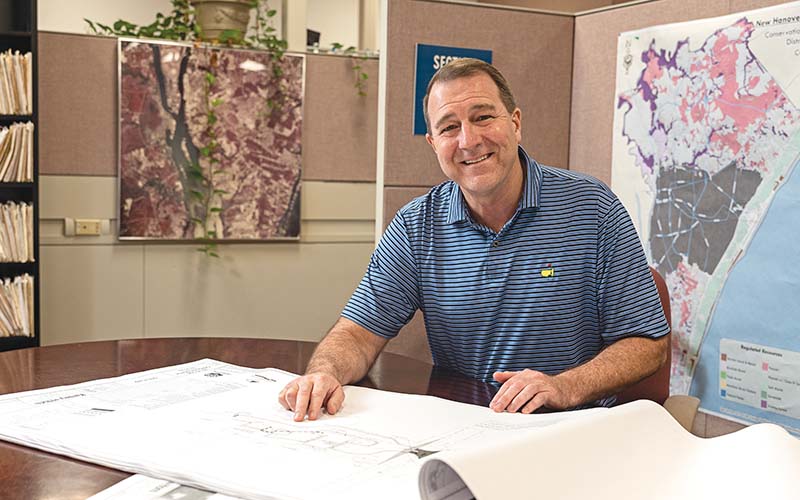 Clark is moving back to Florida, the state where he previously worked and where his family still has a home. He’ll be the economic development director for the city of DeBary. Clark has been replaced for the time being by his chief deputy, Rebekah Roth, who started Oct. 24 as New Hanover County’s interim planning director.

While Clark, a veteran planner, has received accolades for his work here – notably wrestling an octopus- like mishmash of land-use rules into one Unified Development Ordinance (UDO) – it likely will be years before the results are evident.

As an illustration of the “longgame” nature of land-use planning, Clark’s most visible local work is the redevelopment of the north end of downtown and the area that is now home to Mayfaire – projects he worked on as Wilmington’s planning manager in the early 2000s.

The UDO exists primarily on paper for now, but Clark understands its importance.

“When I got here, the county had adopted a comprehensive plan, which was the first time there had been an actual document kind of looking at how growth should be done,” Clark said.

With the county becoming increasingly urbanized, the population booming and land values soaring, large lots with individual wells and septic tanks no longer were seen as the best way forward.

This new philosophy faced one gigantic hurdle – it wasn’t aligned with the zoning ordinances and the development rules the county had in place.

Clark said, “The unified development ordinance project was to take the older zoning codes that we had in seven different documents – seven different sets of rules … each one of them with its own definitions and policies and procedures” and make one document.

“The objective was to put them all in one book, make them all consistent, efficient, so you didn’t have to look through (multiple) sets of definitions, and then modernize them so that the philosophy of a comprehensive plan could actually be implemented.”

And there was another major challenge in mapping out a future for the county; in North Carolina, counties are limited in what they can do in terms of infrastructure.

In the county, “we don’t do roads and when the water and sewer system is a utility authority, not something under the direct control of the county, you really can’t effectively build an urban area without being partners with the utility and infrastructure providers.”

Clark’s efforts to pull disparate groups together is a skill that won him praise.

“Wayne Clark has that rare ability to be able to combine economic development, politics and planning,” Donna Girardot, chairwoman of the New Hanover County Planning Board, said after Clark announced he was stepping down.

Clark sees those working relationships as an asset for the county, and something he’s not always seen in other areas where he’s worked.

“I would say probably one of the biggest positive things that I’ve found here in New Hanover County is that these organizations are very easy for us to work with,” he said. “They have all been very good partners. I don’t think I’ve ever worked anywhere where I had a better relationship with the DOT, the MPO (Metropolitan Planning Organization), the other local governments, the airport. In most parts of the country, these organizations usually butt heads and here we all work together.”

As for what lies ahead for the county, Clark said that although the Unified Development Ordinance is on the books, it will take years for its impact to be fully felt, as what’s on the ground becomes more closely aligned with the UDO’s vision.

One section of the county that Clark finds promising is Castle Hayne.

“Castle Hayne and Wrightsboro are incredible areas,” Clark said, noting not only their relatively easy access to downtown, the airport and Interstate 40, but also the fact that they’ve maintained their unique character.

Clark believes that the rural area in an urban county will change but, if done right, has a great future built around its natural setting of the Northeast Cape Fear River and its agricultural heritage.

As Clark heads back to Florida, much of the new chapters for downtown’s north side and the Mayfaire area will have been written. The story for Castle Hayne and other unincorporated parts of the county remains unknown. If he comes back to visit in 10 years, the changes may still not be evident.

And although Clark says he hasn’t sowed the seeds for the county’s future, he is satisfied that he’s helped shape the ground where those seeds will be planted, someday influencing the character and livability of a future New Hanover County.

It’s the life of a planner.