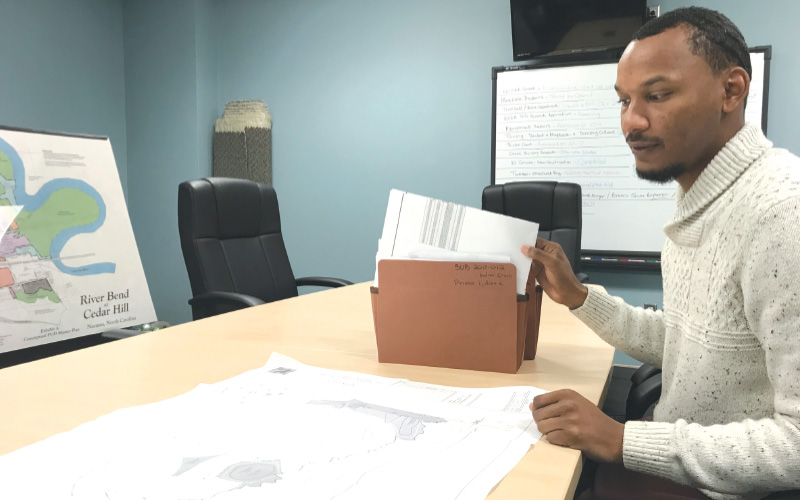 “October saw the [Brunswick County] Board of Commissioners unanimously approve the appropriation and execution of a series of contracts and notices of bids for the Northeast Brunswick Regional Wastewater Treatment Plant expansion project,” wrote County Manager Randell Woodruff in a recent report. “This is an important step forward for the project, which will increase the plant’s total capacity to support the increasing development we’re seeing in northern Brunswick County.”

Also this year, the town of Navassa in northern Brunswick moved closer to more residential growth with the advancement of major projects that are expected to add thousands of residential units to the community of 2,100.

Town officials this year granted preliminary plat approval for at least 322 homes in a part of one development, River Bend at Cedar Hill, and 100 homes in a community expected to be called Indian Creek. Both developments are close to the Interstate 140 bypass, which opened in December 2017.

Mayor Eulis Willis and Barnes Sutton, Navassa’s director of planning and development, said I-140 is leading to more interest from developers.

“I guess the No. 1 impact would’ve been I-140 coming through. That just kind of opened us up to the world because now all of the sudden we’re accessible,” Willis said. “We’ve got all this cheap land that’s vacant within five minutes of Wilmington.”

In Leland, new restaurants opened, apartments were on the rise, town officials initiated the annexation of parts of Lanvale Forest, and more businesses were being planned or opening to serve an increasing population.

Some of the most recent new construction projects noted in a December report from the town’s economic development panel: A new mixed-use development that will include a brewery in the first phase is planned for a 5-acre site on Old Fayetteville Road; site construction is underway for the Hawthorne at Waterside apartment community at U.S. 17 and Hewett-Burton Road, with 11 buildings and 276 units in the first phase; at Leland Town Center, shell construction continued on a 9,000-square-foot retail building that will include Starbucks, Heartland Dental, Firehouse Subs, and AT&T; and construction continued on the 120-unit Leland Station apartment community in the Waterford Commercial Village.

While the northern section of Brunswick County garnered much of the attention in terms of the county’s recent boom, growth wasn’t limited to Leland and Navassa.

Kirstie Dixon, Brunswick County planning director, noted in a data book on the county, “Currently, Brunswick County is ranked 1st in percent growth among counties in North Carolina.”
For a full list of the top stories of 2019, click here.