County Commissioners Step Back On Special Use Permit 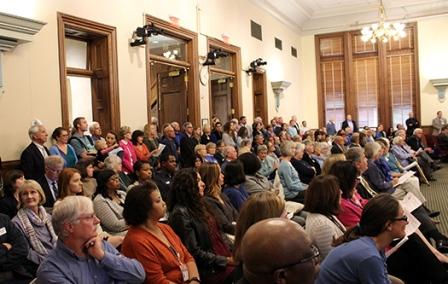 An overflow crowd was on hand Monday to witness the county commissioners table the public hearing on SUP. (Photo by Vince Winkel)
The New Hanover County Board of Commissioners pushed back on special use permits on Monday when it tabled a scheduled public hearing on the topic with an overflow, standing-room only crowd packed inside the historic county courthouse.

The motion to table the item passed 4-1, with Chairwoman Beth Dawson the lone dissenter. It was Dawson’s last full meeting as a commissioner, after having lost in the primary in the spring.

The commissioners had placed the SUP on their agenda to discuss the issue and open it up for public comment, even though on Nov. 3 the planning board had voted not to send their revised version of the ordinance to the commissioners, instead opting for at least one more work session. That work session is set for Tuesday at 2 p.m.

At issue are text amendments within the SUP ordinance, and also the contents of its Table of Permitted Uses (TOPU).

There was frustration Monday, when the commissioners voted to kill the public comment portion of the meeting by tabling the topic.

“Personally I think the commissioners should have had the public hearing,” said Mike Giles of the N.C. Coastal Federation, an active voice in the SUP revision process. “We have all these concerned citizens who want to be involved in their government who came out. They should have let them have their say, and then close the public hearing, and then table it. That would have been the decent thing to do.

“So the new board will vote on it. That’s two Democrats and three Republicans,” Giles said, referring to the recent election results for the board. “Now I don’t think it should be a Democrat or Republican issue, or a business or environmental issue. It’s a community issue. That is what’s important.”

The Wilmington Chamber of Commerce released a statement Tuesday morning, after digesting the commissioner’s move on Monday.

“The Wilmington Chamber of Commerce applauds the decision by the New Hanover County Commissioners to let the Planning Board continue its work to revise the County’s industrial special use permit process,” chamber chairman Mitch Lamm said in the news release. “Since March, New Hanover County staff has been working on a revised version of the permit process to address issues regarding lack of transparency, indefinite timeline and too-few permitted uses.

“For the last several months, the Planning Board – along with representatives from the Chamber, BASE and other local advocacy groups – has studied and deliberated this complex document line by line during several work sessions,” the chamber statement continued. “All parties have offered input, and all have had the opportunity to make their case for specific revisions. As the revisions have been incorporated, the text of the permit process has been much-improved. However, there is still work to be done, particularly regarding the Table of Permitted Uses (TOPU).”

Giles of the Coastal Federation agreed that the TOPU needs work, although not what the chamber is looking for.

“The narrative is closer than the Table of Permitted Uses (TOPU)," he said. "The TOPU is a large document. What they should do is focus just on the industry and not worry about all the other uses, which are day care centers and cell towers and businesses and residential development.”

The next county commissioner meeting is Dec. 5, when the new board is seated at an abbreviated meeting.

“I will look forward to the final version the planning board brings to the county commission next year,” said commissioner-elect Patricia Kusek on Tuesday.