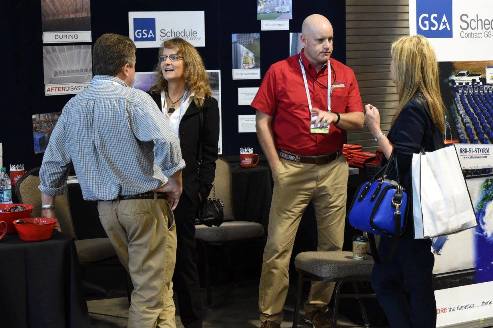 The FEDCON trade show allows networking between federal agencies and businesses. (Photo courtesy of NCMBC)
There will be deals to be had, hands to shake and businesses looking to prosper this week at the Wilmington Convention Center.

That’s because a number of military and government agencies and organizations will be at the 2016 Southeast Region Federal Construction, Infrastructure & Environmental (FEDCON) Summit as it comes to the convention hall Oct. 26-27. The event brings over 700 representatives of military branches, federal agencies, general and specialty contractors, designers and construction suppliers from throughout the Southeast.

It’s organized by the N.C. Military Business Center (NCMBC) and is no stranger to the banks of the Cape Fear River. Wilmington has hosted FEDCON at the convention center since 2011.

The summit is seen as particularly valuable for those businesses new to bidding on federal contracts.

“FEDCON and the NCMBC provide the missing link between smaller specialty companies such as ourselves, and prime military contractors,” said James Cornette of Hampstead-based Applied Resource Management, one of this year’s sponsors. “Scott Dorney and his staff at NCMBC have been invaluable in opening the pathways to allow us to work on-board military facilities throughout the Southeastern United States.”

“The FEDCON Summit is critical in providing the opportunity for business to learn the workload for projects in advance that will facilitate their identifying projects to compete for and opportunities to team with other businesses," said Courtney Smedick of NCMBC in an email Monday. “Businesses can also attend sessions and speak one-on-one with government officials who can explain to them how to leverage small business opportunities with the government. They also can participate in a one-on-one dialogue with prime contractors to learn what is required for them to participate on the prime contractors’ teams in executing federal contracts. All of the above applies to small business general contractors, specialty contractors, architects, engineers and construction supply companies.”

In addition to various seminars and workshops, Thursday also includes an all-day trade show featuring those businesses looking to score a federal or military contract.

The Department of Defense has an annual impact of about $48 billion and is the second-largest sector of North Carolina’s economy, according to the NCMBC. The state has six major military bases, 116 National Guard and 40 Army Reserve facilities and the third-highest number of uniformed military personnel in the country.