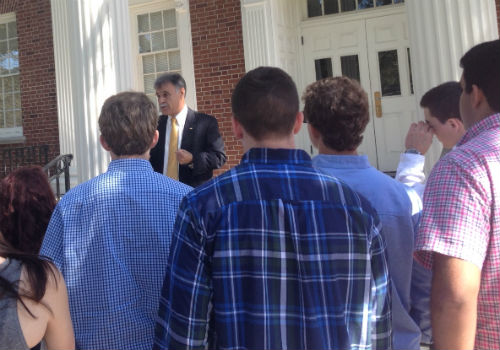 Officials at University of North Carolina Wilmington were upbeat Wednesday following the passage of the $2 billion Connect NC bond referendum Tuesday. UNCW will receive $66 million of bond funds for a new facility.

Funds from the bond will also benefit the other UNC system institutions and the state's community colleges, while also making improvements at state parks and the N.C. Zoo, among other infrastructure projects.

“By voting for this bond, our citizens have affirmed North Carolina's long-held belief in the transformative power of higher education,” University of North Carolina Wilmington chancellor Jose Sartarelli said in a prepared statement Wednesday morning, in which he expressed his thanks to voters. “In addition to the tremendous impact this will have on UNCW's ability to provide health care instruction as well as additional resources for our military population, the bond will help power continued economic growth for our region and ensure better lives for current and future citizens.”

Statewide, Connect NC passed 65.5 percent to 34.4 percent, the N.C. Board of Elections website reported. The results were narrower in this area, however, with Pender County voters defeating the referendum 55 percent to 45 percent.

In Brunswick County, the bond referendum passed by about 57 percent to 43 percent. And in New Hanover County the margin was narrower: about 55 percent for the bond to about 45 against.

Opponents of the referendum had said they feared the bond would raise taxes, despite proponents' assurances to the contrary. Others did not support it because it did not include the statewide transportation improvements included in the original $3 billion bond package.

At UNCW, its funds allotment will be used to build a 165,000-square-foot facility, the third of four that will anchor the Health Sciences quadrangle. This is the largest state investment in a single facility at UNCW ever, the chancellor said.

The new building will house academic programs in the College of Health and Human Services and related offices and learning centers that are “critical to UNCW’s ability to produce more health and human services professionals,” university spokeswoman Janine Iamunno said last September.

UNCW plans to move quickly on plans for the facility, now that the bond has passed, Sartarelli said Wednesday morning.

“If we are very efficient, we could possibly break ground in 2017,” he said in an interview. “That would be perfect, as we celebrate our 70th anniversary next year.”

Brunswick Community College will use the nearly $3 million it receives from the bond issue to renovate and repurpose existing facilities, college spokeswoman London Schmidt said Wednesday.

"The college is pleased that the Connect NC Bond passed," she said. "Both the college and the [BCC] foundation had signed a resolution in favor of the bond. The college will be using bond funds to repurpose space for Allied Health and to update Science and Welding Labs. This follows the College Facilities Strategic Plan."

BCC president Susanne Adams was part of a panel that joined Gov. Pat McCrory at UNCW to advocate for the referendum last Wednesday.

"The passing of this important legislation will have a lasting impact on our students as well as on our community," she said in the statement. "By approving the Connect NC Bond, North Carolina voters have demonstrated their continued support for education in our state. I look forward to working with our Cape Fear Community College Board of Trustees to determine how we will utilize these funds to further our mission of providing world-class educational experiences and job training opportunities for students and businesses in the Cape Fear region."