For Both Menu And Building, Three10 Is Marriage Of Old And New 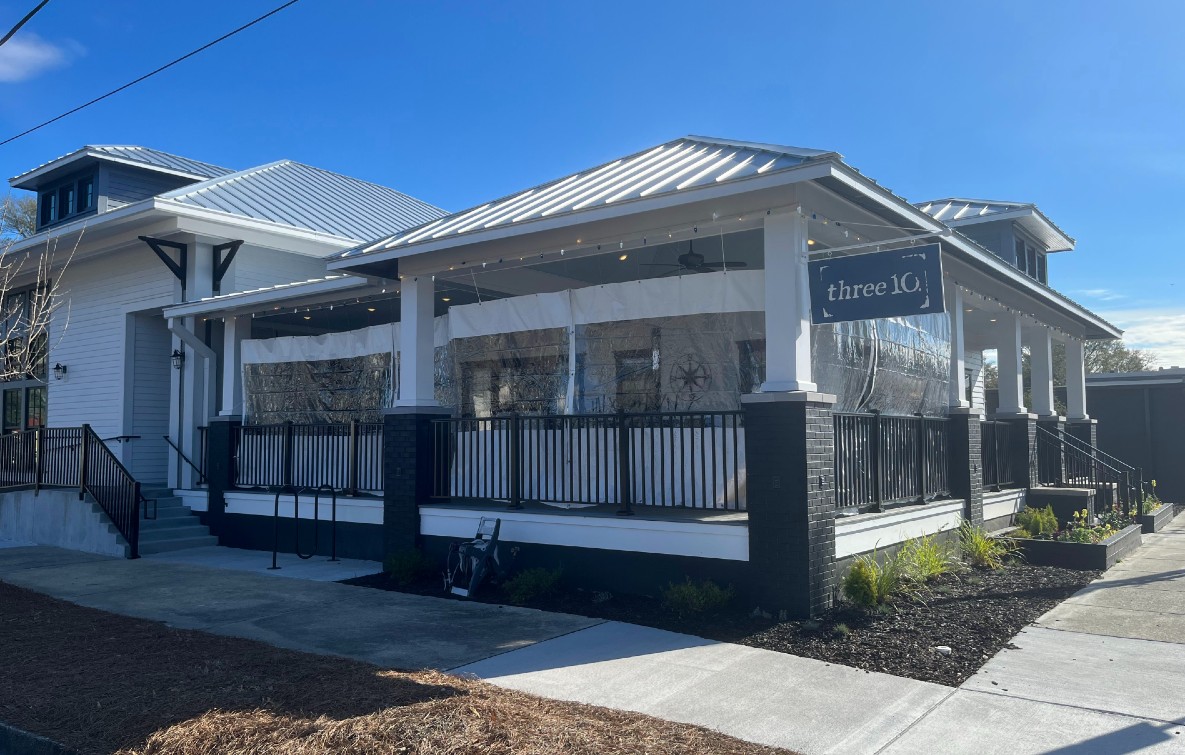 three10 recently opened at 1022 N. Fourth St. in Wilmington. (Photo courtesy of three10)
As the North Fourth-Brooklyn Arts District (BAD) area continues to experience a rebirth, most of the food-and-drink businesses remain on the south end of the upstart corridor, closer to the traditional downtown commercial district. That’s not the case for three10, an eatery that recently opened at North Fourth and Swann streets, closer to the Isabel Holmes Bridge than to downtown.

Owners Jennifer D. Concklin and Matt Walker, who are married, didn’t move mountains to open the restaurant in what they see as an up-and-coming area, but they did move a house – a historic bungalow, to be exact.

Even before taking a step inside, three10 presents a fresh vibe – something old melded with something new – that is a bright addition to a part of the district that, when it comes to the existing buildings and lots, remains a little rough around the edges.

“When looking for a restaurant space with Terry Espy [Momentum Companies], I told her, ‘I’d love a cute little bungalow that we can convert,’” Concklin told the Greater Wilmington Business Journal on Tuesday. “She knew about the Historic Wilmington Foundation’s (HWF) desire to move and save the bungalow from demolition. We met with the director of HWF at the time, Beth, and decided to work together to get it moved. We personally (with help!) removed the roof and porch so it could get moved, and HWF helped offset the cost.”

The restaurant’s name pays homage to 310 Bladen St., the former location of what now serves as three10’s dining room.

“Upon visiting the restaurant,” Concklin said, “you will see care was taken to preserve the beauty of the original building, including, but not limited to, the original windows and floors.”

The house, originally a hipped-roof Craftsman style, was built for Richard Lloyd Allen, a yard conductor at the then-nearby Atlantic Coast Line Railroad. In 1952, it was purchased by the Oliver family, who also had ACL ties.

Concklin said the response from customers has been “welcoming and overwhelmingly positive. And the owners are the first to admit that the building is a great selling point.

“Most patrons are wowed first by the building itself – it's a unique merging of old and new – then they come back for the hospitality and the fresh menu selections,” Concklin said.

Once the bungalow was relocated, a rear addition was added to serve as the kitchen area. The classic Craftsman lines and metal roof pull the two buildings – one a century older than the other – together almost seamlessly, an architectural wedding that makes the whole greater than the parts.

“We are really happy with the craftsmanship and overall build that Uhl Inc. (general contractor) and Gordon Hall (architect) created,” she said. “Guests also seem to appreciate the historic nature of the bungalow segued into the more-modern, open kitchen.”

Some of Hall’s other projects include Waterline Brewing Co. and City Storage, which also is on North Fourth.

Of course, the heart of three10 lies in the kitchen, Walker’s domain. The menu is limited -- don’t look for the seemingly countless options some restaurants offer -- and focuses on “fresh modern seafood dishes highlighting traditional ingredients of the coastal and low country Carolinas along with updated classic cocktails.” Three10 also rotates new food items as draft beers.

“Our selections are a little different from what you might find at similar restaurants,” Walker said.

Like the restaurant building itself, the menu offers new takes on some traditional fare.

“Guests have been pleasantly surprised by our take on Southern cuisine,” he said.

Concklin said that for a new restaurant – particularly one that opened during the offseason and amid a COVID-19 resurgence – business has been good.

“We are excited to see what spring and summer look like, especially as we will be able to finally use our gorgeous porch,” she said.

“We try to have fun at three10 while still providing an upscale yet welcoming-to-all dining experience.”

The eatery is located in the Brooklyn Arts District, 1022 N. Fourth St. Winter hours are 5 to 9 p.m., Monday-Saturday.