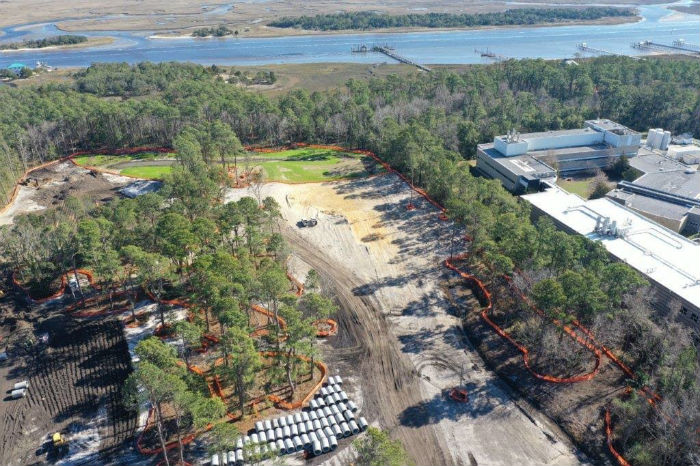 Trinity Landing (waterfront site shown above) is a Lutheran Services Carolinas development that's expected to include 124 apartments and 60 villas in its initial phase of construction. (Photo courtesy of LSC)
Construction started this month on a 50-acre waterfront development that caters to active seniors.

Located around the 5000 block of Masonboro Loop Road on the Intracoastal Waterway, Trinity Landing, a Lutheran Services Carolinas (LSC) development, is expected to include 124 apartments and 60 villas in its initial phase of construction, followed by 24 more villas in the second phase.

The project is expected to be complete by 2022, according to a news release.

The main difference between the villas, which number six to eight to a building, and the apartments, besides proximity to the water (the villas are closer), is that each of the villa units has separate parking in the form of a garage, LSC officials said Monday.

Amenities planned include a waterfront pavilion and dock with boat slips and kayak launch; three restaurant venues; a wellness center featuring a saltwater pool and spa; walking paths, biking paths and boardwalks; a dog park; an art studio; gathering rooms for clubs, meetings and events; an auditorium; a salon and spa; and a library and media center, the release stated.

W.M. Jordan Co. started building Trinity Landing on Aug. 3, and LSC closed Aug. 6 on $115 million in tax-exempt bank financing for the project. The Trinity Landing development is costing about $100 million, while $15 million will support other LSC projects, officials said Monday.

According to the release, while the COVID-19 pandemic has affected marketing efforts, virtual tours kept interest in Trinity Landing high, and the community is nearly 80% reserved, said Ann Pressly, director of marketing and sales for Trinity Landing, in the release.

The idea for Trinity Landing began 38 years ago with a donation of 30 acres on Masonboro Loop Road by Abba Lossen Crumpler and her niece Mae McFarland in memory of Capt. Tom and Annette Lossen and their children, the release stated. Crumpler was a member of St. Paul’s Lutheran Church in Wilmington.

“Mrs. Crumpler would really be pleased,” said the Rev. Robert Q. Beard, who was president of LSC at the time the property was gifted in 1982.

Subsequently, according to the release, Beard negotiated the purchase of an additional 20 acres to complete the 50-acre Trinity Landing tract.

“This project would not have happened without the partnership of so many collaborators," said LSC President and CEO Ted Goins in the release.

"Located near Trinity Grove, an LSC skilled nursing home, Trinity Landing will join Trinity Oaks in Salisbury, Trinity View in Arden, and Trinity Elms in Clemmons as an independent living option for seniors offered by Lutheran Services Carolinas, based in Salisbury, North Carolina," the release stated.

LSC is a nonprofit organization, and all of its skilled nursing facilities around the state (in Salisbury, Albemarle, Clemmons, Winston-Salem, Hickory and Trinity Grove in Wilmington) offer subsidized care to low-income seniors since Medicaid does not cover actual costs LSC incurs for these residents, officials said.

According to the release, LSC also serves foster children, refugees and individuals with developmental disabilities.