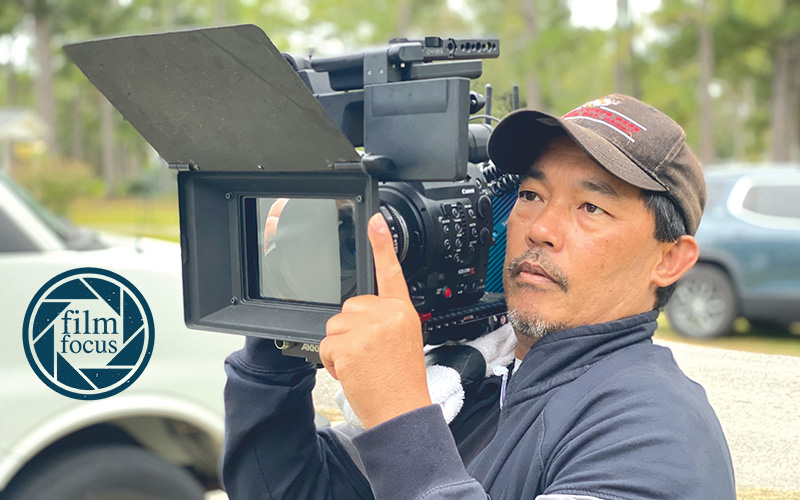 How did you get into the film business?

“Through my curiosity from being a movie background extra. I first started 10 years ago as a background extra on Iron Man 3 and have worked as a stand-in for a few prominent actors who have filmed in Wilmington, including actor and Marvel action star, Simu Liu. While my work has been primarily on projects in Wilmington, I have also worked on film and TV productions in Georgia, Tennessee and Washington, D.C.”

What does a stand-in actor do?

“The principals, or main actors, rehearse a scene before they shoot it. After they’ve completed the rehearsal, the stand-in is the person who steps in the place of the actor and helps the director of photography, camera department and electrical department set up the film shot with regards to composition, lighting, blocking, framing and focus.”

Did you have any prior entertainment experience?

“I'm from California and grew up in the Los Angeles area. In my ‘first career,’ I worked in Hollywood as a TV research analyst at Paramount Pictures.”

What is life like for a freelance camera operator?

“The TV reality series Divine Renovation [filmed in Wilmington in September of this year] was actually my first opportunity to be a camera operator. With this experience, I have a greater appreciation for the hard work camera operators perform. They are integral in the creative execution of filming a movie or TV program.”

Have you done other things for the local film industry?

“I’ve done still photography for independent films. And early in my acting career I did commercial work, including for Harris Teeter and Live Oak Bank.”

As a freelancer, do you work steadily?

“Over the past year, the film industry has better developed and put into place health protocol procedures, and work has been more frequent compared to 2020.”

What are some of your memorable projects?

What are you working on now? What is your next gig?

“I am now working with the producers of Divine Renovation to film a docu-series about a missionary network based in Houston, Texas. I'm also working on the development of a swimwear fashion media platform.”