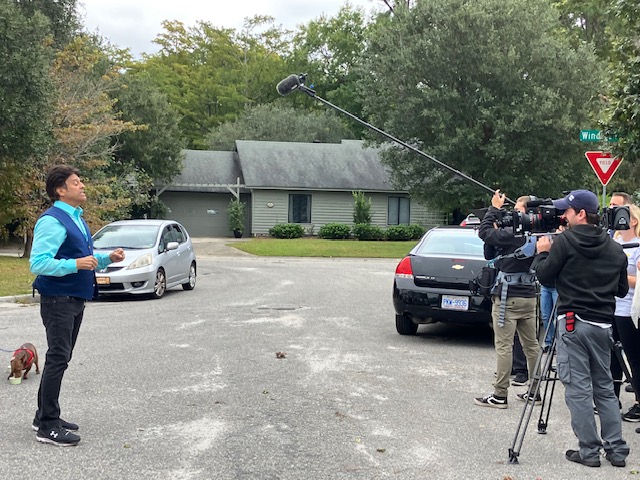 Erik Estrada films Divine Renovation in Wilmington.
North Carolina has been the backdrop for reality home improvement shows in the past – think Love It or List It, which filmed multiple seasons in the Research Triangle area – but the concept took on a new twist recently with a project in Wilmington.

Divine Renovation, a six-episode first season from New York-based Heartlight Entertainment, is a docu-series that, according to Heartlight producers, “takes the runaway success of home improvement shows and adds a spiritual element.” Through posts on Facebook and conversations with area churches and nonprofits, the producers found six Wilmington homes in need of simple changes to make them safer and more accessible for their residents, who were unable to make the improvements themselves.

With the needs identified, Divine Renovation piled on the resources: materials - some of them donated; and volunteer labor from business owners and crews from nonprofits like Catholic Charities, Family Promise and Coastal BUDS, and individuals who know the families involved or saw the posts on Facebook and just wanted to help.

“Total strangers reached out” to help, said Heartlight co-producer Monty Hobbs, who lives in Wilmington. He listed several businesses that got involved, including Burney’s Sweets, Uncle Louie’s Pizza and Vinedresser Lawn and Landscape Maintenance. “We even had a trumpet player from the Wilmington Symphony who came and played at one of the homes.”

It’s been all about relationships, said co-producer Valerie Smaldone, and the response from the Wilmington community was much larger than Heartlight expected.

“Now we have a lot of new relationships,” she added.

Heartlight landed Erik Estrada as its host. Estrada, famous for his role as Frank Poncherello in CHiPS, a popular crime drama series that ran from 1977 to 1983, has also become known for his turns in faith-based television shows. Paired with Estrada to oversee the repairs and enhancements was Logan Furlough, owner of Cardinal Pride Property Care.

Monday’s wrap-up project was at the home of Kerri Miller, a single mother with a nearly seven-year-old son, Dax, who has multiple physical and learning challenges. Vinedresser Landscaping owner Charlie Vette and staffer Steven Lamm removed overgrown shrubbery and installed low-maintenance landscaping to make the front and back yards a safe place for Dax to spend time.

Estrada said it had been an honor to meet and interact with the six households featured in the series.

“Everyone has a story,” he said, “There is some mishap that you wouldn’t know about. It blew my mind: learning of another person’s time and space and existence. I have spent a full week getting out of my space.”

Estrada said he was intrigued by the project when Hobbs called him about it six or seven months ago.

“Would I be interested? he asked,” Estrada said. “I told him to get his ducks in a row and give me a call.”

The next step for Smaldone, Hobbs and co-producer Matthieu Chazareix is editing. When the episodes are finished, Smaldone said, they will offer the series to their contacts in both streaming services and distributors. They hope to have an outlet for Divine Renovation by the first quarter of 2023.

As filming wrapped up Monday, the Vinedresser crew finished spreading pine straw in the front yard and the Boombalati’s Ice Cream truck pulled up to offer complimentary treats to Dax, his friends, the crew and volunteers. Miller reflected on her whirlwind day. Her landscaping had been transformed, she had a new kitchen floor, Dax’s bedroom contained a new bed and a new ceiling fan. Miller had enjoyed a session with a yoga instructor who, she said, helped her with tips on mindfulness and stress reduction.

“I work long days as a snack food distributor; my only sit-down time is when I’m driving. I eat lunch in the truck,” she said. “On weekends I spend time with my son to make sure his needs are fulfilled.

“I don’t think I have felt the entire impact,” Miller continued. “I have tried to thank everyone. For me, time is such a value, and these people have given their time to us. I am so grateful.”