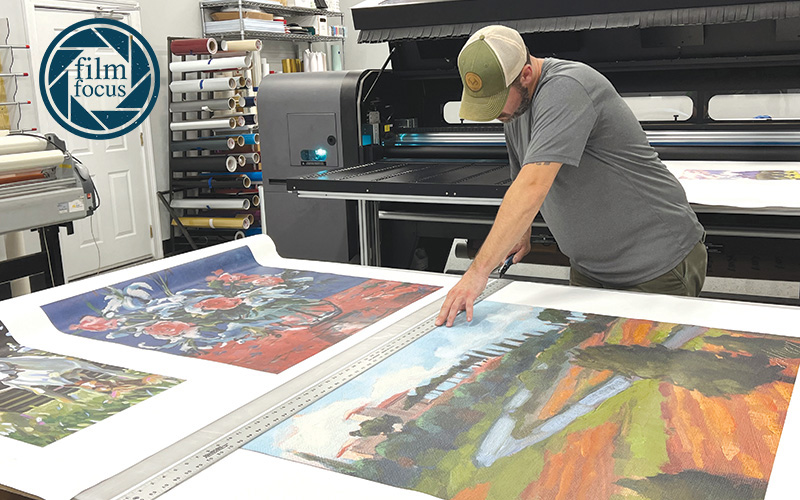 WHAT DOES THE COMPANY DO WITH REGARD TO FILM? Megan Hart, operations manager: “We do everything for their set in the way of decals, magnets, backdrop items, canvas art, vehicle graphics and set storefront signage: anything to transform a location here in Wilmington to be the place it’s supposed to be in the film. Notable recent projects have been Hightown and The Summer I Turned Pretty. We do a lot of movies for Hallmark and do something for almost every production that is filmed here.”

HOW DID YOU GET INTO THIS BUSINESS? Davis: “When I bought the company in 2008, the relationships with the film community were already there. We were Wilmington’s first sign company, so the company worked on early productions like Matlock and Firestarter because we were the only game in town at that point. We’ve grown those relationships because of our capabilities now. I made an effort, back in 2009-2010, when [then-governor] Bev Perdue worked to grow the film industry here: I got to know Johnny [Griffin, the Wilmington Regional Film Commission director] and learned how to foster better relationships with art directors.”

ANY MEMORABLE CUSTOMERS OR ANECDOTES? Hart: “Hightown: They wanted a church stained-glass window. We were able to give them the look of that stained glass with vinyl. It took some work, plenty of different samples. We also did a mirror for George and Tammy. It was for a scene with a very elaborate bar that had a patinaed mirror. A real patinaed mirror would have broken the budget. We were able to use mirror tiles, but it was very difficult to print and not ruin our printer in the process. We direct-printed onto the tiles. When an art director entrusts this kind of thing to you and you can do it, it’s a joy in the end.”

HAVE YOU SEEN GROWTH OVER THE PAST 18 MONTHS OR SO? Davis: “Absolutely. Last year was the greatest year of all time, the biggest year for North Carolina film ever. We knew it was going to be slower this year, but we’re still pretty steady, especially in the last month or two. Our growth is not solely attributable to film; we’ve grown as a company overall. It’s helped that we have bought machines to make things happen quicker, and we’ve added staff to provide fast service for the business we already have and to prepare for the time when film gets busier. One of the printers we purchased was to better serve film projects and shorten cure time.”

DO YOU HAVE CUSTOMERS OUTSIDE THE FILM INDUSTRY? Davis: “Most of our business is for clients in commercial construction, health care, higher education, commercial real estate and commercial interior design. Typically, the portion of our business coming from TV and film runs 5-7%. In 2021 it was 15%, which was huge.”

Editor’s note: Film Focus is a monthly series looking at the people and businesses that are local vendors to the film industry. To be considered for the Greater Wilmington Business Journal’s Film Focus feature, contact [email protected].