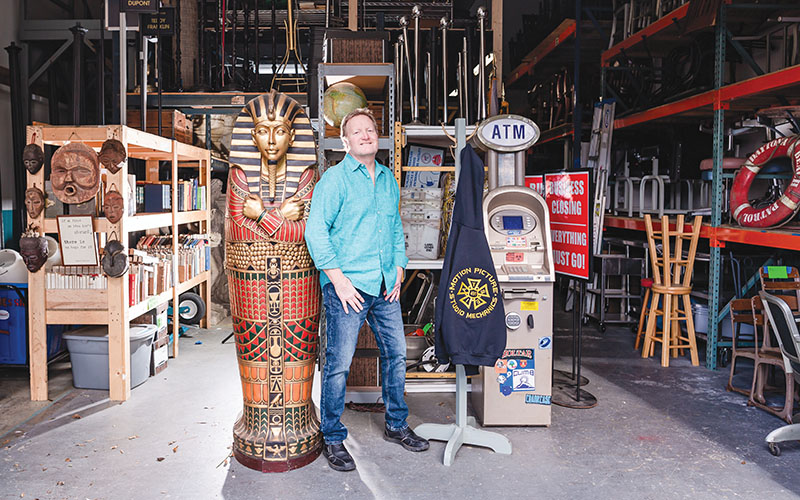 Matthew Sullivan is co-owner of the props and set decorating company SouthEast PROPS, one of many local vendors catering to the uptick in film activity in the region. (Photo by Terah Hoobler)
Strip away the glamour and the mystique, and the film industry is about people from a wide variety of crafts collaborating to create a product that the public will want. Since Dino De Laurentiis planted his studio in Wilmington about 40 years ago, the area has both attracted experienced film veterans and inspired locals with relevant skills to become part of film crews in this region.

There have been ups and downs over the years, but 2021 was the best year ever in terms of money spent in the area by movie, television and ad projects. That estimated $311 million in spending – for lumber, paint, props, transportation, on-set meals and a host of other necessities – translates into business for any number of local companies. Some of those companies cater exclusively to film projects; others see their bottom lines boosted by serving film projects as well as their regular customers.

“We’ve had our best year at SouthEast PROPS in 2021 directly because the state has finally figured out the incentives program and reinstated it,” said Matthew Sullivan, co-owner of the props and set decorating company (read more about the business in the Business Journal’s new monthly series Film Focus). “There have been more films filmed here than in many years. The incentive in place has bolstered the industry across the state.”

Sustainability is key if the film industry is to remain an important part of the region’s economy, says Susi Hamilton, the interim board chairwoman of the newly formed Film Partnership of North Carolina. That means the involvement of more local businesses since a film project needs a vast array of everyday materials, and if purchased from in-state providers, that ups a project’s qualifying expenditures for the North Carolina incentive.

Sustainability also means ensuring there will be enough trained and experienced people in the future who can do everything from building sets to rigging lights to performing stunts to accounting for every penny spent.

“A talented crew base is a factor in where productions, studios and their streaming subsidiaries choose to shoot their content,” said Darla McGlamery, business agent for Wilmington’s Local 491 of the International Alliance of Theatrical Stage Employees (IATSE). “In the dark days of HB2 [the so-called Bathroom Bill] … many talented crew members began renting apartments and living weekly in the Atlanta market. They left their families in North Carolina; some have moved everyone over to the ‘State too Big to Fail’ in content creation. In Georgia, the studios enjoy the less-stringent job incentive monies they qualify for.”

Despite what Georgia has done to lure projects, IATSE Local 491 has grown, and some key department heads have returned to North Carolina with beefed-up resumes from their time in the Atlanta market, McGlamery added.

IATSE is working with the city of Wilmington and the state’s Film Partnership on the launch of a $400,000 workforce training program, paid for by the city’s American Rescue Plan funds. Training is scheduled to begin in several weeks with about 100 locals enrolled. The city and its film community are excited at the prospect of creating a pipeline of job-ready crew members, Hamilton said.

“We have a solid [workforce] foundation – we did slip a bit from 2016 to 2020, but we understand where we are now and have to build on that foundation,” Hamilton said. “But that skilled workforce is not as diverse as it should be. There needs to be a conscious effort to diversify all aspects of that workforce. Wilmington has taken that big first step; now we’re in discussions with others across the state who are interested in doing what Wilmington has done.”

MovieMaker’s just-announced list of top small cities to live and work in as a moviemaker in 2022 ranked Wilmington eighth nationally. Editor- in-chief Tim Molloy believes the area has many assets.

“I think the future is very, very bright for Wilmington,” he said. “It’s a very livable, very affordable community. A lot of people are going to look for somewhere other than Los Angeles or New York to live in. They realize they don’t have to live in a big city at all as a filmmaker. They can live in a place that has a small-city quality of life.”

Molloy said that, per capita, Wilmington probably has more film activity than many other film centers like Atlanta. But he, too, emphasized the need to ensure a sustainable workforce.

“Albuquerque and Santa Fe [both of which ranked high on MovieMaker’s list] have a program to train up locals. Georgia is doing it too,” Molloy said. “Communities investing in their own people are going to do better, and cities will see the benefits of this. There will be more jobs for local people, as opposed to outsiders coming in and taking advantage of these opportunities.”

Hamilton pointed to the fact that California sets aside a small portion of its film incentive to support workforce training and development with an eye to diversity, equity and inclusion. The state of New York conducts workforce training, and the Georgia Film Academy has a sustained source of revenue for paid training.

“We do anticipate creating the foundation for a sustainable program with the city of Wilmington, and we’re currently working with other partners in the private sector,” she said. “Hopefully we’ll have some announcements in the coming months from around the state. I do believe the legislature has settled into a better routine as it relates to film.”