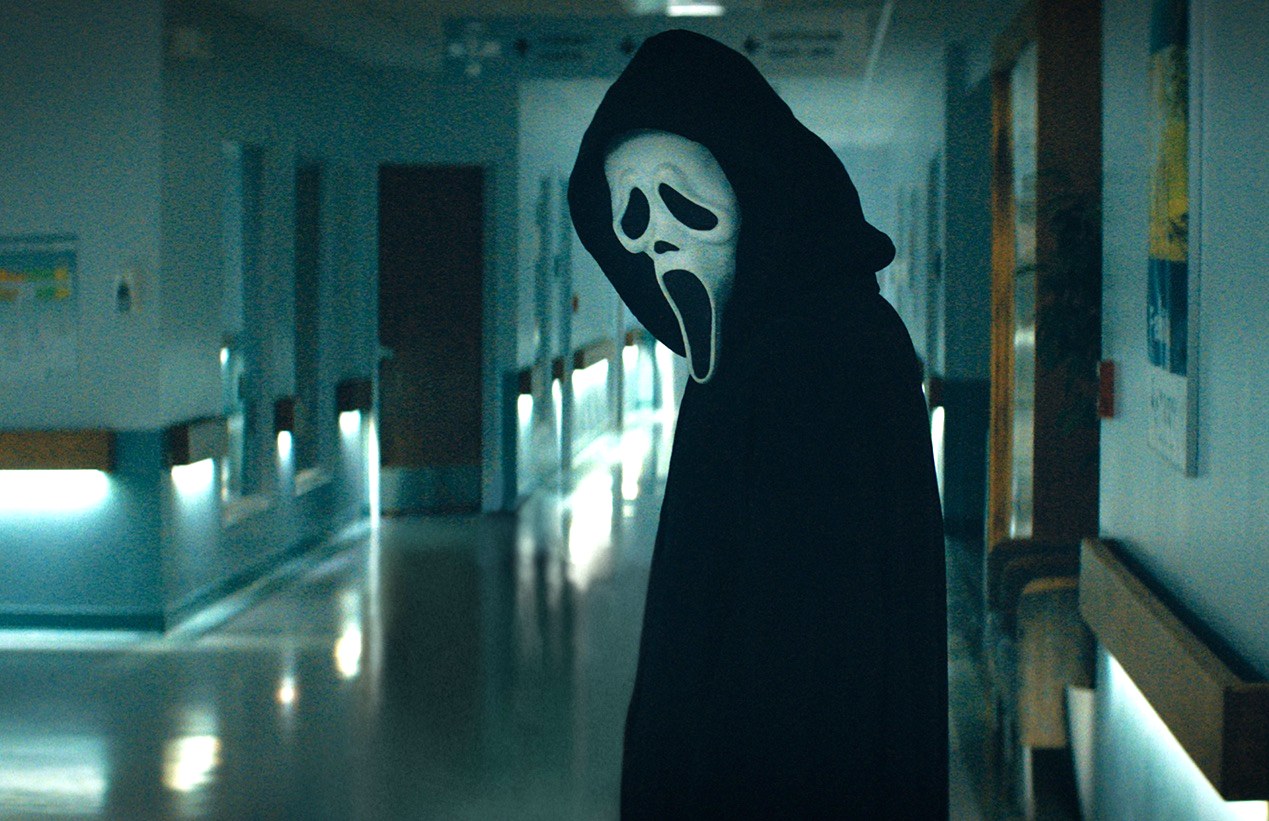 Shot in Wilmington, horror film Scream grossed $35 million over its opening weekend. (Photo courtesy of Paramount Pictures and Spyglass Media Group)
For the second time within a few months, a Wilmington-shot film has topped the box office in both the U.S. and Canada. In its opening over the Martin Luther King, Jr. weekend, Scream grossed about $35 million and dislodged Spider-Man: No Way Home from its perch atop the ratings. Since its Jan. 16 release, the slasher movie has sold more than $55 million in tickets worldwide.

The October release of Halloween Kills similarly slashed the competition to reach the position of No. 1 at the box office, earning nearly $50 million during its initial weekend run. It “smashed the opening-weekend box office record for a horror film released during the COVID-19 pandemic,” according to a story Oct. 17 in the Los Angeles Times.

Both Scream and Halloween Kills are good examples of feature film productions that work well in North Carolina, where the state’s Film and Entertainment Grant, which currently has a designated recurring starting amount of $31 million per fiscal year, can provide a grant of up to 25% of their qualifying in-state expenditures, with a limit of $7 million.

Halloween Kills was made on a budget of roughly $20 million; Scream’s in-state expenditures will total around $25 million, according to Gaster. Final numbers are not yet available for either film because a project’s accounting usually trails its release, but officials estimate that Scream employed about 125 local crew members.

In the past few years, Wilmington has seen quite a run of horror and suspense projects, noted Johnny Griffin, director of the Wilmington Regional Film Commission.

“One, The Black Phone, was filmed in 2021 and supposed to come out early this year, but its release date has been pushed [to June]. Another, The Georgetown Project with Russell Crowe, also has not yet been released,” Griffin said Thursday. “So, there’s Scream, Halloween Kills, The Black Phone, the Georgetown Project and The Conjuring. Typically, these are not big-budget films; they’re run-of-the-mill average.”

Does Wilmington offer very specific locations that are attractive for horror-thriller projects?

No, said Griffin, pointing to the very normal locations in the area where Scream filmed: in addition to using facilities at the EUE/Screen Gems Studios on 23rd Street, crews shot at the Wilmington Convention Center, Williston Middle School, Cardinal Lanes bowling alley and two private homes.

It’s the convenience and accessibility of Wilmington as a filming location as well as the availability of experienced department heads, crew members and support businesses that makes the area popular with studios, Griffin said. In an online interview, several cast members mentioned how much they enjoyed ordering Thai food from a local restaurant and being able to hang out together in a comfortable hotel environment.

The same goes for Hollywood-based film professionals who find Wilmington – and North Carolina in general – what Gaster calls “a pleasant surprise.”

“A lot of producers, some of whom have never heard of Wilmington, or they’ve heard of it but never been here, after spending several months here, they want to come back,” he said. “They’ll ask me to let them know if there are any opportunities with future productions. They want to come back, maybe bring their spouse, maybe make it a family vacation. There’s a great quality of life here, unlike some places where they film.”