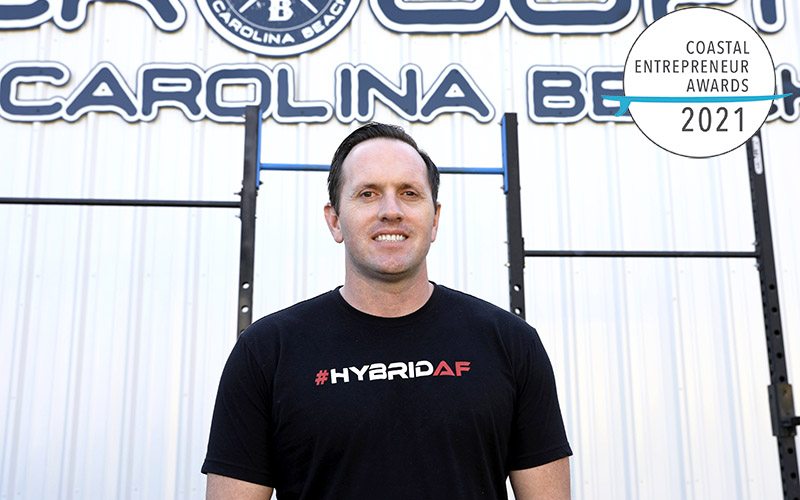 INTERNET-RELATED | HYBRID ATHLETE FOUNDATION ALBERT STEED, PRESIDENT & FOUNDER | YEAR FOUNDED: 2016 | EMPLOYEES: 4 (Photo by Aris Harding)
While it sounds like a simple idea, it’s one that isn’t widely available: go to the gym on your schedule any time of day or night when it works for your life.

But it is at the heart of Hybrid Athlete Foundation’s app, which allows that convenience for the athlete and security for the facility owner.

President and founder Albert Steed explained that the app came from years of working in software development while actively engaging in various athletic pursuits.

While in his last position, he founded a small gym, and six months later a software company, Hybrid Athlete Foundation.

When the gym Steed and his friends belonged to was sold, he and his wife started a gym in 1,200 square feet.

They expanded to 4,000 square feet and ran the business for almost three years before selling it.

It was there they implemented a keycard access control system. Interest from other gym owners intrigued him, so work began on the app.

“Everything is tailored for the gym owners. That’s the biggest driver,” Steed said.

Through the app, the owner can verify that the member signs a waiver, agrees to the club rules, is up to date on dues, etc. Owners can know in real time who is in the facility. Wilmington clients include CrossFit Carolina Beach, CrossFit Wilmington, FitMo Fitness and Training and Essential CrossFit.

“From an insurance perspective, when you use a keycard, you have to have phones and a lanyard. [The insurance company] doesn’t know if you have a functioning phone. With our app, they know you have a cell phone. Insurance agencies love that because they know there’s a phone nearby to make a call if they get hurt. We have an endorsement from one of the largest fitness insurers in our country,” Steed said.

They worked together to produce a best practice guide for 24/7 access gyms to be safe and compliant, he said.

Since startup, the company has expanded into almost 250 gyms in eight English-speaking countries including Canada and Australia, Steed said. The technology is built such that it can work anywhere in the world with a bit of customization for the local language.

It is designed to integrate with the top six gym management systems, which allows owners to use both systems for more complete control of their businesses. The design allows Steed’s system to be a value-added partner rather than a competitor, he said.

Steed said, “The fun thing about Hybrid is that it was started in Wilmington. I’m a UNCW grad; two of the other partners, brothers Matt and Paul Murray, are UNCW grads. The other partner, Phillip Tabor, is in Raleigh and handles the sales side.”

Update: This version has been corrected to change the name of the software company Albert Steed started after founding his gym.

Click here to meet all of this year's CEA winners