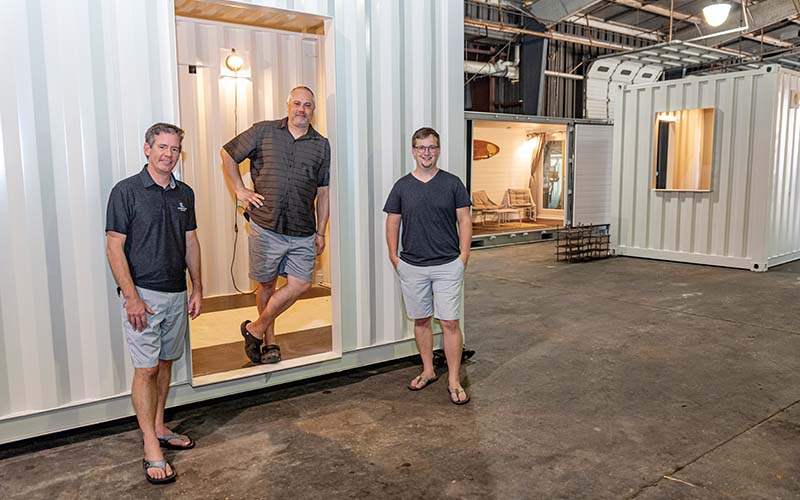 Craftspace COO Gregg Howell (from left), CEO Bryan Kristof and architect Ben Wilker are shown with the backyard units they are making from cargo containers. (Photo by Michael Cline Spencer)
No matter how big your home is, the coronavirus pandemic could be making it feel smaller after six months of working, learning and mainly just staying at home.

Inspired by his work with Wilmington’s Cargo District and its use of containers, Bryan Kristof has been working on a new company that offers a potential solution: backyard flex spaces made of shipping containers.

He founded Craftspace with Gregg Howell, with designs by architect Ben Wilker of Wilker Design Co.

“When I came over here [to the Cargo District in Wilmington] and I partnered with Leslie Smith, I moved Coworx over here at the very beginning, and then I collaborated with [Smith] on developing the concept for the Cargo District. When we did the Coworx space, that was kind of our first experience using containers,” said Kristof, who has since sold his interest in Coworx, a coworking concept. “Gregg actually is still a member of Coworx -- that’s how we met.”

Howell wanted to tap into something new.

“He came to me one day and said, ‘I’m kind of looking for something new and exciting.’ He has a background in the logistics and the trucking industry,” Kristof said. “That was a nice complement to what we needed.”

They formed Craftspace in January with a different idea than what eventually worked out.

“Really the initial focus was to kind of upcycle these containers to create spaces primarily for outdoor glamping or camping, that kind of thing,” Kristof said. “So we got about three months down the road working on some design ideas and then of course the bottom of the world fell out in March. So we quickly pivoted over to focus on creating some smaller backyard spaces.”

The U.S. contains millions of unused shipping containers, according to the Craftspace website.

“That’s 960,000,000 SF of space. Enough to build 7 Empire State Buildings every year, for the next 50 years,” the website states. “At Craftspace, we’re putting these containers back to work by creating modular building solutions for the great outdoors.”

Craftspace has partnered with Gulfstream Steel & Supply, out of Holly Ridge, to handle the steel fabrication for the backyard flex spaces.

“For this particular flex space product, we actually took a 40-foot container and we chopped it up into four smaller sections that we can use for these backyard spaces,” Kristof said.

Where do they get their containers?

“Right now for the first flex space units that we’re building Gulfstream, who’s our steel fabrication partner, they’ve been sourcing the containers for us,” Kristof said, “For other projects we’ve done in the past we’ve used other local brokers.”

Under city rules, you can’t run a business out of one of the flex spaces, explained Kathryn Thurston, zoning administrator for the city of Wilmington. There are other rules guiding square footage and setbacks, as well as a rule for most residential and commercial districts that requires a container to be covered because it’s made of corrugated metal.

Wilker said, “We are planning to have some very nice wood cladding on the exterior of our units to warm it up a bit and break up the metal corrugation.”

Another trend with small spaces has been cropping up, even before the pandemic.

Accessory Dwelling Units (ADUs) are similar to the flex spaces Craftspace is building but involve more construction and permitting. ADUs have been part of an ongoing affordable housing discussion among local officials in the Wilmington area.

Accessory dwellings are an old idea, according to a website devoted to the structures. But “they fell out of favor in the middle of the 20th century,” an article on accessorydwellings. org states. “Now, however, they’re coming back, and they have lots of names. Planners call them ADUs (Accessory Dwelling Units), but they’re also known as granny flats, inlaw units, laneway houses, secondary dwelling units, and a hundred other names. ADUs can be tiny houses, but tiny houses aren’t always ADUs.”

Glenn Harbeck, director of planning, development and transportation for the city of Wilmington, said, “There’s definitely a pattern across the whole nation and Canada, really all of North America. If you just Goole ADUs, you’ll find that it’s a clear massive trend. In fact, in California, Washington, the West Coast, they’ve passed general state-enabling legislation that either encourages local governments to allow them or prohibits local governments from disallowing them because they’re such an efficient way of providing affordable housing.”

ADUs are expected to be another phase for Craftspace in the future.

The current backyard flex spaces being worked on “are more considered a shed, really, because they don’t include a bathroom or a kitchen; they’re really not designed necessarily for living in,” Kristof said. But they do have electricity and require an electrical permit.

Their prices are expected to start in the mid-$20,000s, Kristof said.

Craftspace is currently in production on the first flex space units and are taking pre-orders. They are also looking for investors and plan to launch a national crowdfunding campaign before the end of the year.

Kristof said, “Hopefully as we ramp up production, we’re going to need additional help with building.”