Speaking For The Water, The Trees 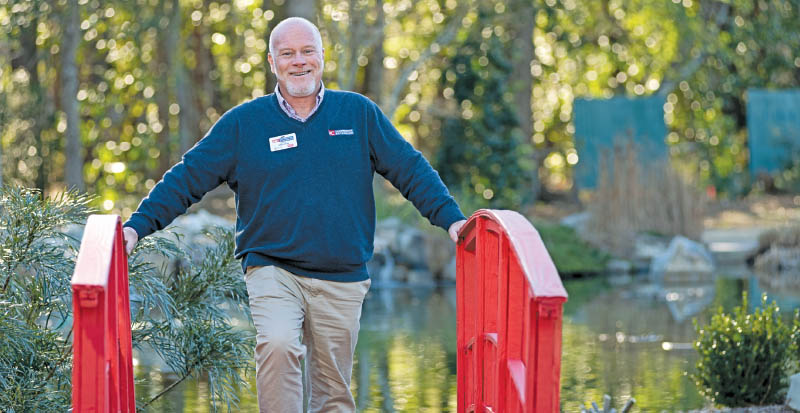 Hurricane Florence gave Singleton an almost immediate immersion into the challenges facing the county’s environment. He was just 10 days into his new job when the storm made landfall in mid-September. Its impact on the arboretum taught him lessons he wants to apply to other vulnerable portions of the county.

“This area has two critical needs: one, dealing with water, and two, trees,” he said.

Singleton has had plenty of experience with water and trees.

When he decided, at age 30, to abandon his career in financial services and follow his strong interest in horticulture, he sold his BMW, bought a mobile home in rural Florida and started a tree farm.

He later got a job at Universal Orlando and worked his way up to landscape manager, opening and expanding the theme park’s Islands of Adventure.

“I got my feet wet with landscape design and some experience on the construction side. I had a couple-million- dollar budget and 60 employees,” he said.

Recruited by The Breakers Palm Beach, Singleton served as the resort’s land manager for about six years. He learned about creating landscapes that would stand up to salty winds and hurricanes.

“I got very good at hurricane recovery,” he said.

That experience served him well post-Florence. At the arboretum, Singleton saw local water issues firsthand. The property retained an excess of stormwater, which he and his staff worked to redirect with a temporary fix. Now, with a grant from the N.C. Coastal Federation, they plan to create an infiltration zone and bio-retention area, which Singleton intends to use as a model for other property owners.

The infiltration zone is a pit, dug to the sand level and lined with rocks and gravel to allow storm runoff to reach groundwater levels more quickly.

“We need to be prepared for continued excessive rainfall,” Singleton said. “That involves constructed wetlands and use of native carnivorous plants, such as pitcher plants and Venus’ flytraps. We want to offer education on that.”

He would especially like to help landscape professionals understand how – in a rapidly developing human environment along the coast – landscape design and native plants can help minimize water problems and provide habitat for wildlife.

One project Singleton and his staff are undertaking this winter involves the arboretum’s native plant garden, with each type of plant labeled.

The concept of landscaping with native plants “doesn’t necessarily do much” for landscapers who have HOA guidelines and expectations from homeowners that seem best addressed with the use of non-native or even invasive species, Singleton acknowledged.

But he says that landscapers can achieve conventional-looking garden areas using only native plants. He honed his knowledge about what he calls “Florida-friendly landscaping” and sustainable agriculture when he became the Lake County, Florida, Extension director in 2010.

“You can apply the principles of agro-ecology to ornamental horticulture. We did it in Florida, and it really took off. I want to demonstrate that here,” he said.

At the arboretum, “we have a pollinator garden and butterfly garden that are going to be rehabbed this spring. And we will reduce our use of systemic pesticides,” he added, noting that native bees are under pressure from reduced habitat and use of pesticides.

Shifting to the subject of trees, Singleton said the biggest problem locally is lack of proper care.

“There is not a lot of good tree maintenance happening regularly,” he explained. “Large old trees need to be looked at every couple of years.”

Part of the problem, according to Singleton, is the area’s lack of certified arborists and, as a result, a lack of expert information on tree care. He’d like to see more individuals getting into this field, and has an initiative in mind to accomplish that.

Singleton would like to target 16- and 17-year-olds in the state’s criminal justice system for arborist training. They could respond well to a diversion program that offers marketable job training, he said.

The program, which Singleton hopes to launch later this year, would start with a tree surgeon boot camp. Participants would get a mix of botanical education and hands-on practice. And, says Singleton, graduates could find jobs waiting, either as certified arborists/tree surgeons or as arborists working in large nurseries. He said that certified arborists are paid better than many others in the landscaping field.

The new program will be modeled on a successful horticulture program Singleton ran in Florida that prepared 600 low-security prison inmates for jobs.

Since the arboretum is the extension’s primary classroom, Singleton plans to increase the number of activities hosted there, including launching a speaker series.

“The arboretum is in its 30th year; The Ability Garden in its 20th,” he noted. “We have a great brand and legacy, and I’m looking forward to making it bigger and better, with opportunities for future collaborations.”