Leading To Solutions For The Community 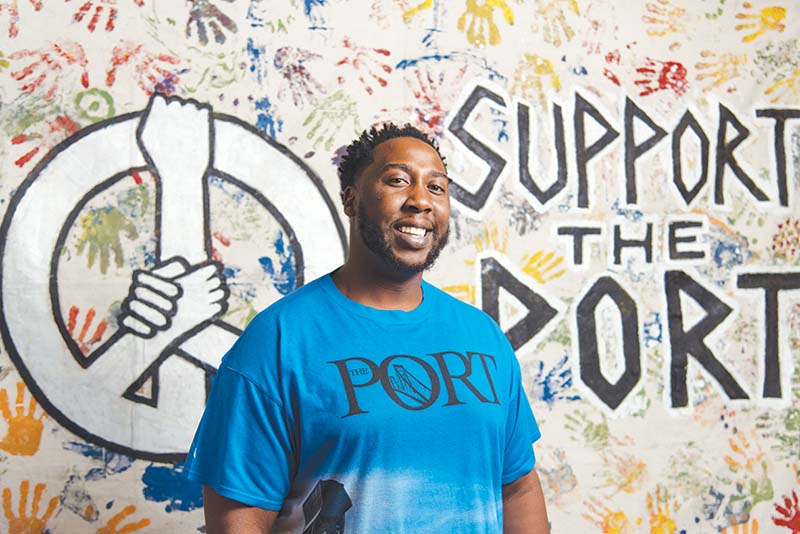 Cedric Harrison, founder of Support the Port, is shown at the organization’s headquarters on North Ninth Street in Wilmington. (Photo by Michael Cline Spencer)
Wilmington born and raised, Cedric Harrison doesn’t mince words when talking about his hometown.

“There’s a lot of problems where I’m from,” he said.

But there’s also cause for hope, including his three-year-old nonprofit Support the Port. As founder and executive director, Harrison is leading the dynamic organization in a multitude of innovative efforts to achieve its mission to “enhance, cultivate and provide a renewed sense of community ownership and excellence for residents of Wilmington,” especially the city’s African American community.

Support the Port responded with its own twist on a hurricane relief center, serving residents out of the Ebenezer Missionary Baptist Church with sought-after cleaning supplies, food, school supplies and other items, as well as connecting people with organizations providing health care and other services.

The organization estimates it helped over 3,000 people recover from the storm.

It wasn’t the first time Support the Port has jumped into action to help the local community recover from a devastating event.

In May, a fire on Greenfield Street destroyed a church and multiple businesses including Everybody’s IGA grocery store, the only source of affordable, nutritious food in that part of the city. Without a local grocery store, that area of Wilmington was poised to become a food desert.

Support the Port responded to the community need, partnering with Nourish NC to host a pop-up farmers market at 8th and Greenfield streets, giving local residents access to free farm-fresh fruits and vegetables and a hot breakfast.

“Three years in, we’re focusing on solutions,” Harrison said of the different issues he and Support the Port have identified within the Wilmington community.

A New Hanover High School grad, Harrison grew up in high-poverty, high-crime areas of the city in multiple Wilmington public housing sites. He left town to attend the University of North Carolina at Pembroke and got a taste of the big city in places such as Washington, D.C., and Atlanta.

He saw what those cities were doing to make life better for all residents, including those in low income neighborhoods, and after working with large nonprofits in Atlanta decided to come back home to Wilmington to take a similar approach.

Harrison found that a different approach was needed to improve the underserved communities in Wilmington, due in part to differences in the socioeconomic makeup.

“In D.C. and Atlanta, they are big areas for young professionals and entrepreneurs moving into communities and interacting with residents,” he said.

On the other hand, Harrison pointed out, in Wilmington the influx of young professionals is far outpaced by the influx of older retirees who settle in areas far away from the problems facing the city’s African- American and Latino communities, as well as the working poor.

“What we’re doing is bringing everyone together to get engaged in a lot of ways to build a stronger community for everybody,” Harrison said.

The organization posts information on its programs, volunteer opportunities and efforts on its website, SupportThePort.com.

Those efforts including jumping into the mix when tragedy strikes, as well as building proactive programs including free giveaways of clothing, Easter baskets and turkeys; serving the city’s homeless population; hosting “Fresh Chance Friday” career development programs for individuals transitioning back into the community; and partnering with businesses for a “Stop the Violence” signage campaign.

An innovative Support the Port program is a coloring book designed to help educate youth about the history of the African-American community in Wilmington. So far, Harrison has distributed over 4,000 copies of “Wilmington NC in Color: African-American Historical Buildings Coloring Book For the Community, By the Community” throughout the city.

Whereas the first version featured a lot of local buildings, Harrison is working on a second edition that will include drawings of African-American people designed by eighth-graders in a local arts club.

Support the Port is looking to distribute the second edition of the coloring book this February during Black History Month. Harrison will be proactively bringing the book into the community, such as speaking to children at Snipes Academy of Arts and Design, a Title 1 elementary school in Wilmington with a high percentage of students from low-income families.

Native Wilmingtonian Christa Faison teaches music at Snipes and is working with Harrison on the coloring book, in addition to planning an artistic collaboration of music and literacy featuring students from Snipes.

Having served as a volunteer for Support the Port, she says the organization is true to its name, as it seeks a holistic approach to community pride, integrating the arts, education, self-efficacy, unity and togetherness as a basis for its programming.

Faison sees Support the Port as an initiative that places a collection of positive causes and resources under one roof. As for Harrison, she calls him a visionary, team player, servant and friend to anyone he meets.

“He is a leader for our generation and a catalyst for the healing, preservation and change,” she said.

For Harrison, returning to Wilmington and creating Support the Port felt like something he needed to do.

A pipeline to software growth