A Family Business Rooted In Wilmington 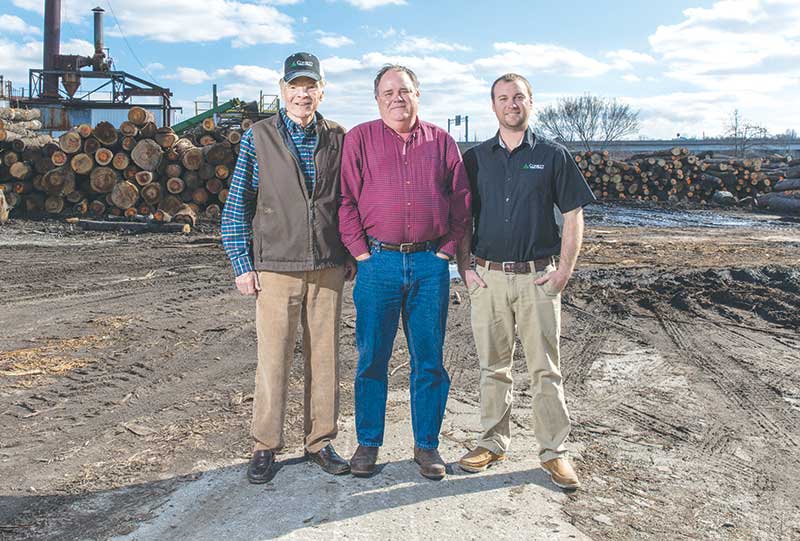 Albert Corbett (from left) stands with Eddie Corbett and Hunter Corbett outside the veneer mill on Castle Hayne Road where the family has held manufacturing operations for more than nine decades. (photo by Chris Brehmer)
One Saturday in 1926, Albert Corbett’s grandfather made a business deal that would change the course of life for members of the Corbett family for generations.

That day, his grandfather W.A. Corbett, made the trip from his Atkinson home to Wilmington to negotiate a deal with the owner of Godwin Package Co., which supplied his grandfather’s business with produce containers for his customers. But because of an increase in business at the mill, the owner said he wouldn’t be able to provide the supply that Corbett’s grandfather needed.

Sitting outside on top of logs in the mill yard, his grandfather started whittling, while slowly negotiating business with the owner for several hours. By that afternoon, Corbett’s grandfather ended up purchasing the business, the whole deal of which was made on the back of an envelope with each of their signatures.

“By the end of the day they made a deal that Godwin Package Co. would become Corbett Package Co., and he got to take care of his customers,” Albert Corbett, now the group president of Corbett Packaging Co., recalled from a story passed down by his father. “And to think in a period of a day, you could buy a business. Now it would take weeks or maybe several months of negotiating and lawyers.”

“There is just not that many family businesses that are getting into … the fourth generation. It’s not even heard of anymore,” he said.

Albert Corbett’s grandfather and his grandmother, Bertha Corbett, had six children, all of whom are no longer living. Their descendants hold ownership in various Corbett companies, but only a few are helping to operate Corbett Package Co., as it is today.

Ninety-two years after the business deal that oversaw Corbett ownership, Corbett Package Co. still holds its manufacturing operations at that same veneer mill off Castle Hayne Road, on more than 15 acres of land near Smith Creek.

There, the company uses hardwood logs to produce veneer slats that are used to make wire-bound crates. The byproduct, hardwood chips, is also merchandised by the company, he said.

“What we are doing out here is very unique. It’s a niche business,” Albert Corbett said.

Another company that the Corbetts established in the 1950s is Corbett Farming Co., and its subsidiary Corbett Timber Co., which primarily manages timberlands in Southeastern North Carolina and is engaged in the buying and merchandising of timber. Other affiliated companies include Corbett Industries and Corbett Brothers.

These are the companies still in operation today. The Corbetts, however, have had a hand in farming, sweet potato canning and a number of other manufacturing operations over the decades.

Albert Corbett said success through the generations comes by supporting each other.

“Working together is a big part of it,” he added.“I guess the most important thing is our reputation for doing the right thing. And being fair to our employees.”

Corbet Package Co. today has more than 140 employees, while Corbett Timber Co. has between 15 and 20.

Albert Corbett is now the oldest living male descendant of the family and one of four Corbetts who still play a part in operating the two businesses.

Operations of the two companies today are headed by Albert Corbett and his cousin, Eddie Corbett.

The future of business operations also lives on in the family’s fourth generation, Hunter Corbett, the son of Eddie Corbett, who has been affiliated with the timber company for several years.

Hunter Corbett today has the title of operations director for Corbett Timber Co., Albert Corbett said, adding that he is hopeful that more of the future generations will show interest in becoming involved.

Hunter Corbett, with an interest in environmental sciences and being outdoors, said he was immediately drawn to the business. In high school, he spent some summers working and learning about the company and joined full-time after graduating college in 2009.

“My whole life I always thought that that was the direction I would take anyway,” Hunter Corbett said.

He said he sees a future in the biomass side of the business, opportunities in the company’s land base, and demand for the company’s timber products. “The timber side of things has a really bright future,” he added about the company.

“I’m really looking to learn in the next couple years … how we got here and why. What is the key ingredient that makes this successful?”

Albert Corbett said there is a certain pride in knowing that he is continuing the legacy of his father and grandfather, maintaining and operating the business and doing it with family.

“I love what I do,” he said. “I enjoy the working relationship that I have with all of our family and our employees.”