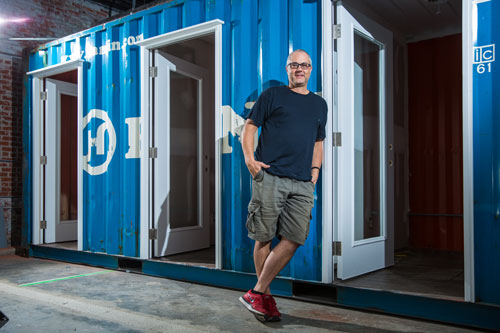 CoWorx owner Bryan Kristof is shown at the co-working space’s new spot in the Cargo District. (photo by Chris Brehmer)
As the regeneration of shipping containers accelerates globally, the Port City is about to enter the fray – big time. And why not? The shipping container, after all, was born in North Carolina.

During the depths of the Great Depression, Malcolm McLean watched longshoremen load ships in New Jersey. The Maxton, North Carolina native thought there must be a better way. It took the trucking company owner until 1956 to implement his innovative idea – use containers to reduce the cost and time to transport almost any material.

Within 10 years, the international shipping industry embraced his idea and established 20- or 40-foot stackable containers as the standard.

Today, 90 percent of the world’s goods travel in 17 million shipping containers annually. But once emptied, many containers are abandoned.

About 10 percent of all containers sit idle because of trade imbalances and repositioning costs, according to research by Hofstra University professor Jean-Paul Rodrigue.

Some of those zombie steel boxes are finding new life, far removed from their original purposes.

Leslie Smith, a local developer, definitely thinks outside the box.

He has been quietly buying property around Castle and 16th streets. Branded as the Cargo District, the area is planned to incorporate more than 200 shipping containers to create a multi-use community.

“Years ago, I saw a container home and immediately thought about doing something big, with 200 units. I loved playing with Legos as a kid, and this is nothing but Legos,”
he said.

For inspiration, Smith traveled to the Downtown Container Park in Las Vegas that consists of 40 retail outlets and was assembled in less than a year.

There are a number of other examples throughout the country. Container- housed Starbucks drive-thrus can be found in Seattle, Chicago and Salt Lake City. In California, 32 containers formed a new school. And closer to home, Asheville’s Smoky Park Supper Club serves up meals inside 19 repurposed containers.

Bryan Kristof, owner of CoWorx, is also working with Smith to market nine apartments made up of 18 shipping containers.

“We will start with three units at a time with leasing to start later this year,” Kristoff said.

Smith added that progress is contingent on availability of the shipping containers made from corten steel that weigh between 5,000 and 10,000 pounds depending on size. To enhance living space, Smith is using the less common 9-foot-high containers called “Hi-Cubes” in lengths of 40 and 45 feet. The containers cost about $3,000 each depending on condition.

The second phase of the development is planned to showcase 50 one-and two-bedroom apartments rising from over 200 intertwined containers. The new structures would utilize most of the block bordered by Castle and Queen streets, between 15th and 16th streets.

“We’re using only high-end finishes and commercial grade material,” Smith said. “You’ll be able to tell it’s made of shipping containers, but it will look classy. It will put Wilmington on the map when it comes to shipping containers – after all, we are the Port City.”

Another phoenix-like development is rising from the detritus of the old warehouse district and former public housing. Bordering Greenfield and Second streets, more than 200 apartment units are full and an expansion is planned with more housing and commercial spaces.

As part of the next phase, an abandoned shipping container provided inspiration, said Terry Espy, president of MoMentum Companies and broker for the South Front project.

“While walking around we saw a shipping container sitting on the property. We immediately thought about creating office space and conference rooms with containers to reflect the warehouse feel of the area,” she said.

Espy said drawings for a new building, developed by Andrew Iatridis at ORA
Architecture, show containers used for second-floor offices and stacked vertically for stairwells. The plan did not include cladding for the containers and initially was rejected by the city.

“We then successfully negotiated with the city using a site-specific request, emphasizing that the containers are functional objects surrounded by an industrial area,” Espy said.

Ron Sparks, chairman of Wilmington’s Board of Adjustment, helped overcome the city’s current Urban Mixed Use (UMX) code for the project.

“I told them it was wrong that they could not use metal containers as the exterior surface of a building in that area. Eventually, they agreed that the containers would not be an imposition on the industrial area. Seeing finished projects will eventually change perceptions in favor of containers,” Sparks said.

Sparks, who also owns Sparks Engineering, is currently building a 1,200-square-foot home using four, 40-foot containers without cladding for a client outside Whiteville.

Sparks shared the realities of building a metal box home.

“Expect to pay a premium for containers in pristine condition,” he said. “Cost savings compared to a stick-built home depends on the foundation needed as well as the amenities. Living in a narrow, 8-foot-wide space is confining, but sides of containers can be removed to double the space.”

In Carolina Beach, a 320-squarefoot home sits on a tenth-of-an-acre and was on the market recently for about $230,000. As transformed shipping containers sprout, Sparks said there is also an underground movement.

“Clients have asked to convert a container to a hurricane shelter, swimming pool and bomb shelter,” he said.

Looming on Wilmington’s horizon is a potential office building made with shipping containers at Wooster and Third streets.

The project is tabled until the location of the proposed Cape Fear Crossing, a new route over the Cape Fear River, is identified.

“The city said we would have to clad them,” Espy said about the office building concept, “but I believe containers could not be more apropos for the port region.”