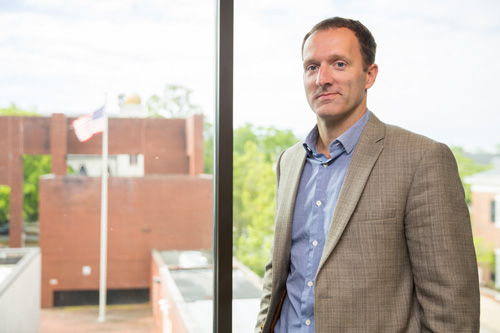 Considering the fact that the group matched 164 people with employment in 2016, that goal is a leap.

It’s a leap of faith, said executive director Will Rikard, but setting that goal demonstrates Phoenix’s commitment to making a significant impact on reducing local poverty.

“As an organization we said we know the need is there. The question is, how do we raise the money to support [the goal]; how do we get there?”

In the 20 months since that merger, the organization’s job placement rate has more than doubled. Phoenix has outgrown the training space in its third-floor offices at the Harrelson Center downtown and now holds its sessions at area churches.

The organization provides two programs: a 32-hour employment training class to prepare individuals to be successful employees and a nine-month life skills class for them once they are on the job, to ensure they have the personal and financial literacy skills to stay on the job and prosper. In 2016, 260 people started the employment training class, 218 of them graduated and 164 were placed in a job.

That has a sizeable economic impact, according to Rikard, who says 80 percent of those placed will keep their job for at least a year. If they earn an average of $10 per hour, those 164 workers will earn more than $2.7 million in wages each year.

Phoenix Hometown Hires, however, isn’t limiting its vision to its goal regarding numbers of new workers in jobs.

“The next phase for us is looking at better jobs for our graduates,” Rikard said. “Their median wage is $9 per hour, so how do you get people beyond that? A big part of [graduates’] success is life skills, but we have to get them hard skills as well.”

Phoenix works closely with Cape Fear Community College to identify what kinds of skills the area market needs and to get its working graduates matched with appropriate training.

“We change the way people think. If they can’t get a job, they can change their skills, become more adaptable. Companies are hiring, not out of the goodness of their hearts, but based on what they need.”

The challenge for Phoenix in scaling up is to not stretch its staff too far. Increased funding, able volunteers, frequent communications and wise use of technology are keys to a growing operation, Rikard said.

“Everything we do is very intentional,” he said.