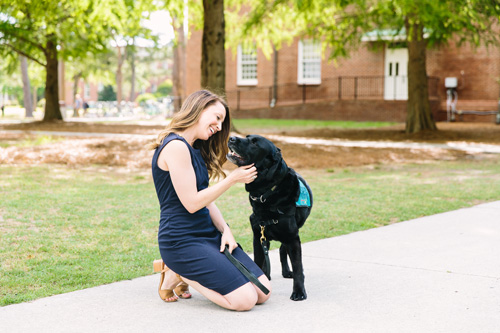 Kyria Henry, executive director | Year Founded: 1999 | No. of Employees: 12 (Photo by Lindsey A. Miller)
At paws4people, dogs are do-gooders.

What began as a young girl’s desire to see puppies visit nursing homes is now a far-flung enterprise that makes life better for children, adolescents, veterans and active-duty service members.

Trained to do everything from flipping a light switch to interrupting an anxiety attack, the dogs that paws4people donates to individuals with physical, neurological, psychiatric or emotional disabilities provide both critical assistance and companionship, helping the disabled get through each day.

Kyria Henry, the 12-year-old with a glint in her eye who knew that dogs could do much more than fetch, is now the executive director of paws4people. The organization moved to Wilmington from northern Virginia six years ago at the invitation of clients.

By the time Henry set down roots in the Port City with her father, a veteran, the nonprofit had developed a thoughtful approach to raising, training and placing the Golden Retrievers and Labs that serve as lifelong helpmates. About 500 caring canines are now paired with eligible clients in 25 states and one Canadian province.

For the first six weeks of their lives, pups remain in a room at the nonprofit’s Hampstead facility and are exposed to sounds, toys and textures as well as the human touch of volunteers. Next, they are moved to another room to be taught basic commands until they reach 18 weeks and are also taken to community events for socialization.

Then, from 18 weeks to 14 months, the dogs move to one of five correctional facilities in West Virginia where they are paired with inmates.

“That really grew and flourished while I was in college,” said Henry, a graduate of West Virginia University. “The inmates teach the dogs 80 percent of what they will learn,” or more than 100 commands including opening cabinets, retrieving items from a refrigerator and helping maneuver a wheelchair, she explained.

When they’re ready, the dogs are introduced to a group of prospective human partners who visit the prison. Each dog chooses a partner for life based on initial interactions and also gets specialized training to meet its new friend’s unique needs.

“We’re one of the few if not the only organization that does it that way,” Henry noted.

“We accept one application out of every 50,” Henry said, with approved clients split about evenly between civilians and past and present military members.

Staff members monitor the degree of improvement that an assistance dog provides to its human partner, who is required to receive counseling from a medical clinician.

“We are able to revoke custody if we feel a dog is not being utilized,” Henry said.

That’s important, in part, because the cost of a fully trained dog runs upwards of $40,000, and the four-legged friends are offered to clients free of charge.

To remain both financially stable and accountable, paws4people keeps overhead low, with salaries modest and the program’s canine graduation rate, 92 percent, at double the industry average.

According to the nonprofit’s annual report, net interest in 2016 stood at $2.2 million, and paws4people applies 95 cents of every dollar raised to expenses.

“I don’t think a 40 to 60 percent ROI on donor money is acceptable,” Henry said.

Henry’s father, Terry, who has helped guide the growth of his daughter’s organization, is pleased with the impact that it continues to have on clients.

He recalls one ex-Marine who spent months attempting to commit suicide before committing to the program.

“He got to the point where he was at least able to function and wanted to live,” Terry Henry related, adding that the father of two is now pursuing a master’s degree. “If they want to get better and they see themselves getting better using the dog, it becomes a self-fulfilling prophecy.”

In 2018 paws4people hopes to solidify its presence in the region by building a permanent headquarters that will bring breeding, training, administrative and meeting space under one roof and also allow visiting clients who currently stay in hotels to remain at the facility overnight.